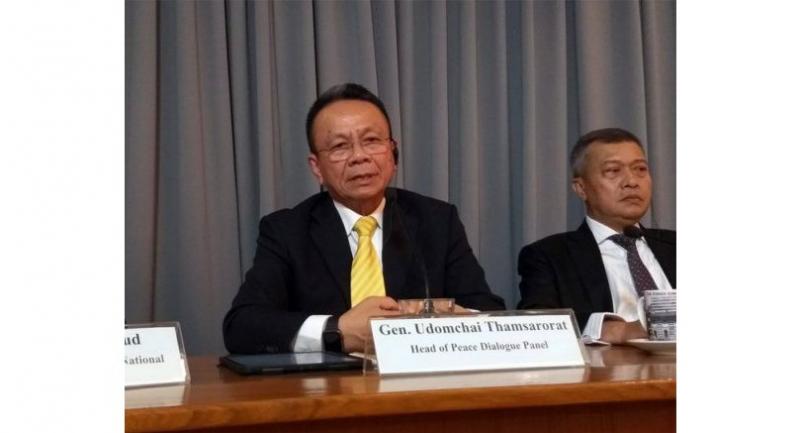 DAILY VIOLENCE continues in the deep South as moves to establish peace talks failed yet again after MARA Patani insurgents said they wanted to suspend negotiations until an elected government takes office in Thailand.

General Udomchai Thamsarorat, the chief negotiator on the Thai side, told media that he aimed to meet MARA Patani leader Shukri Hari in Malaysia this week not to hold talks but merely to make contact in person.
“I visited Kuala Lumpur to also meet Malaysian facilitator Abdul Rahim Noor, without the specific aim of talking with any particular group,” Udomchai told Isranews. He added that MARA Patani was, in fact, scheduled to meet a Thai working group led by Kriangkrai Sriraksa to set the procedure of the peace talks.
However, MARA Patani had issued a statement earlier saying it had suspended talks with Udomchai because it was disappointed by his attitude.
“Both Mara Patani and the Thai dialogue teams arrived in Kuala Lumpur on February 2 for the introductory meeting. However, we were informed that General Udomchai would not attend the meeting. He would only meet me [Shukri Hari] personally and separately.
“We are disappointed with General Udomchai’s attitude, which contradicts his earlier statement that he would hold a dialogue and respect all groups and stakeholders,” the group said in a statement handed over to Bernama on Sunday.
The predominantly Muslim South of Thailand has been rocked by violence since early 2004 claiming nearly 7,000 lives so far, as authorities in Bangkok struggle to restore peace.
Separately, a Muslim Tadika schoolteacher in Songkhla’s Saba Yoi district has been taken into military custody for allegedly being involved in a pick-up truck bomb attack near a police station in Thepha district on January 8, Colonel Pramote Phrom-in said yesterday. The colonel is spokesman for the forward command of the Fourth Region Internal Security Operation Command.
Sakariya Sama-ae was implicated by those previously arrested over the incident, and was taken to the Pattani-based Inkhayuth Military Camp for questioning on February 2, Pramote said.
“Investigation shows that Sakariya Sama-ae had been detained for questioning over his alleged role in the 2014 bomb attack in downtown Hat Yai,” Pramote said, adding the teacher had reportedly admitted to having links with insurgents.
Pramote said Sakariya’s apprehension had been done carefully and by the book, as the authorities did not want ill-intentioned people to twist the facts and use this as a reason to accuse the authorities of bullying a Muslim Tadika teacher in order to build support, as has been done before.
The January 8 pick-up truck explosion injured two police officers and the authorities later learned that the vehicle’s owner – retired teacher Amata Samothanthawee, 63 – had been murdered and his truck stolen.
In another incident, a policeman sustained injuries from gunshots in Narathiwat on Monday night, in what is believed to be an ambush by an unknown number of insurgents.
The Sungai Kolok Police Station was alerted of the shooting on the road leading to Narathiwat Taskforce 33 base at 9.55pm. Pol Sergeant Muhammad Faisal Mayako, 21, was shot in his left thigh while riding a motorcycle to the base for his night shift.
He is in hospital now. Police said the insurgents also dropped nails on the road leading to the base, puncturing the tyres of several vehicles.