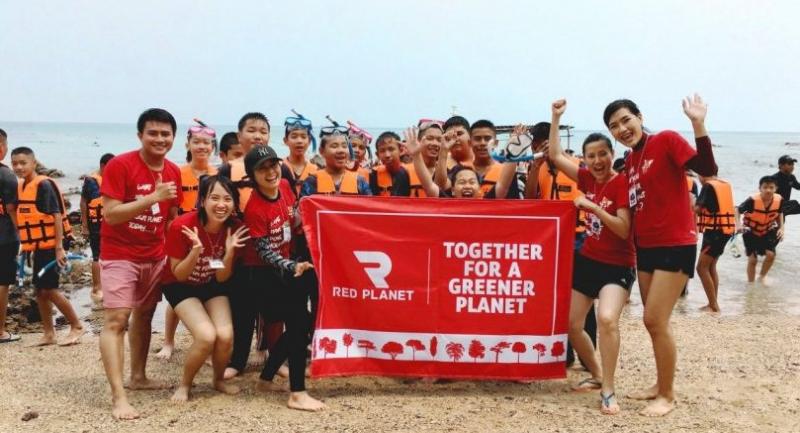 In line with Red Planet Hotels’ uncompromising support of environmental causes, within the past year alone the rapidly growing hotel group has partnered with 4Ocean, Earth Hour, and a number of local conservation NGOs to cement the brand’s commitment to responsible tourism.
The activity was held on April 16.

“The travel and hospitality industry needs to play a growing role in fighting climate change and its devastating effects on marine life. Especially in popular travel destinations where tourism and pollution are ultimately killing coral ecosystems, we must spring into action to restore the damaged coral fragments, and nurture them into new, healthy reefs,” said Red Planet Chief Executive Officer, Tim Hansing.
“Red Planet’s ethos is that we must act urgently to arrest this global calamity, and I am proud that Red Planet Thailand is playing an increasingly active role to highlight ways to mitigate environmental degradation,” Hansing added.

The coral reef planting initiative is in addition to Red Planet’s green milestones that are aimed to reduce environmental impact. “We are becoming a plastic-free hotel chain,” said Red Planet Thailand’s Director of Operations, Poonnapha Tritanachart.

“We have reviewed all of our procedures and procurement strategies, and are progressively removing single-use plastic from each hotel, including back-of-house operations.”

Red Planet’s green initiatives will continue to expand in the following months, according to the press release.

Red Planet seeks to tie up with further local and global organisations to both increase awareness of environmental causes as well as to continually evolve its own operational practices as a way to ease the travel industry’s footprint on the planet.

Red Planet Hotels is a leading Asian budget hotel chain with five hotels in Thailand and another 25 hotels operating in Indonesia, Japan, and the Philippines, said the press release.