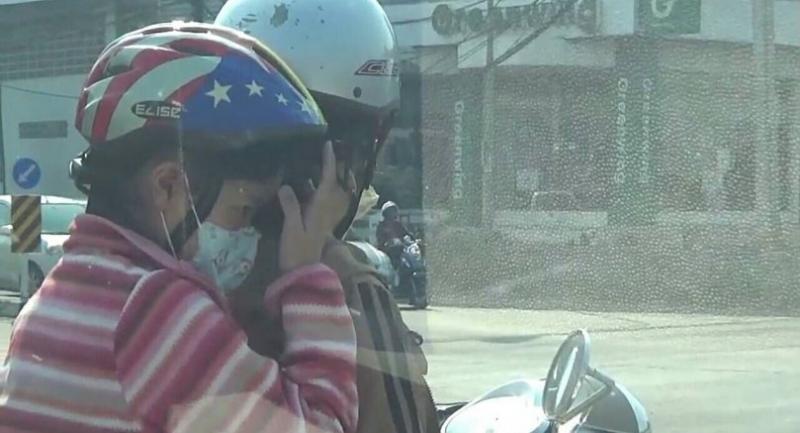 A medical report has pointed to serious health threats from air pollution in smog-prone areas, and the northern region was found to be a hotspot for asthma and other major respiratory diseases.

The higher death rate from three main respiratory diseases – asthma, lung cancer and chronic obstructive pulmonary disease (COPD) – in the northern region, which was disclosed in the study on geographical inequalities of mortality in Thailand by Suchunya Aungkulanon’s research team, highlighted that health threats from air pollution are real.
The result of this study was related to reports about air pollution and asthma by World Health Organisation (WHO) and UN Environment on the occasion of World Asthma Day yesterday, which emphasised that air pollution was the major factor behind the severe asthma situation around the world.
The report, first published in the International Journal for Equity in Health in December 2016, revealed that from the study of standardised mortality ratio of 12 major health threats based on each locality in Thailand during the period from 2001 to 2014, it was found that there was a noticeable clustering of high mortality from asthma, lung cancer and COPD in almost every province in the northern region.

Even though the report did not confirm a clear connection between the high mortality rate from respiratory diseases in this part of Thailand and the northern seasonal smog, it hinted that the cluster of respiratory diseases in the North may be a reflection of the severity of the air pollution crisis in the area.
The report also found a considerably high death rate from asthma in the southern region, as five provinces in the deep South – Satun, Songkhla, Pattani, Yala and Narathiwat – were depicted in red on the geographical annual cause-specific standardised mortality ratio map.
The northern region and the deep South were two prominent regions affected the most by seasonal smog. The smog in the South, primarily caused by wildfires and deforestation in Indonesia, has largely been resolved in recent years. The North, however, was still continuously suffering from dense smog of very fine PM2.5 particulate matter every dry season.
Dr Chanchai Sittipunt, a medical lecturer at Chulalongkorn University and vice president of Thoracic Society of Thailand, said the research result was interesting, as it showed evidence of localised air pollution affecting people’s health. More studies will be needed to clarify the influence of each factor on the high mortality rate from respiratory diseases there, he added.
“PM2.5 ambient particulate matters are not the only bad guys here; there are several other factors that could trigger respiratory diseases, for instance individual smoking habits, indoor air pollution from cooking and second-hand smoke,” Chanchai said.
“However, this study is giving us a very clear message: that the authorities and every stakeholder should do something right now to protect the people from exposure to hazardous air pollution and prevent the long-term serious health threats from the seasonal smog problem.”
According to 2015 statistics with the Public Health Ministry of patients suffering from respiratory diseases, there were 115,577 asthma patients and 249,742 COPD patients in the hospitals. The report by Aungkulanon’s team also showed an increasing trend of COPD and lung cancer rates in the North.
WHO estimates that at least 235 million people around the world are currently suffering from asthma, while around 383,000 people died from this incurable chronic disease in 2015 alone.
It was noted by WHO that the strongest risk factor for developing asthma is an environmental exposure to inhaled substances and particles that may provoke allergic reactions or irritate the airways.