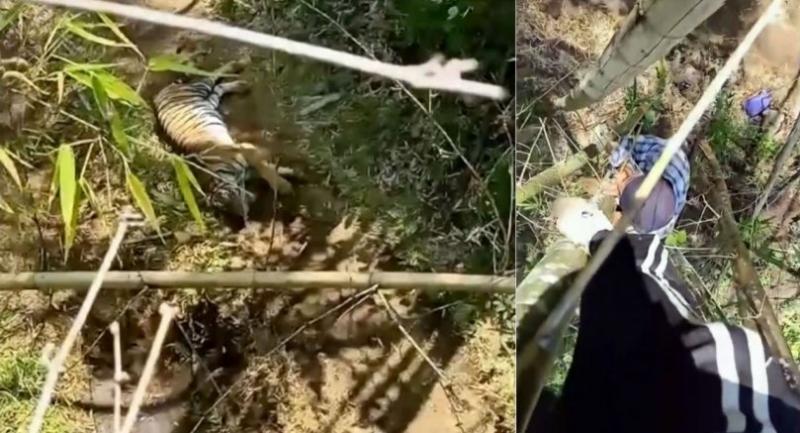 WICHIEN CHINNAWONG, chief of the Thung Yai Naresuan wildlife sanctuary in Kanchanaburi, plans to propose that the Department of National Park Wildlife and Plant Conservation close the Thung Yai forest for six months during the rainy season.

He said 12 tigers had been seen on trap cameras in the forest, suggesting it was highly fertile. To help natural resources to flourish, Wichien said he would ask the department to close Thung Yai forest. The plan followed a 30-minute video by a teacher, Supranee Panasuksan, that showed a Karen woman, identified as Po-che, and her husband meeting a tiger on a path. They were near their village in Tambon Lai Wo, Sangkhla Buri district. The couple abandoned their motorcycle and climbed a tree although the tiger was not hostile.
The tiger circled the spot where they left the motorcycle and rolled on the ground before leaving.
Po-che recalled her scary encounter with the tiger, which took place on a path out of bounds to the general and only open for park officials and residents of the forest-dwelling village.
She said she and her husband had been terrified
to see the animal in front of their motorcycle, prompting them to abandon the vehicle and belongings to scramble for the roadside bamboo trees to climb away from the animal.
She recalled that she was both afraid and angry … afraid of the tiger and angry at her husband for climbing the same tree as her, and their combined weight could have brought the tree down and put both their lives in danger.
The video clip of the episode is regarded as the country’s longest recording of tiger behaviour by anyone other than an official or academic.
Wichien said it was rare for people to come across a wild tiger because the animals normally avoid people.
He dismissed claims it was from the closed Wat Pha Luangta Bua Yannasampanno, which famously kept tigers, and had since been released into the forest. “The tiger in this video clip is a wild tiger,” he said, explaining that a tame tiger would not be able to survive in the wild as it would not be able to hunt.
He refused to give details of where the incident took place out of fears it would attract poachers.