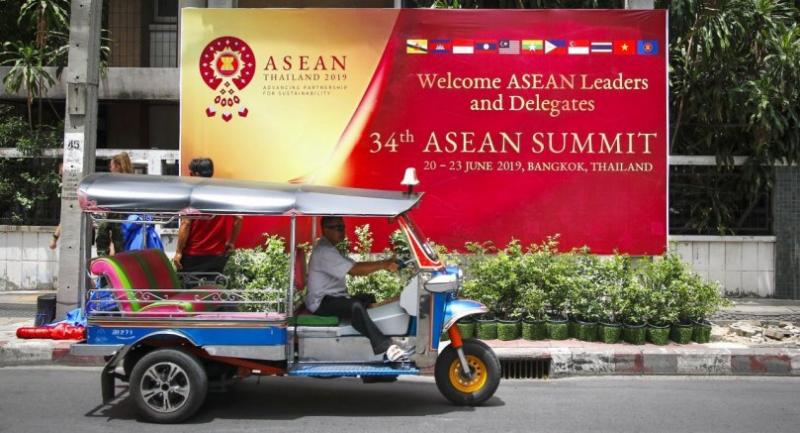 No room for civil society groups at Asean Summit

ASEAN CIVIL groups and representatives of people’s organisations will once again be denied an interface meeting with leaders during the 34th summit in Bangkok this weekend, as they failed to convene a parallel meeting, Asean officials and organisers said.
The Asean Civil Society and People Forum (ACSC/APF) was supposed to hold their meeting in the middle of this month to finalise issues and demands to be exchanged with leaders during the summit. The meeting was delayed until September.
Though they will not be permitted to discuss issues with leaders of Asean nations, the groups may be allowed to meet with senior officials of Asean, Foreign Ministry director-general of Asean Affairs, Suriya Chindawongse, said.
Representatives of three groups – Asean Inter-Parliamentary Assembly (AIPA), Asean Youth, and Asean Business Advisory Council (ABAC) – will meet with leaders on June 22.
The ACSC/APF has not managed to have an interface dialogue with leaders for three consecutive years. The last meeting between the civil society groups and Asean leaders took place during Malaysia’s chairmanship in 2015. At last year’s Asean meeting with Singapore as chair, a meeting with the People Forum was restricted financially and isolated from the leaders’ summit.
As the host country, Thailand is tasked with initiating the interface meetings between the civil society sector and leaders. It would try its best to arrange such a meeting during another summit in November, a Thai Foreign Ministry official said on condition of anonymity.

Chalida Tajaroensak, director of the People Empower Foundation (PEF), one of the 2019 ACSC/APF steering committee members, said the failure this time reflected the “controlled partnership” preferences of leaders, in which they decided to instead meet with self-appointed representatives and business groups.
Regarding the summit’s refusal to meet with the group, Chalida said their organising committee had submitted the names of representatives to the Senior Officials Meeting for the Asean Socio-Cultural Community.
She said the member states failed to reach a consensus to meet with the civil society organisations (CSOs). Only the delegates of Thailand, Malaysia and Indonesia supported the proposed interface, while two countries rejected it and the rest were silent.
Still, with another opportunity still possible at the second summit in November, Chalida said the CSOs need to rethink their engagement strategy so it would lead to a meaningful partnership.
“The CSOs must review how to be a partner with the states, whether street protests to pressure, or [alternatively] diplomacy, would work to effectively convey the people’s demands to the governments,” Chalida said. “In order to bridge the barrier, they must shift to people’s diplomacy.”
There are different degrees of support and confrontation between the states and CSOs in the many Asean countries, she said. Regional cross-cutting talks among the CSOs are needed in order to craft a strategy to deal with the states on the Asean stage.
There is a wide spectrum among Asean CSOs in terms of their agenda, stance and affiliations. Each state has its own way of dealing with the civil sector, including implementing registration to establish its own civil groups, known as government-organised non-governmental organisation.
One incident that reflected the spectrum of CSOs occurred at the 2017 ACSC/APF meeting in the Philippines. Some CSOs from Laos and Vietnam urged the group’s statement not to mention human rights violation cases in the region. The Laos CSOs also demanded that the statement not mention the disappearance of Sombath Somphone, a Lao development activist who went missing in Vientiane in 2012.

The national flag of Myanmar in front of a large poster welcoming ASEAN leaders to the 34th ASEAN Summit in Bangkok, Thailand, 19 June 2019. // EPA-EFE PHOTORepresentatives of three groups – Debby Stohard from the Alternative Asean Network for Burma, an NGO working on democracy issues in Myanmar, criticised the state’s exclusion of its citizens. She noted that people in Cambodia, Vietnam and other countries are judicially and physically harassed when they speak out about unsustainable development or express opinions on the internet.
“We ask Asean governments and leaders: please check the dictionary for the meaning of ‘partnership’ – because they have not been behaving in partnership with the citizens of this region”, said Stohard in a public panel.
Rachel Arinii Judhistari, Asean programme manager of Forum-Asia, one of the ACSC/APF steering committee members, called for Asean nations to truly respect the rights of people in responding to its “people-centred” principle.
“This year the AICHR [Asean Intergovernmental Commission on Human Rights] will turn 10. Use this anniversary to advance a ‘people-centred’ Asean, where the rights of the people of Southeast Asia will be respected. “Asean aspires to be people-centred, as it has stated in its Asean 2025 blueprint. However, in reality, many CSOs are facing curtailment of civic space in their countries, which is contributing to the silencing of dissenting voices.”