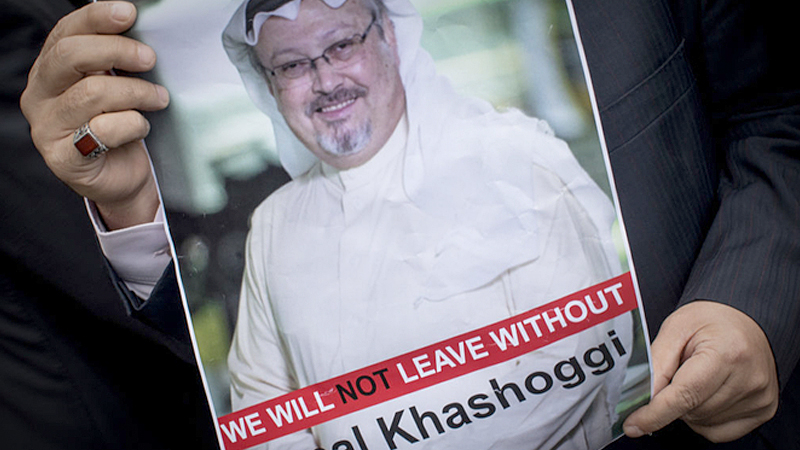 The verdict, read out by the public prosecutor on Monday in Riyadh, is unlikely to mute criticism in the U.S. against the kingdom and Prince Mohammed for the murder of the Washington Post contributing columnist by government agents in Istanbul.

While Prince Mohammed has repeatedly denied sanctioning the killing, U.S. lawmakers and CIA analysts concluded it couldn't have taken place without his knowledge. The accusations focused on two of his key aides, royal court adviser Saud al-Qahtani and top intelligence official Ahmed Alassiri.

The sentencing probably won't "turn off the fires that started after the Khashoggi issue in the U.S. Congress," said Ayham Kamel, head of Middle East and North Africa research at Eurasia Group, a consultancy.

"There seems to be an effort not to implicate the most significant or senior officials who were once close to the crown prince," said Kamel. "The viewpoint in the U.S. and in Europe is that it's difficult to imagine that a decision of this magnitude would've been carried out by junior officials without directive from their seniors."

Three out of 11 who stood trial for the murder at the kingdom's consulate in Istanbul were given a total of 24-year prison terms. The court found three others not guilty. It didn't identify any of those who were convicted.

Khashoggi's killing drew global condemnation, bruising the reputation of Prince Mohammed as a reformer of Saudi Arabia and prompting bipartisan efforts in the U.S. Congress to limit arms sales to the kingdom. Republican Senator Lindsey Graham called him a "wrecking ball" and "toxic" figure.

President Donald Trump has repeatedly defended the prince and shielded the kingdom against any major retaliation by lawmakers.

Prince Mohammed has denounced the murder, and, in a September interview for CBS's "60 Minutes" said he took "full responsibility" for it. Asked how he could have been unaware of the operation, he said he can't know "what 3 million people working for the Saudi government do daily."

The finding that Khashoggi's murder on Oct. 2, 2018, was not premeditated also contradicts conclusions by Turkish authorities and Western intelligence services.

A report by the United Nations Special Rapporteur Agnes Callamard found that Saudi agents were recorded discussing how to dismember Khashoggi's body several minutes before he had entered the consulate, referring to him as a "sacrificial lamb."

Callamard has recommended further investigation into Prince Mohammed and al-Qahtani over Khashoggi's murder and has called the murder a "state killing" that should prompt world leaders to reconsider having the Group of 20 summit in Riyadh next November.

Turkey's Foreign Ministry criticized the verdict on Monday, saying it failed to shed light on who ordered the murder.

A prominent Saudi journalist and government insider, Khashoggi never considered himself a dissident. But in 2017, as a crackdown on domestic dissent under Prince Mohammed intensified, Khashoggi fled, fearing he could be detained. He settled in the U.S., penning a series of critical columns for the Washington Post.

The 59-year-old went to the Saudi consulate to obtain paperwork for his marriage. He was killed by a team of government agents that lay in wait for him. His body was never recovered.

Saudi officials initially said Khashoggi had left the Istanbul consulate on his own, then claimed he died in an interrogation gone awry. A stream of leaks from Turkish intelligence officials repeatedly undermined the Saudi attempts to explain away the death.

The trial began in January, according to local media. Nine sessions were held before Monday's sentencing, according to Shalaan. Representatives of the Turkish government, Saudi human rights groups and the five permanent members of the UN Security Council were allowed to attend, but the media had been banned from covering the trial.