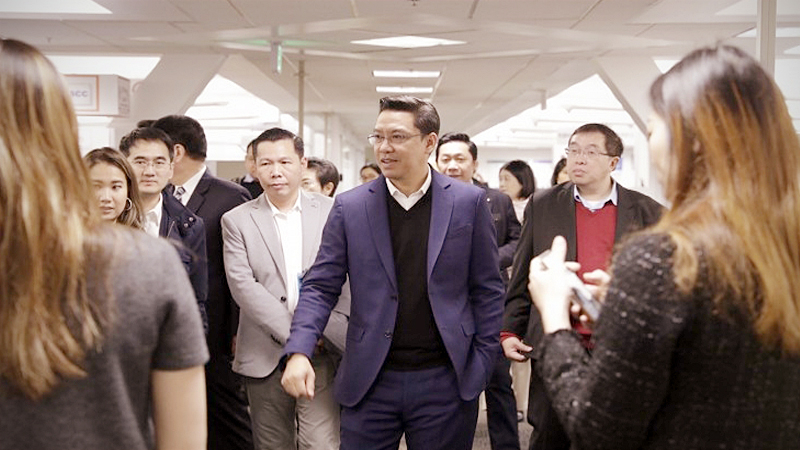 Minister Buddhipongse Punnakanta said that he and his team held talks with directors of Facebook, the world’s largest social network, in Silicon Valley, United States.

They discussed various issues, including how to work together, in four areas:
1. Creating awareness of people’s privacy on how to be safe online, as well as providing knowledge for small and medium-sized enterprises on the protocol needed for conducting business.
2. Encouraging people to participate in the economy and digital society, especially enabling people with visual, hearing, and physical disabilities, including those who have difficulty in learning to take advantage of technology.
“We also have an idea to host a Hackathon competition to create technology for helping people with disabilities; many projects in the past have achieved success,” Buddhipongse said.
3. Setting commercial guidelines, such as collecting tax on advertisement trading in Thailand, controlling counterfeit or illegal products sold on Facebook.
4. Discussing cooperation to solve the problems of fake news and inappropriate content on Facebook, such as the process of deleting fake accounts or information.
“During the discussion, Facebook's directors even said the feature on Marketplace had inspiration from Thai people, because several Thais used Facebook to sell goods, using interesting and innovative ways to apply social media to online sales,” Buddhipongse said.
Buddhipongse also met with a group of Thais who work at Facebook and with students at Stanford University. He told them that if they got the opportunity, they should return to Thailand to help because they are the country’s hopes.
“This new generation has high potential. If they receive support and opportunities, they will use their capabilities to greatly develop the country’s digital industry,” he added.