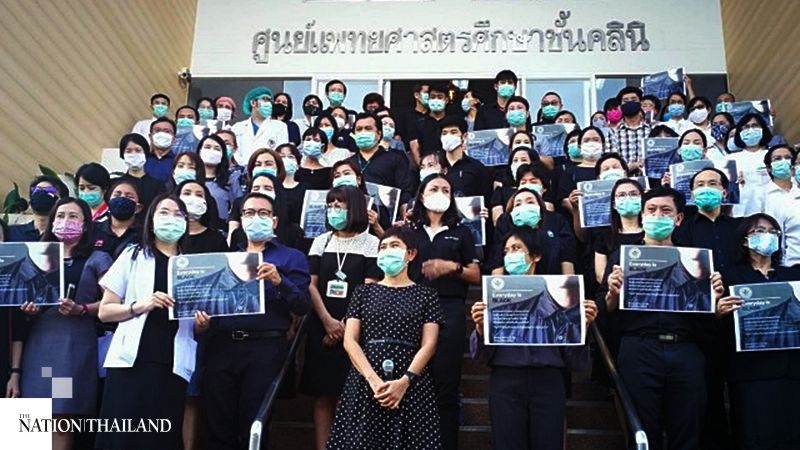 Khon Kaen Hospital’s medical organisation is demanding that their former director Dr Charnchai Chanvorachaikul be allowed to return to the hospital, saying they do not trust the Public Health Ministry’s investigation into allegations against the doctor.

Charnchai had been transferred earlier this month over allegations of getting kickbacks from a pharmaceutical firm, an allegation the doctor has denied.
Dr Kanokwan Sriruksa, president of the medical organisation, led a peaceful protest at the hospital on Tuesday (June 16) to ask for the return of the director.
She also thanked acting director Dr Kriangsak Watcharanukulkiat, who recently quit his post. He was previously the director of Prapokklao Hospital in Chanthaburi and had been brought in to replace Charnchai.
Kanokwan said the hospital was not trying to get rid of Kriangsak, but was not very keen on the director’s job being given to the deputy director or an outsider.
“Even though Dr Kriangsak has resigned, he had been placed through an order from the Public Health Ministry’s permanent secretary,” she said.
She also said that there was no evidence to back the accusation against Charnchai, so his subsequent transfer was unfair. Besides, she said, the doctor has been very efficient in dealing with Covid-19 cases.
“We are also dissatisfied with the fact that the chief investigator is an associate of Dr Kriangsak,” Kanokwan said. “If the ministry has problems finding proper investigators then it should consider handing the case over to one of the national graft bodies or to the Department of Special Investigation.”
Meanwhile, Public Health Minister Anutin Charnvirakul said he has started working on the matter of Kriangsak’s replacement as requested by the organisation.