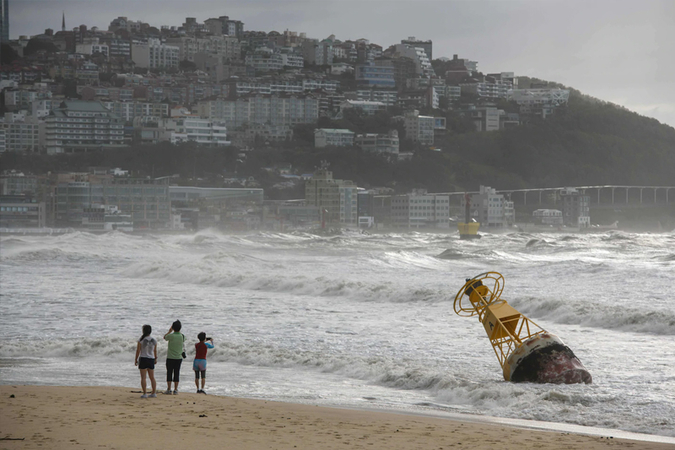 Typhoon Haishen rapidly intensified on Thursday over the warm waters of the West Pacific Ocean, and is forecast to hit southwestern Japan this weekend, to be followed by landfall in South Korea. Assuming the storm takes this track, it will be the third typhoon in as many weeks to hit the Korean Peninsula and the fifth this year.

The Joint Typhoon Warning Center predicts the storm could hit Japan as the equivalent to a Category 3 storm, before moving northwestward into South Korea as a Category 2 storm. In fact, the current forecast shows the storm passing close to Seoul on Sept. 7, with maximum sustained winds of 90 mph (though they would be stronger at landfall).

If it follows this forecast, it would become only the seventh Category 2 or greater typhoon to strike South Korea since 1959, according to a database of tropical cyclones from the National Oceanic and Atmospheric Administration (NOAA). It would also break the record for the most landfalling storms in a single season, according to Sayaka Mori, a meteorologist for NHK World.

South Korea and Japan's Kyushu Island are just cleaning up after Typhoon Maysak, which struck the Korean port city of Busan and sunk a cargo ship in the East China Sea, with 43 crew members and 5,800 cattle aboard.

As Typhoon Maysak came ashore, a barometer located on Geoje Island recorded a minimum air pressure reading of 952.5 millibars, just above the all-time national record low of 951.5 millibars set during Typhoon Sarah in 1959. In general, the lower the pressure, the stronger the storm.

The prospect of yet another typhoon, this one possibly turning out to be even stronger than Maysak, is ominous for those in North and South Korea who have seen flooding rains, wind damage and storm surge flooding due to the storms so far this season. Despite the persistent storm track into southwestern Japan and the Korean Peninsula, Typhoon Haishen may dodge the only main impediment to its potential intensity - a cold wake of water left behind from the previous storms.

Instead, Haishen is moving further east than Maysak did, over waters that are unusually warm, at about 86 degrees, offering plenty of energy and moisture for an intensifying typhoon.

Computer models show Haishen reaching Category 4 status before gradually weakening as it moves across Japan's Kyushu Islands and on to South Korea, but it is possible the storm will intensify further, reaching super typhoon status with maximum sustained winds of at least 150 mph.