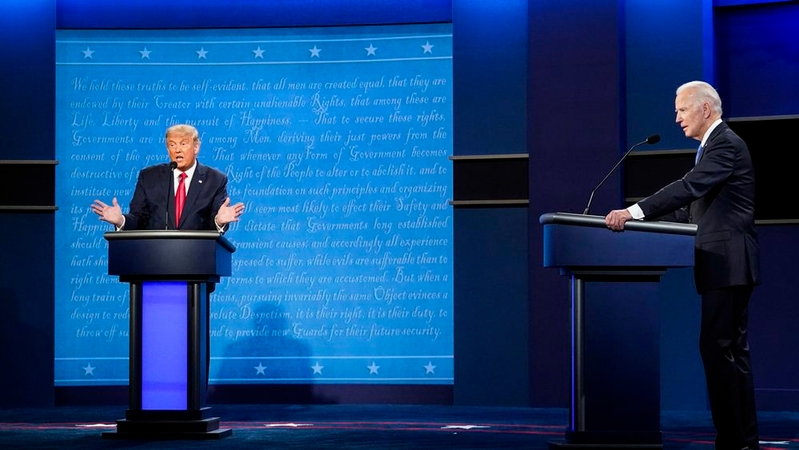 GOP effort to invalidate more than 2.5 million votes in Pennsylvania dealt another setback

Republicans faced another procedural setback in a Pennsylvania lawsuit seeking to invalidate more than 2.5 million votes, as a temporary order blocking further certification of election results was stayed on appeal from state officials who had already formalized President-elect Joe Biden's win the day before.

Legal experts said the case had little chance of success, much like the other last-ditch GOP election lawsuits pending in battleground states. Republicans have gained no substantive traction across more than two dozen cases trying to undo results favoring Biden since Election Day, and as of Tuesday, four of six states where President Donald Trump tried to overturn the outcome have certified Biden's win.

In the Pennsylvania case, Republican plaintiffs are retroactively challenging the state's mail-voting system, calling into question virtually every contest that took place there on Nov. 3 and asking for judges to take the unprecedented step of voiding election results across the state.

On Wednesday morning, Commonwealth Court Judge Patricia McCullough, who was elected as a Republican in 2009, placed a hold on the certification process for downballot races pending an evidentiary hearing. State officials appealed to the Pennsylvania Supreme Court later Wednesday, which triggered an automatic stay of McCullough's order. They then asked the state high court to step in and dismiss the case altogether.

"The Commonwealth Court's Order threatens to disrupt the certification of every race in the 2020 general election; foreclose the seating of elected representatives; indefinitely postpone the December 1 start of the General Assembly's term; undermine the will of the voters; and cast a wholly unwarranted cloud over Pennsylvania's election results," lawyers for the state wrote in a filing.

Legal experts said it was unlikely that judges assigned to the case would ultimately grant a request to change the rules of an election after the fact in a way that disenfranchises millions of people.

"It basically says Pennsylvania had something other than an election, which is another explanation for why it's not going anywhere," he said.

McCullough's order followed a late-night filing by Republicans speculating that Secretary of the Commonwealth Kathy Boockvar, a Democrat, might have accelerated certification of the presidential results on Tuesday to avoid a possible injunction stemming from their case.

Boockvar stated Tuesday that she certified the results for president and vice president and that Gov. Tom Wolf, a Democrat, signed the Certificate of Ascertainment for Biden's slate of electors, adding that the certificate was submitted to the archivist of the United States.

Separately, Pennsylvania Republicans sought to build support for their voter fraud claims on Wednesday with an hours-long, largely maskless indoor news event at a Wyndham Hotel in Gettysburg.

Led by Republican state legislators, the gathering featured Trump lawyer Rudy Giuliani and adviser Jenna Ellis alongside Pennsylvanians who voiced suspicions that the election was dishonest based on their experiences as observers. At one point, Trump called in via Giuliani's cellphone, telling the room and people watching online that "we have to turn the election over."

Trump had planned to attend the event in person, which caught advisers by surprise, including campaign attorney Justin Clark, Republican National Committee Chairwoman Ronna McDaniel and many others close to the president, three people involved with the campaign said on the condition of anonymity because they were not authorized to speak. Efforts were made to talk Trump out of the trip, but he continued to say it would be a good idea to appear with Giuliani, the people said. They said Trump told several advisers that he appreciated Giuliani wanted to keep fighting, while he believed they were prematurely declaring defeat.

By Wednesday morning, the president had decided not to go, even as his team whirred into motion to make the Thanksgiving Eve trip happen. "Bullet dodged," said one campaign adviser. "It would have been a total humiliation."

Giuliani appeared without a mask, even after he had been in close contact with campaign adviser Boris Epshteyn, who tested positive for the coronavirus and appeared last week at the RNC with Giuliani and attorney Sidney Powell, maskless.

RNC lawyers were distancing themselves from Giuliani's efforts, the officials said. Much of the White House was empty on Wednesday morning. The campaign has stopped holding morning calls to talk about how to craft messaging around Giuliani's fights, several advisers said.

Many of the president's advisers do not see the effort by Ellis and Giuliani going anywhere, and they believe Trump is only hurting his reputation and legacy by participating in it.

Elsewhere in the country, Arizona Republican Party Chairwoman Kelli Ward continued her push to challenge Biden's victory there ahead of Nov. 30, when Secretary of State Katie Hobbs, a Democrat, is scheduled to certify results.

Ward on Tuesday asked a judge to begin examining ballots and envelopes ahead of what she said would be a formal election contest filed after certification. Arizona law allows any voter to challenge the results of an election on the grounds that illegal votes were cast or that election officials engaged in misconduct. To succeed, Ward would have to show that Trump actually received the most votes in the state, which appears unlikely given that Biden's margin of victory is greater than 10,000 votes.

A judge has set a hearing in the case for Monday.

In Wisconsin, recounts in the two largest counties - Dane and Milwaukee - continued on Wednesday. Election officials plan to pause the process on Thursday to observe the Thanksgiving holiday before returning to work on Friday and working through the weekend to complete the recounts by Dec. 1, as required by Wisconsin law. Biden leads Trump by about 20,000 votes in the state. As of the close of Tuesday, the state's recount, which began on Friday, had resulted in Biden's margin being whittled by just 52 votes.

In Georgia, a machine recount is underway of the state's 5 million presidential votes, at the president's request. While most counties plan on taking Thanksgiving Day off, they are scheduled to resume the recount at 7 a.m. on Friday and work through the weekend to meet the deadline of Dec. 2. The new recount is a machine rescan of the presidential ballots, which were already hand-recounted during the state's risk-limiting audit process to ensure the accuracy of the initial count of ballots.