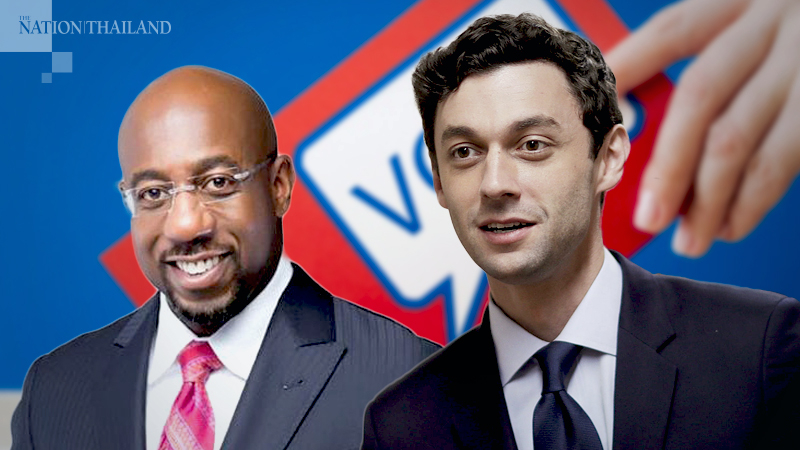 WASHINGTON - President-elect Joe Biden will face pressure to send millions of Americans $2,000 stimulus checks and deliver on an aggressive economic agenda as Democrats closed in on unified control of Washington with likely Senate wins in Georgia.

Democrats whose ambitions have been strangled by a GOP Senate and president for the past two years were eyeing a new world with major opportunities for change on Wednesday - even as the coronavirus rages and the economy teeters on the brink.

Democrat Raphael Warnock won his race against Republican David Perdue in Tuesday's Senate runoff in Georgia, and Democrat Jon Ossoff held a lead over Republican Kelly Loeffler. Winning those races would give Democrats control of the Senate, which along with their House majority and Biden's presidency would give them a stranglehold on power in the nation's capital for the first time since Barack Obama's first term.

It's unclear how quickly the Democratic wins in Georgia might be certified, especially since Republicans could challenge the outcomes. Nevertheless Democrats were celebrating.

"It feels like a brand new day. For the first time in six years, Democrats will operate a majority in the United States Senate - and that will be very good for the American people," said Senate Minority Leader Chuck Schumer, D-N.Y., who would become majority leader if the Democratic wins in Georgia hold.

"America is experiencing one of the greatest crises we have ever faced, and the Senate Democratic majority is committed to delivering the bold change and help Americans need and demand. Senate Democrats know America is hurting - help is on the way," Schumer said.

The first two years of Obama's presidency brought the nation the Affordable Care Act. Biden, then vice president, will now have the opportunity to enact an ambitious agenda of his own. First up could be his promise that winning Georgia would bring $2,000 checks to Americans right away.

"Their election will put an end to the block in Washington - that $2000 stimulus check - that money would go out the door immediately, to help people who are in real trouble," Biden said in Georgia in the closing days of the race. "Think about what it will mean to your lives - putting food on the table, paying rent."

Biden's promise to enact $2,000 checks comes despite a fierce debate among Democratic economists and lawmakers about the merits of the payments, which some critics argue sends too much money to Americans who do not need it. Ossoff and Warnock both pledged while on the campaign trail to enact $2,000 stimulus payments if elected.

"It has been incredible to see the tremendous rush of momentum for $2,000 cash relief," said Andrew Yang, a 2016 Democratic presidential candidate and early supporter of direct cash assistance. "People need help, and we have woken up to the fact that our government can deliver real relief if it chooses to do so."

The $2,000 checks would likely be just the beginning of an ambitious agenda that was already provoking furious debate Wednesday morning as Washington woke to a new realignment of power - presuming Ossoff's victory holds. Democrats may seek to include the stimulus checks in a broader package with other priorities, such as additional funding for state and local governments and a more substantial expansion in federal unemployment benefits.

Infrastructure spending, climate change legislation, expanding health care benefits, student debt forgiveness and more may also be on the table - although congressional aides cautioned that discussions with the Biden team were in the very early stages. With control of both chambers, Democrats can use special budget rules to push through massive legislation with a simple majority in the Senate, instead of the 60 votes usually required for major bills. That's how Republicans enacted their $1.5 trillion tax cut bill in the first year of Trump's presidency with no Democratic votes.

But Democrats' slim majorities will limit their ambitions and likely exacerbate infighting between liberals and centrists about how far to go. Their 222-211 House majority is the smallest margin of control either party has had for years. The Georgia wins would produce a Senate divided 50-50 between the parties, with Vice President-elect Kamala Harris as the tie-breaking vote for Democrats.

"Joe Biden and the entire Democratic Party were incredibly clear of the stakes here, starting with the $2,000 checks and massive economic relief policies that put money and resources in the hands of the people," said Alex Lawson, executive director of Social Security Works, a liberal advocacy group. "They're now going to have to deliver that, starting with the checks on day one."

Renewed signs of economic deterioration will amplify pressure on Democrats to act. Private payrolls shed about 123,000 jobs in December, a startling drop that marked the worst report by the ADP Research Institute in months. The same report showed the number of jobs increasing by more than 300,000 in November. Chris Rupkey, chief financial economist at MUFG, warned in a note to investors that the "dark days of the labor market" from the spring have returned.

"America's great jobs machine ran into a wall of rising coronavirus cases and state lockdowns which puts the entire economic recovery from recession at risk," Rupkey said. "The worst economic downturn since the Great Depression isn't over yet. Bet on it."

Biden will also have to focus on reining in the rampaging coronavirus pandemic, including more money for vaccines and ensuring they go out more quickly.

Congress in March approved more than $2 trillion in emergency economic aid in response to the pandemic and another $900 billion in December. Those aid package have funneled hundreds of billions to small businesses, jobless Americans, and others hurt by the coronavirus pandemic. The first round of stimulus payments included $1,200 per adult, as well as $500 per child, and were within months disbursed to more than 100 million American households.

In late December Trump almost overnight helped generate sizable Republican support for the $2,000 checks even though they stand in stark contrast to long-standing conservative skepticism of government spending and direct cash transfer programs.

The president nearly upended negotiations on economic relief when he ridiculed Congress, as well as his own treasury secretary, for proposing stimulus payments worth $600 per person. Schumer and House Speaker Nancy Pelosi, D-Calif., raced to demonstrate Democratic support for $2,000 payments as well, aiming to show the bipartisan support for the idea.

Senate Majority Leader Mitch McConnell, R-Ky., refused to put legislation for the $2,000 checks on the Senate floor, preventing the measure from advancing. But McConnell was undermined by a coalition of about a half-dozen Republican Senators who said they supported the large payments, including both Georgia Republicans up for reelection and possible 2024 GOP presidential candidates including Sens. Josh Hawley, R-Mo., and Marco Rubio, R-Fla. The bill passed by the House for $2,000 payments was supported by more than two dozen Republicans as well.