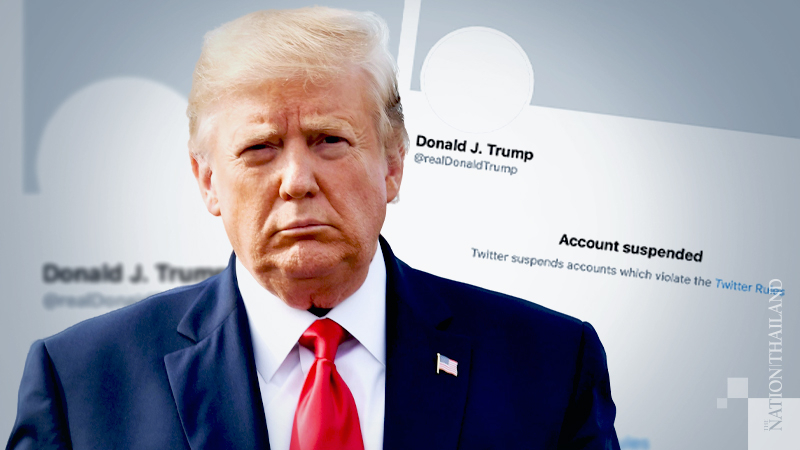 WASHINGTON - Twitter's decision to ban President Donald Trump mere days before the end of his term sparked a fierce political backlash among his most fervent allies on Saturday, sending some of his supporters - and the White House itself - scrambling to find another potent tool to communicate online.

Many prominent conservatives - including Brad Parscale, Trump's former campaign manager, and Rush Limbaugh, the leading voice in right-wing radio - reacted to Trump's suspension by blasting Twitter, quitting the site outright or encouraging the president's loyal following to turn to alternative services. Trump himself signaled he is in negotiations to join other social networks, and he raised the possibility he could create a new online platform on his own.

For now, the White House is considering an early push as soon as Monday against Twitter and other tech giants, blasting it for having silenced the president's ability to reach supporters while calling for fresh regulation against Silicon Valley, according to a person familiar with the matter who spoke on the condition of anonymity. Trump, who is apoplectic about being banned, plans to spend the final days of his term in office railing against the industry, the person said.

Yet Trump's threats also underscore his reliance on the very social-media sites he has long disparaged for perceived political biases. On Twitter, the outgoing president frequently leveraged his more than 88 million followers to savage his rivals, boost allies, and sometimes spread falsehoods on a viral scale.

This vast online reach offered Trump an online megaphone that was unparalleled in American politics. But his rhetoric was also vitriolic - the consequences of which turned deadly after a mob of his supporters seized on his baseless tweets about the 2020 election and stormed the U.S. Capitol this week.

The president and his allies now face a daunting technical and logistical challenge in relocating to a new social network or setting up their own online hub, which is likely to be much smaller than the grand audiences Trump had enjoyed until recently. A shift away from mainstream platforms would mark a retreat to more insular conservative communities and threaten to exacerbate the partisan divisions in a country that Trump already had left on edge.

"For more casual supporters of the president, I think they will receive his messages less frequently," said Emerson Brooking, a resident senior fellow at the Atlantic Council who studies issues including disinformation.

"Obviously, he will have millions of hardcore supporters tuned into broadcast sources still carrying his messages, or [they will] go into whatever online space he occupies . . . but that is going to be a smaller, more devoted group," Brooking said, expressing fears they may become "extremely radicalized."

Trump's removal from Twitter came as part of a broader reckoning late Friday across much of the mainstream web, as tech giants including Apple, Facebook and Google took unprecedented steps to discipline apps, users and accounts seen as instrumental in stoking the violence that left lawmakers under lockdown earlier in the week.

Before it banned Trump, Twitter removed a slew of users affiliated with QAnon, a prominent conspiracy theory. Google-owned YouTube suspended channels associated with Stephen Bannon, Trump's former campaign manager. And Google also removed Parler, a pro-Trump app where users have threatened further violence, from its portal for smartphone software downloads. Apple issued a similar threat to boot Parler from its App Store unless the company improves its content-moderation practices.

The actions reflect a new vigor on the part of Silicon Valley to punish those that have peddled harmful content - from election disinformation to hate speech and violent threats. Congressional lawmakers, digital researchers and human-rights groups praised the moves this week, even as they decried them as too little, too late, coming near the end of Trump's term.

But the bans amounted to a digital massacre in the eyes of Trump's conservative allies, many of whom decried them as censorship.

One of Trump's top allies, Sen. Lindsey Graham (R-S.C.), pledged he is "more determined than ever" to try to terminate legal protections for Facebook, Twitter and other social-media sites, faulting them for censorship. Limbaugh deleted his Twitter account, and fellow talk-radio host Mark Levin also announced he would leave, encouraging users to do the same. The president's son, Donald Trump Jr., posted a widely watched video on Facebook that warned supporters it is only a matter of time until social media companies "inevitably throw us all off the platforms they so heavily censor and regulate only one way." He solicited Trump supporters to sign up for alerts on his website.

"I'll let you know where I end up, my father ends up, where we can direct ourselves so we can keep this going," Trump Jr. said.

On Friday, Trump threatened to decamp to a new social-networking serving almost immediately after Twitter banned him, vowing he would "not be SILENCED!!" -- and promising a "big announcement soon." More than any other social service, the loss of Twitter seemed to strike a personal note: Trump had been obsessed with the platform, he loved to post a tweet and time how long it would take to command attention on television. He often would pull out his phone and say, "Watch this, bing bing bing," recalled senior administration officials.

The White House on Saturday declined to comment on the president's plans or timing.

Already, though, Trump's team has been inundated with requests for him to join their alternate social networks - and his emissaries have entertained conversations with other companies. But Trump has told allies he prefers to launch his own services, according to two aides, who cautioned it may be infeasible and expensive. He also plans to hammer lawmakers in the coming days for failing to repeal Section 230, a provision of federal law that spares tech giants from being held liable for the content posted by their users. Such a repeal could have backfired on Trump, some experts note, resulting in his removal from Twitter sooner.

Parscale, his former campaign manager, encouraged the president on Saturday to strike out on his own. "I believe the best avenue for POTUS is to use his own app to speak to his followers," he said. If Apple or Google block the service, Parscale added, Trump has "a clear path to a victorious lawsuit against them."

Even before the Capitol riot led to his suspension, Trump had weighed turning to other social-media services. In the summer of 2019, aides to Trump at the White House and others on his reelection campaign discussed joining Parler, according to two people familiar with the matter who requested anonymity to describe private conversations. Trump even invited Parler's top executive to the White House as part of a broader social-media summit that summer where he blasted Silicon Valley over unproven allegations that they censor conservatives online.

A locked, private account with the name @realDonaldTrump - the same username the president once had on Twitter - appears to have sat dormant on the site since this June. The president's campaign - under the account Team Trump - also has had an active account on Parler dating back to 2018. On Saturday, the Team Trump account blitzed their roughly 3 million followers with posts that faulted Twitter for having censored the president. Parler did not respond to a request for comment.

Another conservative hub online, Gab, took to Twitter to reveal it had a "big call with someone very special" scheduled on Saturday. The company did not mention Trump or anyone else by name, but later tweeted a story mentioning the president's negotiations with potentially new social services, fueling speculation.

Like other pro-Trump online communities, Gab departs from much of Silicon Valley by eschewing aggressive enforcement against content that its critics see as harmful, dangerous and violent. Asked about Gab's tweet, the company's chief executive, Andrew Torba, responded with an insult and otherwise declined to comment. Gab later tweeted Saturday that "threats of violence have no place" on the site, noting it has "tens of thousands of volunteer users" who monitor it.

Trump would face a daunting task in standing up his own social network. It could be an expensive endeavor that might take years to build. Social-media sites are attractive to users only insofar as they manage to capture a large number of them and their friends. Trump may struggle to incubate such an audience given the overtly political nature of his digital endeavor, some experts said.

"It's very hard to build a new network," said Yochai Benkler, the co-director of the Berkman Klein Center for Internet and Society at Harvard University. "Maybe he's so big and important he could get some millions of people to join a network. The economics will make it much more insular and internal . . . Networks benefit from being an option for people to reach lots of different people."

But Trump's quest to rebuild his online reach - securing himself a prominent voice as he prepares to relinquish the presidency - marks only the latest effort on the part of Republicans to serve as their own information gatekeepers. The party and its allies dominated talk radio starting in the late 1980s, set their sights on cable news in the 90s and in more recent years have stood up a wide array of websites that operate under the banner of conservative news. Social-media, experts said, is simply the next frontier.

"The quote-unquote liberal bias of the media is not simply an assertion, it's a taken-for-granted reality on the right," said Lawrence Rosenthal, the chair of the Center for Right-Wing Studies at the University of California, adding that many conservatives now see the same bias in Silicon Valley. "It is the current incarnation of something that has been taken for granted on the right for decades and decades."