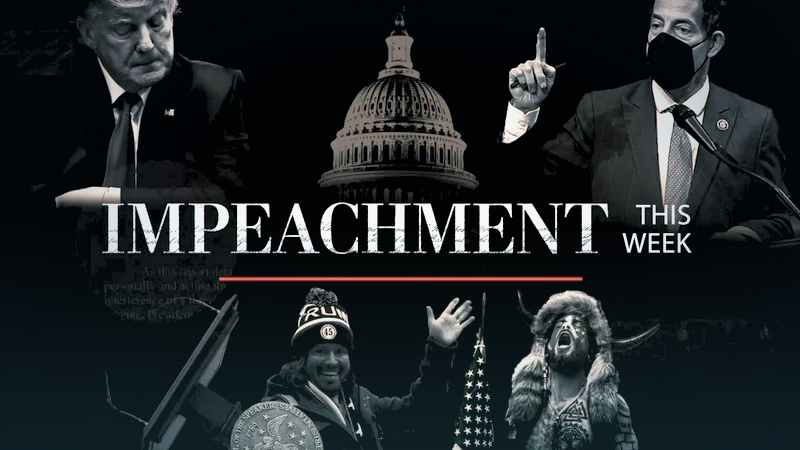 WASHINGTON - President Donald Trump will not be removed from office before President-elect Joe Biden is inaugurated Wednesday.

As the House impeached Trump for a second time last week, Senate Majority Leader Mitch McConnell, R-Ky., sent word that the Senate wouldn't begin an impeachment trial immediately. And as The Washington Post's Seung Min Kim reports, there is a real question about just how quickly it might proceed - especially given the need to confirm members of Biden's Cabinet and to consider Biden's new proposal for a $1.9 trillion coronavirus package.

But what's evident is that we're headed for an impeachment trial not for a president - but for a former president. And there's reason to believe that could change the political calculus for Republicans, even Trump's conviction might remain unlikely. That's because it could provide them cover to do what many of them really want to do, which is to try to rid themselves of Trump moving forward.

Republican pushback on impeachment has often been focused - as was the pushback on he Russia investigation - on the idea that it was an attempt to overturn the 2016 election. That's now off the table. Trump will complete his term. Any punishment will have no bearing on the ability of the man who was elected for four years to serve those four years.

But there is a clear and obvious motivation for Republicans who might not have done so previously to consider convicting Trump, even as it will remain politically difficult.

For weeks after the 2020 election, those around Trump sent word that he might run again in 2024. It was an odd thing to be talking about at a time in which they were saying he had actually won and that evidence would soon be presented to that effect (that evidence is still nonexistent). But at its basest political level, it seemed to send a message to Republican officeholders who might go wobbly that he intended to stick around and that they had better stick up for him.

Most of that was before Trump supporters tried to hijack the seat of American government last week, though. Since then, all of it has been cast in a new light. Even many of those who entertained or fomented Trump's conspiracy theories about the election have gotten a reality check about the true cost of supporting an effort that alleged a stolen election. And even if they don't think Trump's conduct was impeachable or worthy of removal, they have a very good idea of just how things can spiral out of control if he's still around.

A historic number of Trump's fellow Republicans in the House did vote to impeach, even as that historic number only amounted to 10. But others who opposed impeachment faulted Trump, including House Minority Leader Kevin McCarthy, R-Calif.,, and fewer actually spent any time truly defending him. Perhaps most notably, McConnell sent a significant signal that he might vote to convict Trump in the Senate.

To convict Trump in the Senate, there would need to be more GOP votes against him (about 17) than in the House - despite the much smaller chamber. But Senate Republicans have generally expressed more concern about Trump's actions than have their House colleagues. They also, unlike their House colleagues, won't be voting on a president who sits in office at that time.

According to The Washington Post's latest whip count, at least 12 Republicans have suggested they would be open to conviction.

There would be plenty of repercussions involved, but with Trump's removal now off the table, the big political impact would be on his disqualification. This would require a separate vote, but it's extremely difficult to see GOP senators convicting him without taking that extra step. How would you let a guy who you would be saying incited an insurrection - as the impeachment article charges - return to the office from which he allegedly did just that? It would seem a formality at that point. In addition, it might require only a simple majority vote rather than 67, though that's somewhat of an open legal question.

And all the details aside, this could also be the most immediate potential benefit for the GOP. While they've frequently given Trump the fealty he demands over his four years in office, it has generally been a matter of his leverage and their desire to use his presidency to accomplish things. They've now lost that power. The GOP's losses in Trump's reelection bid, combined with the House and the Senate, mark the first time a party has lost all three in four years since 1932. This is reportedly a factor for McConnell, and it could given the party the extra incentive to try to turn the page.

Trump looming over 2024 makes turning that page difficult. Even if he doesn't actually plan to run, he has plenty of incentive to venture in that direction to keep himself relevant and give himself a platform. And a potential nightmare scenario for the GOP - which too few have considered at this point - is if, in light of the relatively mild rebukes he's received from his party and if the party were to flirt with nominating another candidate, he were to go the third-party route. Trump repeatedly threatened to do this in 2016, but it would be potentially catastrophic for the party in 2024, given how much of a base he's built, even if that base were even significantly diminished. (See: Theodore Roosevelt, Bull Moose.)

Thus far, the base is diminished, with a Pew Research Center poll released Friday showing just 60 percent of Republicans approve of him - a marked decline from any previous point in his presidency. But it's still a majority.

The choice ahead for Republicans is whether they feel he should be held accountable for what happened last week, yes. But just as politics have colored their previous decisions about him, so, too, will they color this one. To the extent it's a political calculation, it will be about whether preventing Trump from storming the party again in 2024 will be worth the immediate pain of banishing him from doing so.

That political calculation has been rather simple for the GOP for four years, but it changes once he's out of office. And allowing him to skate on this is extremely fraught for them, as well.