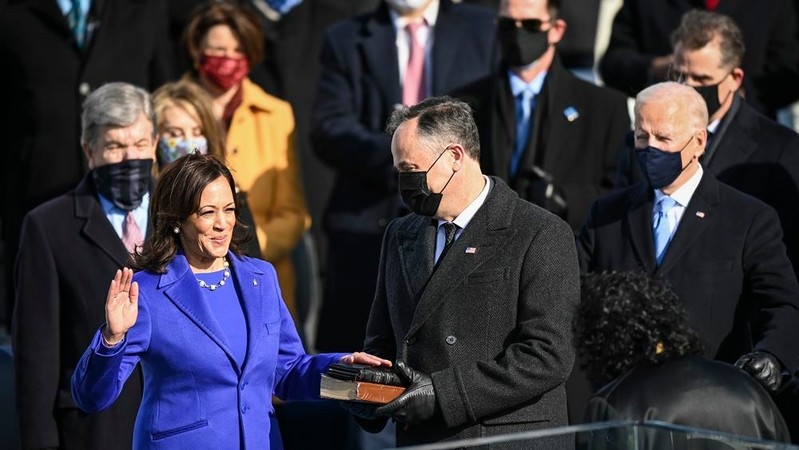 For a moment, everyone on the Zoom call was crying.

The women of color had gathered Thursday to strategize for the first 100 days of Joe Biden's presidency. But Melanie Campbell, president and CEO of the National Coalition on Black Civic Participation, which helped organize the conference, "started my ugly cry" as she spoke of the first female vice president taking the oath of office, and the tears spread from there. Panelists muted microphones, looked away, dabbed their eyes.

But they quickly admonished each other to quell their emotions: Too much focus on the moment might distract from the pressure they needed to exert on President Joe Biden and his administration - including Vice President Kamala Harris.

The important thing, stressed Clayola Brown, president of the A. Philip Randolph Institute, was "not to do what we did with Barack Obama, which is sit back and think now we have it fixed. It's not fixed. Or to sit back and think that the work has been done. It's only started."

Others agreed. "I want us to make sure that (Biden) delivers," said another attendee, Cora Masters Barry, chief executive of the Recreation Wish List Committee, which pushes to create places for youth to play. If the president does not deliver, she warned, "he's going to have hell on his hands."

Days after Harris became the first Black and south Asian woman to win a national election, racial justice activists are trying to balance their elation over having representation at the highest levels of government with a determination to press the administration on racial issues that have festered for decades and spilled protesters into American streets last year.

They say Biden's emphasis on having a diverse administration will not deflect their demand for action on everything from fair policing to economic inequity to environmental justice. Some worry the White House will seek to use Harris's seat at the table to justify delay as it grapples with competing crises - chief among them the pandemic, whose U.S. death toll could reach 500,000 next month.

Symone Sanders, a spokeswoman for the vice president, said Harris's job will not be solely to address issues of racial inequity or listen to the concerns of civil rights groups. Rather, she said, Harris will help Biden tackle the range of crises facing the country, from the pandemic to the economic collapse to climate change.

"The approach the administration is taking to address each of these crises is a whole-of-government approach," Sanders said in an emailed statement. "Racial equity work is a part of every single thing the Biden-Harris administration does. ... The president and vice president have been very intentional when it comes to the racial equity piece, being clear that this is a priority for them."

Campbell said she understands the importance of addressing covid-19 as well as anyone. Several people in her family contracted the disease, including her; at one point her doctors were close to putting her on a ventilator. But she said the pandemic is tied to racial justice, with its outsize effect on people of color, and in any case systemic racism continues to fester elsewhere in society.

"I understand there's covid," Campbell said. "But we've still been fighting because George Floyd was killed, Ahmaud Arbery was killed - and all these things that happened, they are still happening every day. Our justice issues weren't going to go away because of covid."

Campbell and her group have joined others in personally urging Biden to deliver on the racial justice agenda he campaigned on. She was among those advocating for Rep. Marcia Fudge, D-Ohio, the former chair of the Congressional Black Caucus, to receive a cabinet appointment; Biden nominated Fudge to be secretary of housing and urban development.

Still, many considered that a partial victory. Fudge would be the second Black woman to lead HUD in its 40-year history, but some Black leaders wanted Biden instead to put her at the helm of the Agriculture Department, where they say change is more urgently needed.

Campbell was also in a briefing where Biden and Harris discussed their legislative priorities with civil rights activists. Those include the John Lewis Voting Rights Advancement Act, which would restore voter protections weakened by the courts, and the George Floyd Justice in Policing Act, which among other things would make it easier to prosecute police for misconduct.

Civil rights groups are pressing Biden to take action on a range of issues. Criminal justice and policing reform is at the top of many lists, as well as fighting voter suppression. Beyond that, many activists say they want Biden to put resources toward reducing disparities in educational and economic opportunities.

Floyd's killing by Minneapolis police sparked protests across the country and prompted a national reckoning on racism. Floyd family members spoke at the Democratic National Convention, and Black voters favored Biden over Trump by large margins, after resuscitating his primary campaign in South Carolina and propelling him to victories in Super Tuesday states.

That, some civil rights leaders suggested, created an informal pact: Black voters would get Biden to the White House, and in return he would break the frequent pattern in which politicians court African Americans during the campaign but forget them once they've won.

Biden's selection of Harris as a running mate, and his naming of several African Americans to his cabinet, has signaled that minority voices will be elevated in a Biden administration. But it remains to be seen what Harris's role will look like and whether it will be enough for activists focused on racial justice, especially given that it is the president who determines role of his second-in-command.

Harris's ascent, these activists say, is the beginning of real change, not the end. "As much as I participated in the pomp and circumstance (of Inauguration Day), today I am still thinking about what we need to do to keep the pressure on," said Alicia Garza, an activist and organizer who co-founded Black Lives Matter.

"I don't expect that Kamala does, or really should, feel a mandate from Black people to do right by Black people," Garza said. "Black people have to keep that mandate strong and have to apply it across the board."

People with knowledge of the Biden administration, who spoke on the condition of anonymity to discuss internal dynamics, said it's too early to know exactly what Harris's role will be, but that advancing racial equity will not be the job of any one person within the administration.

In most of Harris's events so far, she has flanked Biden, looking on as he signs executive orders and joining him for the President's Daily Brief on national security matters. On Friday, Harris met with business leaders hurt by the coronavirus pandemic, stressing the need to pass Biden's pandemic relief bill.

Harris could be deployed to lobby her former colleagues in the Senate, said a Biden aide who spoke on the condition of anonymity to discuss internal deliberations. Biden served in the Senate from 1973 to 2009 and has connections with longer-serving Senators, while Harris was elected in 2016 so she has fresher connections with younger members.

As the president of the Senate, Harris will break any tie votes in the chamber, and since it is split 50-50 between the parties, she is likely to exercise that role more than most of her predecessors.

Sanders said that during her first days on the job, Harris previewed Biden's American Rescue Plan for mayors of both parties, spoke to labor leaders and addressed small business representatives.

As Harris emerged as a front-runner to be Biden's running mate over the summer, she met with numerous activists, including some who were suspicious of her previous role as a prosecutor. Among other meetings, Harris spent more than an hour with Garza, who said she now has the vice president's cellphone number.

Garza said supporting Harris does not have to be at odds with keeping her accountable. "On my mind is, how do we strengthen her to be the best advocate that she can possibly be," Garza said. "And in the case where she fails to meet expectations, how does she come to realize, right, that that's not acceptable?"

Rashad Robinson, president of Color of Change, a civil rights advocacy organization founded in the wake of Hurricane Katrina, said he has been working with the Biden administration.

Along with other activists, he met with Biden's nominee for Treasury Secretary, Janet Yellen. Last summer Robinson spoke extensively with Harris, who has appeared on his podcast. Robinson said he's waiting to see if those conversations yield significant action and if he will continue to be consulted, adding, "We're not just looking to be brought in at the end of something, to cheer."

"I think that there are going to be signs along the way that will tell us if racial justice is showing up in more places than just speeches," Robinson added. A central question, he said, is whether the administration will allocate significant resources for racial justice initiatives.

"It's one thing to say you're for racial justice - and not showing up in terms of what budget you request from Congress," Robinson said, citing the Departments of Justice, Agriculture, Transportation, and Housing and Urban Development, as critical agencies.

Robinson said he has already had more interaction with Biden than with his predecessor, which is a positive step. He was careful to note that the administration is moving in the right direction - for now.

"I want to acknowledge the weight of everything that's been taken on," Robinson said, "and be clear that when we do have something to say - when we are in a position where we are raising our voices, pushing back - (they) will know that I didn't start off that way."