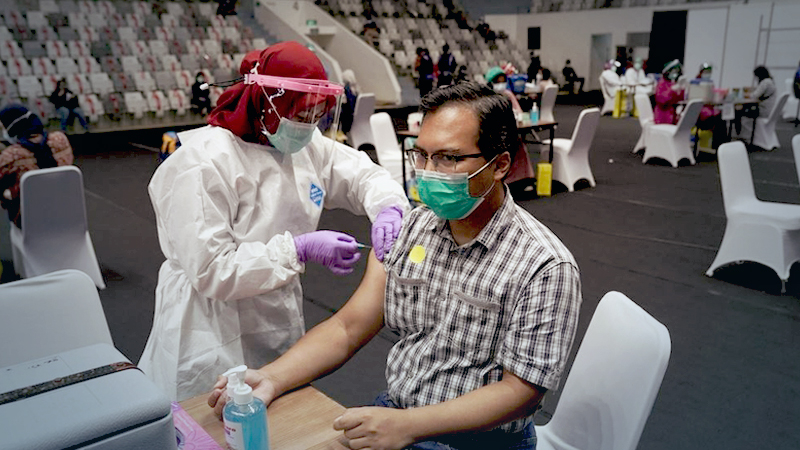 The $9.2 trillion price tag for failing to vaccinate world

The global economy's recovery risks being dampened or even derailed by the lag in coronavirus vaccinations for poorer nations relative to their wealthier peers.

Bloomberg's Vaccine Tracker shows 4.54 million doses were given on average across the world each day over the last week, but it's far from an even spread. The U.S. and U.K. make up about 40% of the 119.8 million doses administered globally.

Developing and emerging markets are, by and large, doing far less well. In Africa, only Egypt, Morocco, Seychelles and Guinea are recorded as having given any of the vaccines at all. Much of Central Asia and Central America has yet to begin vaccinating, or is moving slowly.

That means emerging economies risk falling further behind economically and limits room for rebound even in fully-inoculated countries by depriving them of demand for their goods and a supply of manufacturing parts. Worse still, not combating covid-19 everywhere may mean harder-to-contain mutations of the virus generate fresh health and economic crises.

"With the virus mutating, no country is safe until the whole world is inoculated and achieves herd immunity," said Chua Hak Bin, senior economist at Maybank Kim Eng Research in Singapore.

A recent study commissioned by the International Chamber of Commerce concluded an unequal allocation of injections could deprive the world economy of as much as $9.2 trillion.

Such calculations put rich nations under intensifying pressure to share their vaccine stocks, even though their publics may not support such generosity. Yet the signs point to ongoing hoarding.

European countries are already at odds over access to vaccines, just as they were over personal protective equipment a year ago. A program aimed at enabling access to vaccines is being underfunded by the biggest economies.

In China, which has paced the global economic recovery after getting the virus under control, a lack of urgency means it is now lagging the West in its rollout of vaccines, according to analysis by Gavekal Dragonomics.

Some developing economies worldwide might see some relief soon through the World Health Organization's Covax initiative, which will send 97.2 million vaccine doses to India in its first tranche of distribution, even as current supply in the country is seen outpacing demand. Pakistan is due to receive 17.2 million shots from the program, with Nigeria getting 16 million.

Rand estimated that so-called vaccine nationalization could end up costing high-income countries $119 billion per year versus a $25 billion price tag for supplying low-income countries with vaccines. The U.S. and Germany would face the biggest hit in absolute terms from the lack of a global inoculation, according to a December report.

Meantime, the study sponsored by the International Chamber of Commerce and written by academics from Koc University and the University of Maryland reckoned 49% of the economic cost of a lingering worldwide pandemic would be borne by advanced economies even if they enjoy total vaccination.

Almost half of respondents in a survey of executives by Oxford Economics see activity in their business remaining below pre-pandemic levels throughout 2021. More than four in five respondents flagged repeated pandemic waves as a significant or very significant risk over the medium term.

Emerging and developing economies are vulnerable to richer countries hoarding their doses because their fragile health systems are straining under the weight of mounting infections, they lack the resources to generate and distribute vaccines as fast as their wealthier peers, and foreign investment is flowing to safer locations.

Take Indonesia. It's the world's fourth-largest economy and home to 274 million people, yet covid-19 cases and deaths have accelerated at record paces. Almost half a million people received a first dose of the vaccine by end-January, falling short of a government goal of 598,400 that month. The nation is currently one of the least-vaccinated populations across 66 nations, at 0.30 doses per 100 people as of Feb. 5, according to Bloomberg's Vaccine Tracker.

The Peterson Institute for International Economics spelled out the dilemma posed by so-called vaccine nationalization bluntly in a report published this week titled: "The pandemic is not under control anywhere unless it is controlled everywhere."

"If you have public health out of control somewhere, it's not just a local economic problem, it's a global economic problem," said Monica de Bolle, a senior fellow at Peterson and one of the report's authors. "But, unfortunately, I'm not sure anyone is gearing up to actually do anything about it."