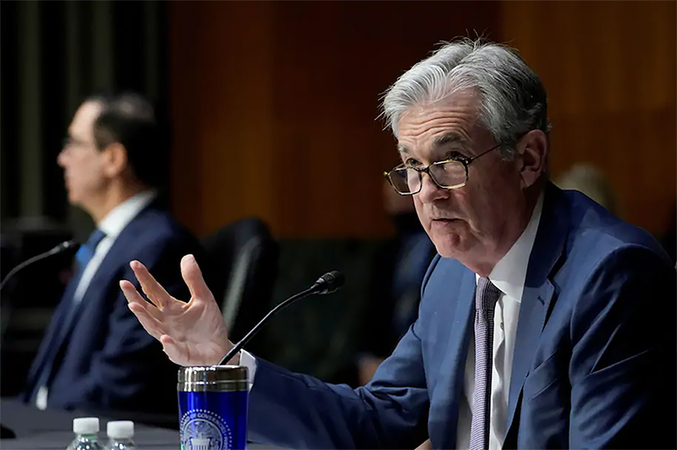 Federal Reserve Chair Jerome Powell said Wednesday that the real unemployment rate in January was "close to 10 percent," significantly higher than the 6.3% rate reported by the Department of Labor last week.

The discrepancy is due to the "misclassification" of some jobless Americans, Powell said during a virtual speech at the Economic Club of New York. After accounting for people who have left the labor force since February 2020, the unemployment rate is much higher than the official figure, he said.

"Correcting this misclassification and counting those who have left the labor force since last February as unemployed would boost the unemployment rate to close to 10 percent in January," Powell said Wednesday.

The higher figure is another reflection of how the pandemic continues to constrain the labor market. The U.S. gained back a paltry 49,000 jobs in January. In December, the country lost 227,000 jobs.

The latest figures come as Congress debates President Joe Biden's $1.9 trillion coronavirus package, which would extend unemployment benefits, issue $1,400 in direct checks and set aside hundreds of billions of dollars to fight the pandemic.

Powell has repeatedly said that the economy's future depends on controlling the virus. As the number of cases rose through the holiday season, the labor market's recovery slowed. And for many service-sectors workers, jobs that depend on person-to-person contact have yet to return.

"Federal Reserve Chair Powell's assessment of joblessness in America is bleak," Wyden said in a statement.

Powell noted that nearly 5 million people said the pandemic prevented them from looking for work in January. Some parents are providing full-time child care or been forced to stay home with children during virtual schooling. Others have been deterred by fear of the virus, especially in jobs that at restaurants, hotels and entertainment venues.

"We are still very far from a strong labor market whose benefits are broadly shared," Powell said.

Powell has also spoken about the discrepancy before. After the official unemployment rate fell to 7.9% in September, Powell said that a broader, more accurate measure that adjusts for "mistaken characterizations of job status, and for the decline in labor force participation since February" would put that month's rate at around 11%.

Powell has repeatedly urged lawmakers to keep relief flowing, especially for the 10 million Americans whose jobs have not returned since the pandemic began. The Fed, in turn, has no plans to raise interest rates until the labor market heals substantially.

As congressional Democrats rush to pass Biden's coronavirus package, some economists worry the full thrust of the bill could be too much for the economy to handle. Some economists have questioned whether the $1.9 trillion stimulus, combined with pent-up savings that Americans are expected to unleash once the pandemic ends could suddenly overheat the economy, triggering a rise in inflation and forcing the Fed to respond by raising interest rates.

Powell dismissed those concerns. Inflation has been low or stable for decades, and the Fed is prepared to tolerate a temporary rise inflation over its' 2% target, he said.

It's possible, Powell said, that aid from Congress plus a spike in consumer spending could cause "some upward pressure on prices."

But "my expectation is that will be neither large nor sustained," he said.