'Dearest Sweetheart': The passion and poignancy of wartime love letters

"Darling, I hope you like this rather weird pose. This was the surprise I had for you and I do hope you like it. I love to keep you well supplied with pictures, so you won't ever have a chance to forget me ... so this photo is from me ... Lots of love and millions of kisses, Pat."

Those are the words Patricia Brim, 20, wrote to her husband, Raymond, on Valentine's Day 1944, with a photo of her "rather weird pose" attached. Raymond was in the Army Air Corps, fighting the Nazis in Europe on dangerous bombing runs. A little more than a year earlier, he had gone AWOL from his air base in Wyoming for 48 hours so he could quickly marry Patricia in Utah before being sent overseas.

"My dad said a hundred times, a thousand times: 'I swore to myself I would come home to Pat,'" said their daughter Celia Straus on Saturday.

He did. Now, 77 years later, Straus, who lives in Washington, D.C., is handing her mother's love letters over to a longtime acquaintance, historian Andrew Carroll.

"These are really rare," Carroll told The Washington Post. "Back then it was mostly men writing home to their wives, so they (the wives) could keep the letters. But if the wives wrote the husbands, they (the husbands) couldn't in many cases hold onto them." 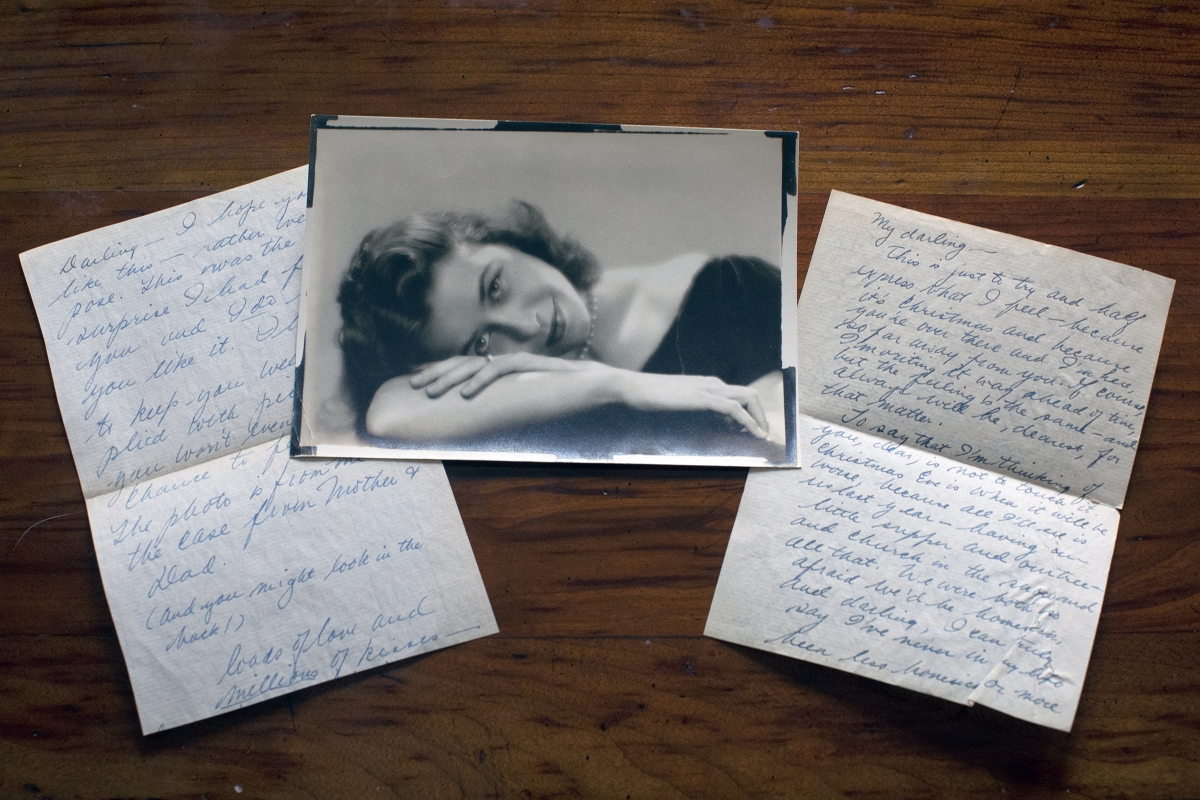 Carroll knows this better than anyone; he has been collecting war letters since his sophomore year of college in 1989. His family home in D.C.'s Georgetown neighborhood burned down that year. He was upset over the loss of family memorabilia, so, perhaps to console him, an older cousin showed him a letter the cousin had sent his wife during World War II.

When Carroll tried to return the letter, the cousin told him, "Keep it. I probably would have thrown it away anyway."

"And that was the spark," Carroll said.

Since then, Carroll has collected more than 100,000 war letters. He has letters from American conflicts from the Revolutionary War through the wars in Iraq and Afghanistan (which now come in email form). He has often picked up old letters in person, earning him the nickname "the historian who makes house calls."

There was a book compilation of the letters, a PBS documentary, and a play that made it to the Kennedy Center. The latest iteration is a podcast, called "Behind the Lines," with journalist Barbara Harrison.

Other than descriptions of combat, the most common subject of the letters is love.

There are tragic ones. During World War II, a woman named Gene Sobolewski, who was in the Women's Army Auxiliary Corps, sent a letter to her fiance on the front lines:

I didn't write to you last night, Honey, but I guess you won't miss one letter. You get my mail in bunches anyhow. Besides, I always write about the same subject, hundreds and thousands of books were written about it also. I'm talking about 'love.'"

Months later, the letter was returned to her unopened with red letters on the envelope: "Deceased."

"It's heartbreaking," Carroll said. "Because they weren't married, she was not officially notified. His parents got the official notification, so this was how she found out the love of her life was gone forever."

Sobolewski eventually married another service member and had children, but she kept the unanswered letter her entire life. Her daughter donated it to Carroll.

There are happy stories, too. Nathan Hoffman had gone on only five dates with Evelyn Giniger in New York City before he was shipped overseas during World War II. They wrote each other every day, and because of Hoffman's assignment as an Army clerk, he was able to keep her letters. When he returned to his hometown of Waco, Texas, 16 months later, she was there waiting for him. They married soon afterward.

They were still happily married in 1999 when they donated their complete collection - more than 2,000 letters, Carroll said. Months later, director Steven Spielberg contacted Carroll. Spielberg said was directing a special millennium celebration show for CBS and hoped to have an elderly couple read their World War II letters onstage; might Carroll know anyone who fit the bill?

That was how the Hoffmans found themselves on the steps of the Lincoln Memorial on New Year's Eve, surrounded by celebrities and in front of President Bill Clinton, reading their sweet nothings aloud.

"My dearest Evelyn, in leaving I have only one regret - that I was unable to see you just one last time. There was so much that we didn't get around to talking about, a great deal that I'm sure each of us would have said that now will have to wait . . ."

"My dear, every day I miss you a little bit more. And today, I miss you like tomorrow. The knowledge that you're getting closer to the front makes me tremble every time I think of it. I wonder how you must feel. All I can do is pray and keep a hopeful heart ..." 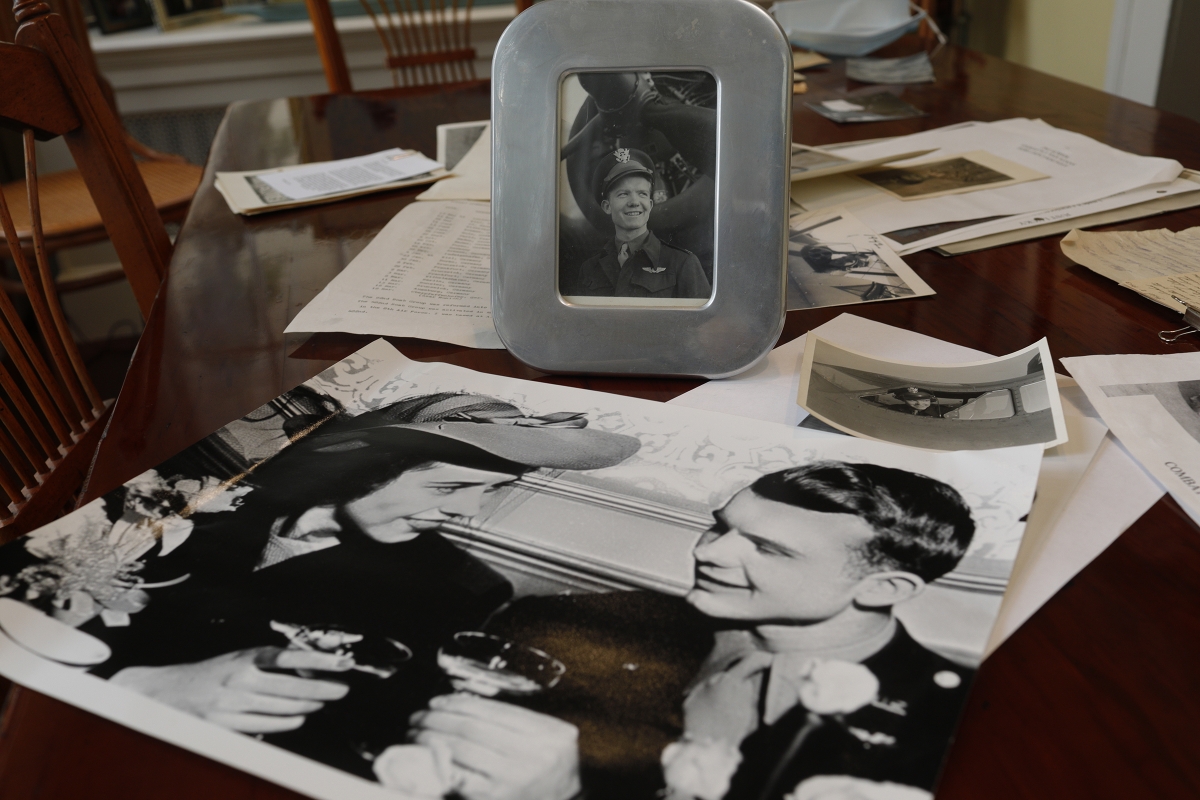 Carroll has acquired letters from gay and lesbian service members, but none of them are love letters - an empty space he very much hopes to fill. He is still haunted by a radio interview he did 15 years ago, when a man called in and said he and his boyfriend used to send each other love letters in code during the Vietnam War. Carroll told the man he would be honored to have the letters; the man said he would consider it, but Carroll never heard from him again.

He has tried, without success so far, to contact Secretary of Transportation Pete Buttigieg, about a letter he spoke of on the campaign trail. Buttigieg described writing a "just in case" letter to his parents in 2014 before leaving for Afghanistan. He vowed to come out of the closet if he returned home safely.

"It's funny to think that I wrote that trying to project a sense that I didn't have any resentment over missing out on things, when what I was missing out on then was now the most important thing in my life," Buttigieg told USA Today in 2019. He met his husband, Chasten, after returning from Afghanistan in 2015.

For a time, Carroll rented the apartment next door to his own just to store the letters. In 2013, he donated the collection to Chapman University in California, and it became the Center for American War Letters, where they will be preserved and digitized.

He was still making house calls on the center's behalf when the pandemic hit. Though the work has been put on hold for nearly a year, the center is still accepting submissions. "We've actually seen a huge uptick in donations throughout the pandemic, and it's because people are trapped in their homes," Carroll said.

Straus, who works with veterans experiencing PTSD and traumatic brain injury, has known about Carroll and his letter-collecting mission for years; they have worked together on veteran support projects. Her parents were happily married for 65 years until her mother's death in 2007. Her father died in 2019, and she inherited the old manila folder stuffed full of letters. Reading them is inspiring, she said, because the immediacy "makes me grasp the bravery of these kids."

Straus has received the coronavirus vaccine, and Carroll followed strict guidelines so he could safely meet with her Saturday and accept the letters.

"I hope their story inspires others to save their letters from relatives who served, because they are so important to our country," she said. "Particularly right now."

So, in honor of Valentine's Day, here is a transcript of one her mother's letters, written for a different holiday, Christmas 1943:

This is just to try and half express what I feel - because it's Christmas and because you're over there and I'm here so far away from you. Of course, I'm writing it way ahead of time but the feeling is the same and always will be, dearest, for that matter.

To say that I am thinking of you, dear, is not to touch it. Christmas Eve is when it will be the worst, because all I'll see is us last year - having our little supper and our tree - and church in the snow and all that. We were afraid we'd be homesick and darling, I can truly say I've never in my life been less homesick or more happy. It was all heaven, every moment with you - loving you as I do, and knowing that I have a husband who is so wonderful and sweet and tender and loves me so terribly.

Darling, I've missed you terribly since you went away, but it's nothing to how I'll feel when you read this. I've tried to send a few things to help make it a better Christmas but perhaps I can promise that next year, when we're together, we'll have our love and happiness and the most perfect Christmas in the world. Ray, my dearest darling, I love you. I love you with all my heart and body and soul. Nothing can ever change it. And so, darling, a Merry Christmas and God keep you always,

Over 4.2 million doses of Sinopharm reserved in 3 days

Prayut to check if Phuket ready to reopen on July 1

Over 4.2 million doses of Sinopharm reserved in 3 days