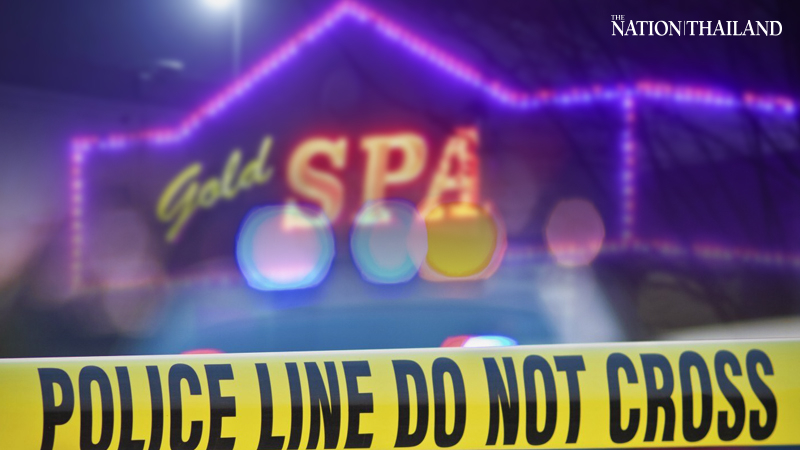 Shootings at three Atlanta-area massage parlors that unfolded within an hour on Tuesday left eight people dead, and authorities said a 21-year-old man in at least one incident has been arrested.

Atlanta police said they found four women - who all appeared to be Asian - dead inside two massage parlors across the street from each other. Another four people, including two Asian women, were killed and one more injured at an Asian massage parlor in nearby Cherokee County, Sheriff's officials said.

Authorities said they do not know yet whether the killings were racially motivated, but the shootings raised concerns among advocacy groups, who have called attention to a string of high-profile attacks on people of Asian descent.

Cherokee County Sheriff's Capt. Jay Baker said Robert Aaron Long, a resident of the county, was taken into custody south of Atlanta in Crisp County. Atlanta police said that based on video evidence, Long is the likely suspect in the shootings at all three massage parlors, although they are still working to confirm the connection.

Baker said at a news conference that investigators are working to determine a motive and that "nothing's going to be ruled out." The FBI is working on the case with local authorities, officials said.

Those fatally shot in Cherokee County were two Asian women, a White woman and a White man. A Hispanic man was taken to the hospital with injuries, he said.

While the motive remained unclear, the violence stoked fears in a community already reeling from attacks and racist targeting.

"Right now there is a great deal of fear and pain in the Asian American community that must be addressed," tweeted the group Stop AAPI Hate, which tracks attacks on Asian Americans and Pacific Islanders.

The New York Police Department's counterterrorism unit tweeted that it was "monitoring the shooting of Asian Americans in Georgia" and that it would deploy "to our great Asian communities across the city out of an abundance of caution."

Baker said five victims were shot inside Young's Asian Massage Parlor along Highway 92, about a half-hour's drive north of Atlanta. Less than an hour later, at about 5:47 p.m., officers responded to a "business robbery in progress" in northeast Atlanta at Gold Massage Spa, said Sgt. John Chafee of the Atlanta Police Department. They found three women dead inside, apparently from gunshot wounds, he said.

Police were still on the scene when shots were reportedly fired from across the street at Aromatherapy Spa, according to Chafee. Officers found one woman inside that business who was also apparently fatally shot, he said.

"Our entire family is praying for the victims of these horrific acts of violence," tweeted Georgia Republican Gov. Brian Kemp, who praised the "quick apprehension of a suspect."

Authorities posted photos of a dark-colored vehicle soon after the shootings, and the Crisp County Sheriff's Office said it heard at about 8 p.m. that a murder suspect was headed their way. State patrol troopers and Crisp County deputies made contact with a 2007 black Hyundai Tucson about a half-hour later on the highway, the sheriff's office said.

A state trooper performed a maneuver that caused the car to "spin out of control," Crisp County Sheriff Billy Hancock said. Long was taken to jail "without incident," Hancock said, and his office forwarded its information to the Cherokee Sheriff's Office and the FBI.

Chafee said police and Cherokee County officials were in contact, and Atlanta officers have been dispatched to other massage parlors in the area as a precaution.

Bryant, the Atlanta police chief, said the department has located witnesses who were in and near the spas, and no one else at either location was reported wounded.

Lisa Copeland, the manager of an AutoZone Auto Parts a few stores down from Young's Asian Massage, said she almost went into the smoke shop next door to the salon at the time of the shooting. But at the last minute, she decided against it.

As she sat in her car later, she noticed police vehicles and ambulances arriving at the salon. "It was complete chaos," she said. "I was racking my brain to ask, 'Did I see that car drive down there?'"

Jacob Kimmons, an employee at AutoZone, said this kind of violence rarely happens in their neighborhood.

"You never see it in a decent area like this. Just to see something like that happen is crazy," he said. "I just thank the good lord he didn't come over here and do anything."