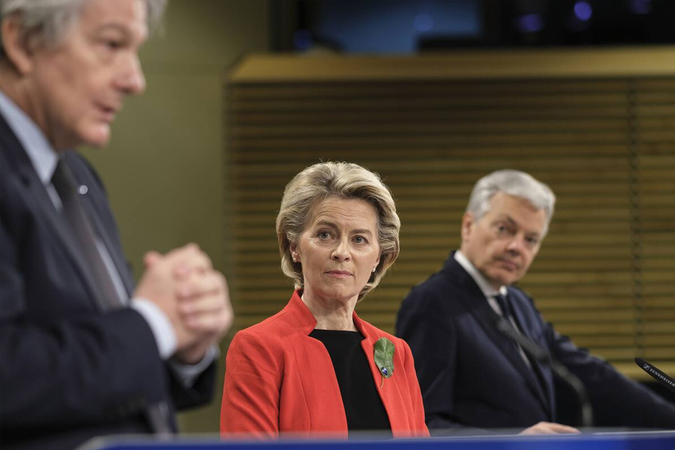 BERLIN - The European Union on Wednesday launched a closely watched effort to create a joint vaccination passport for its more than 440 million citizens and residents, embarking on a tightrope walk between economic pressures, discrimination fears and concerns over Europe's slow vaccination progress.

Supporters hope the "digital green certificates" will be ready by June, which could help to salvage the European summer tourism season and even serve as a model that could be extended to the United States and other countries. But E.U. countries lag far behind the United States in vaccinations, which has raised concerns that the passport plan could be launched prematurely.

The passes are expected to be digital or paper documents for travelers to prove that they have been vaccinated, that they recovered from the virus or recently tested negative for it. In many cases, this could free travelers from quarantine obligations.

Those privileges could eventually also apply to Americans or British citizens traveling to continental Europe, given that all vaccines approved in the two countries are also approved for use in the European Union. Greece, Cyprus and several other E.U. countries have already announced or are working on plans to welcome British travelers back within months. But E.U. borders will remain closed to most Americans - even those who are vaccinated - until the bloc lifts its travel restrictions.

An easing of those restrictions remains unlikely in the short run, amid persistent E.U. concerns over new coronavirus variants. President Joe Biden also reimposed an entry ban on most European travelers in January, which could become another obstacle, as E.U. officials have cited reciprocity as a factor in their decision-making on travel restrictions.

The European passport initiative appears in some ways modeled on passes already in use in Israel, where QR codes allow fully vaccinated people access to gyms or restaurants.

But the plans unveiled Wednesday leave many of the most controversial points up to member states, including the question for which activities the passes would become mandatory.

Whereas Austrian Chancellor Sebastian Kurz recently said that the "vaccinated should have full freedom," indicating support for an approach similar to the one in place in Israel, some E.U. leaders still see the vaccine certificates mostly as a way to resume European travel.

With many Europeans unvaccinated and some receiving products that aren't yet approved by the E.U. medical regulator, concerns over unequal treatment have mounted. E.U. member Hungary, for instance, has vaccinated some of its citizens with Russia's Sputnik V and Chinese vaccines that are not currently recommended for use by the E.U. medical regulator. Under the E.U. proposal, it would be up to member states to decide if they accept those vaccines as sufficient proof of immunity.

"Beyond being a distraction from the task of vaccination, the pass could end up creating a two-tier society," Israel Butler of the Civil Liberties Union for Europe, a human rights watchdog, said in a response Wednesday.

The vaccination passport plans follow months of lobbying from tourism-dependent European top destinations such as Greece and Spain, which see the passes as an opportunity to revive their tourism sectors. About 20 percent of Greece's gross domestic product depends on tourism, for example.

But Europe's two most populous countries - France and Germany - have approached the plans with more caution, which could still derail them as they require the approval of the European Parliament and of member states.

German Chancellor Angela Merkel recently said that preferential treatment of vaccinated travelers "isn't on the agenda, given the low vaccination coverage at this point."

There is also still no scientific consensus on the extent to which vaccinations prevent the transmission of the virus.

The German and French stalling has frustrated officials in many southern European countries. Greece, Cyprus and other nations recently announced plans to set up bilateral agreements unless an E.U.-wide solution can be found.