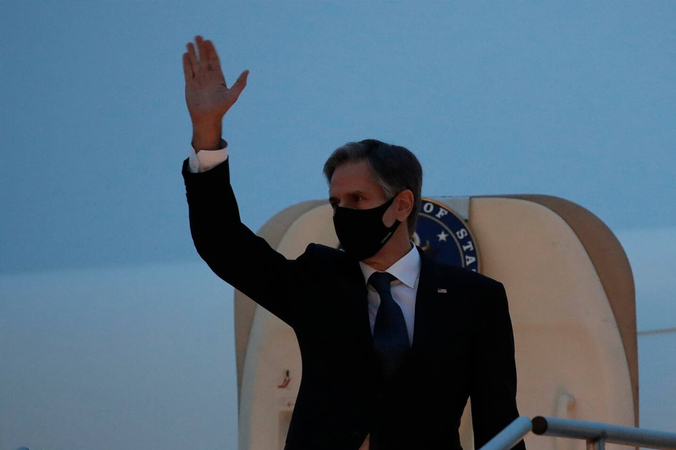 WASHINGTON - The Biden administration's first faceoff with China began in Alaska on Thursday with a testy exchange between Secretary of State Antony Blinken, who chided Beijing for "cyberattacks on the United States" and "economic coercion toward our allies," and China's top diplomat, Yang Jiechi, who detailed America's own human rights problems, citing recent Black Lives Matter protests.

Wang criticized new U.S. sanctions against Chinese officials for actions in Hong Kong, saying, "This is not supposed to be the way one should welcome his guests."

After Wang ended his comments, government handlers began to usher the media out of the conference room, but Blinken waved at them to stay as the top U.S. diplomat added that the United States "is not perfect," but throughout history it has dealt with its challenges openly. When the media was again ushered out, Yang told reporters to "wait" and raised a finger at the U.S. side, accusing Blinken of speaking in a condescending tone.

The ad hoc remarks and tense back-and-forth marked a sharp break from the heavily choreographed diplomatic engagements that usually occur between U.S. and Chinese officials. But this first meeting had long shown signs of breaking the ordinary mold.

No agreements and no joint statements are expected to result from the meetings in snow-covered Anchorage, U.S. officials said, as the Biden administration hangs onto some of the hard-line China policies implemented under President Donald Trump.

"We do not seek conflict," Sulivan told his Chinese counterparts at the top of the meeting, "but we welcome stiff competition."

The four top officials are scheduled to meet three times over the next two days in conversations that "will be pretty tough," a senior administration official told reporters as temperatures dipped to 14 degrees outside Anchorage's Hotel Captain Cook, the venue for the conversations.

Blinken set the stage for a confrontational encounter in remarks in South Korea before boarding a plane for Anchorage.

"We are clear-eyed about Beijing's consistent failure to uphold its commitments, and we spoke about how Beijing's aggressive and authoritarian behavior are challenging the stability, security and prosperity of the Indo-Pacific region," he said.

"There's no room for China to compromise on issues related to sovereign security and core interests, and its determination and will to safeguard its core interests is unwavering," Chinese Foreign Ministry spokesman Zhao Lijian said.

Dispensing with the pomp and circumstance associated with official visits, the four officials are set to hold formal business meetings instead of stately affairs that entail banquets and cultural events. U.S. officials in Alaska said they wanted to avoid a simple recitation of talking points and create space for the two sides to discuss issues and ask each other questions.

"This will be a frank conversation in calling out Beijing's actions," State Department deputy spokeswoman Jalina Porter said.

Blinken arrived in Alaska after visits to U.S. treaty allies in Japan and South Korea, where he was joined by Defense Secretary Lloyd Austin. During his stop in Tokyo, the two governments issued a joint statement criticizing China's treatment of Uyghur Muslims in western Xinjiang province and coercive and "destabilizing behavior" toward its neighboring countries.

"We will push back if necessary when China uses coercion or aggression to get its way," Blinken said in Japan.

China's official media organs initially sounded a positive note when the Anchorage meetings were announced, with an editorial in China Daily calling it a "welcome development, reviving hopes that the two countries will be able to demonstrate the wisdom and resolve to navigate ties away from conflict and confrontation."

But as U.S. officials downplayed the meeting, calling it a "one-off" that entails no intention of "follow-on engagements," Chinese messaging dimmed in response, with the Chinese ambassador to the United States, Cui Tiankai, saying, "We don't hold overly high hopes."

The challenge for U.S. officials will be in balancing what Blinken has called a "complex relationship" that has significant stakes for combating the coronavirus pandemic and climate change given Beijing's status as the world's largest emitter of greenhouse gases.

Blinken had made clear he would open the discussions from a tone of confrontation.

"Among the factors that drive the administration's messaging is not wanting to expose a flank and invite criticism of being appeasing to Beijing," said Danny Russel, a vice president at the Asia Society Policy Institute and a former career diplomat. "They are disabusing people of the expectation that this is going to produce some solutions or even negotiations. But it's an opportunity to lay our priorities and level-set."

U.S. officials told reporters ahead of the trip that Blinken and Sullivan would emphasize U.S. concerns over China's "increasingly aggressive activities across the Taiwan Strait" and other issues China considers internal matters, such as its treatment of Uyghur Muslims and control over Taiwan. "We will absolutely make those points very clear," said an official, who like others spoke on the condition of anonymity to discuss the sensitive discussions.

China, in turn, has indicated that it wants the Biden administration to reverse sanctions imposed by the Trump administration, including limitations on U.S. technology sales to Chinese telecommunications companies and chipmakers.

Given the wide gulf between the two countries, the chances of a breakthrough are limited, but they will have the benefit of very few distractions.

"When you're in Anchorage, there are not Congress people around and there are a finite number of reporters," Russel said. "You're basically sequestered."