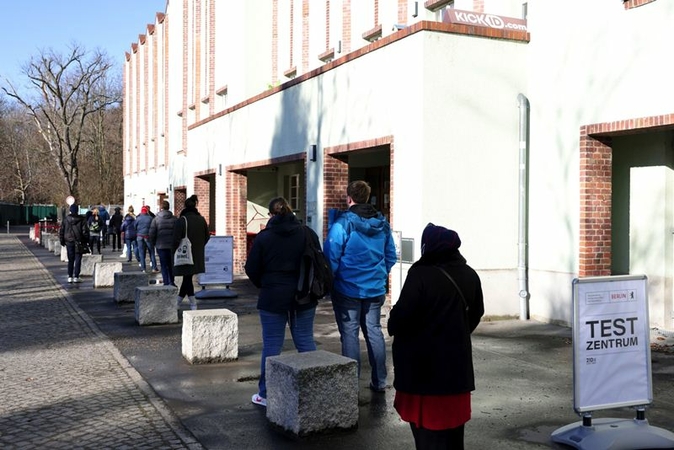 Germany is considering an extension of lockdown restrictions into April and the introduction of new rules for those returning from abroad after covid-19 infections rose beyond a key level that may prompt action by authorities to prevent the health system becoming overrun.

Draft plans, seen by Bloomberg, include mandatory quarantine and coronavirus tests for all people returning from a trip to another country, independently of infection rates at their travel destination. They will be discussed by Chancellor Angela Merkel and regional leaders when they meet on Monday.

The national seven-day rate of cases per 100,000 people has risen to 103.9, German health agency Robert Koch Institute said on its website Sunday, taking the rate to the highest since Jan. 26. Separate data from Johns Hopkins University showed cases in the country increased by 24,034 in the 24 hours to Sunday, compared with 10,568 recorded a week earlier.

Cases in Germany are rising again after authorities began to relax restrictions in late February and set out a plan to gradually unwind curbs. That plan depends on the infection trend, heightening the stakes for Monday's talks.

Germany uses the incidence rate as a gauge of covid-19's spread. If it exceeds 100 for three days in a row, an "emergency brake" provision allows authorities to tighten lockdown measures again. That threshold had been crossed in 9 out of 16 federal states as of Sunday, prompting some state leaders to call for uniform nationwide measures for virus hotspots.

"We have an instrument that works: the emergency brake. It must be applied consistently everywhere in Germany," Bavarian Prime Minister Markus Soeder told the Frankfurter Allgemeine Sonntagszeitung in an interview. "Otherwise it will become a toothless tiger."

Regional leaders expressed diverging views on what to do ahead of the upcoming Easter holiday when asked by the Welt am Sonntag newspaper. Reiner Haseloff, prime minister of Saxony-Anhalt (incidence rate: 115.1), said people should be able to vacation within the confines of their own region. But Bodo Ramelow, president of Thuringia (incidence rate: 207.7), pleaded with the population not to go on vacation at all.

"Whoever believes that you can open up entire holidaying regions without testing in the current phase of the pandemic doesn't know what's going on," Ramelow told the newspaper.

Merkel's Christian Democratic Union suffered a rout in two regional elections this month. The stuttering pace of the vaccine rollout, irritation with lockdown restrictions in place since late last year and a widening scandal over claims that some conservative lawmakers profited from the pandemic have all taken a toll on her popularity.

Still, Merkel was clear last Friday about the threat to the system posed by the virus resurgence. "We are seeing exponential growth" in cases, Merkel said Friday. "We will unfortunately have to make use of the emergency brake."

On Sunday, Merkel's chief of staff Helge Braun tweeted that the draft paper circulating didn't stem from the chancellery, as first reported by Bild newspaper.

The resolution calls for companies in Germany to offer their employees two rapid covid-19 tests per week and states that the federal government will "enact the relevant regulations by the end of March."