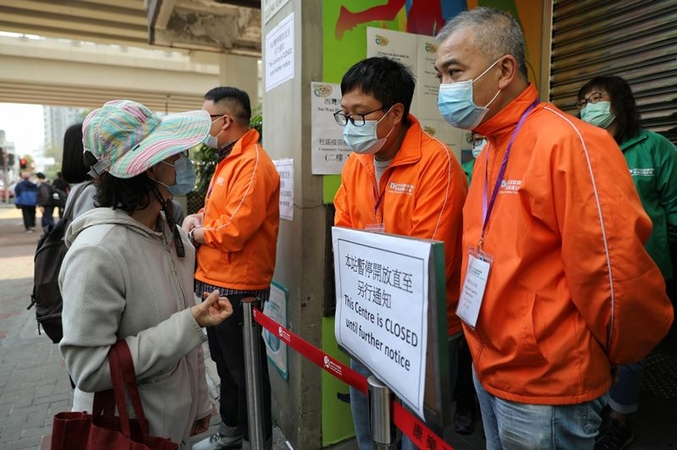 Hong Kong and Macao temporarily suspended covid-19 vaccines manufactured by BioNTech because of a packaging defect, dealing a blow to inoculation drives seen as key to reviving the cities' pandemic-battered economies.

BioNTech and Shanghai Fosun Pharmaceutical Group Co., which has the rights to market the mRNA vaccine across mainland China, Hong Kong, Macaou and Taiwan, have initiated an investigation into the issue and say there is no reason to believe product safety is at risk, according to statements from the Hong Kong and Macao governments.

Hong Kong officials said on Wednesday that they found tilted or loose vial caps and minor stains on a small number of bottles. There were some instances where caps had been pushed out after saline was injected to dilute the vaccine, causing spillage, officials said at a briefing Wednesday.

Vaccine workers had noticed the defective products and reported them to the city's government, who informed the companies, said officials. It was BioNTech and Fosun which then asked Hong Kong to suspend its rollout.

Vaccines in defective packaging were disposed and haven't been used in the city's vaccination drive so far, which has seen about 150,000 people receive BioNTech shots. "People who've gotten BioNTech vaccines can relax," said Constance Chan, Hong Kong's Director of Health.

Still, the suspension risks eroding public confidence in the shot, which more Hong Kong residents were opting for over the vaccine made by Chinese firm Sinovac Biotech Ltd. The former British colony's vaccine rollout has been beset by challenges including a number of post-vaccine deaths, public distrust in the Beijing-backed government and widespread hesitation.

The pandemic has trained an unusual level of scrutiny on vaccines and the processes for making and distributing them. Governments are sensitive to concerns covid shots were developed quickly and don't want to be accused of covering up adverse events or problems, especially in politically polarized Hong Kong.

Most recently, a raft of European countries and some in Asia temporarily suspended the vaccine made by U.K. drugmaker AstraZeneca Plc after reports of serious blood clotting following inoculation, even as the European Medicines Agency affirmed the shots' safety. The fracas has interrupted Europe's vaccine rollout, which was already facing issues over supplies and distribution.

The affected batch of vaccines, 210102, was delivered to Hong Kong and Macao directly from Germany on Feb. 27, according to people familiar with the matter who declined to be identified as they're not authorized to speak publicly. Of this batch, 585,000 doses were supplied to Hong Kong while some 100,000 doses were sent to Macao, they said.

Hong Kong in early March received another batch of doses, 210104, which brought its total supply of BioNTech shots to 1.3 million. Administration of this batch of shots has also been halted out of caution, said a government statement Wednesday.

BioNTech will conduct an investigation at its production facilities, while Hong Kong authorities will look into whether the logistics process -- which Fosun is responsible for -- caused the defects, the officials said. Representatives for Mainz, Germany-based BioNTech couldn't immediately be reached.

Elsewhere in the world, BioNTech is partnered with Pfizer and their mRNA shot is one of the most widely used globally. The Hong Kong halt is the first known instance of a defect of this nature found in BioNTech's shots, which have been administered to over tens of millions of people worldwide.

Any significant delay could raise questions for thousands of residents who have received their first BioNTech doses and are due to return for the booster in the coming weeks. The recommended window between BioNTech doses is three weeks, but the U.S. Centers for Disease Control and Prevention says the second round can be administered up to six weeks later if a delay is unavoidable.

As of Monday, about 5% of the financial hub's residents had received their first vaccine shots. The government has told Hong Kong's business and banking community that local coronavirus containment measures, which are some of the strictest in the world, can't be relaxed until vaccination rates rise.

Though they didn't detail how long the suspension would last, the city is aiming to maintain the schedule for administering boosters of the shots, which are set to start from Saturday after first doses were given on March 10.

Residents have signed up in droves for the BioNTech shots since Hong Kong widened eligibility to adults aged 30-59 earlier this month, an effort to boost vaccination rates to levels needed to fully reopen the economy.

Vaccination is also seen as key to reopening Macao, with the world's biggest gambling hub effectively shuttered for much of the past year, hit by border curbs with the Chinese mainland.

Shipping and administering the BioNTech vaccine is tricky.

Each two-milliliter glass vial comes with a stopper and a flip-off plastic cap with an aluminum seal, and contains enough active ingredient to provide six doses once it's been diluted with saline. It's up to health-care providers to inject the saline into the original vial to dilute the thawed vaccine, which is then gently inverted 10 times -- not shaken -- to disperse the ingredients.