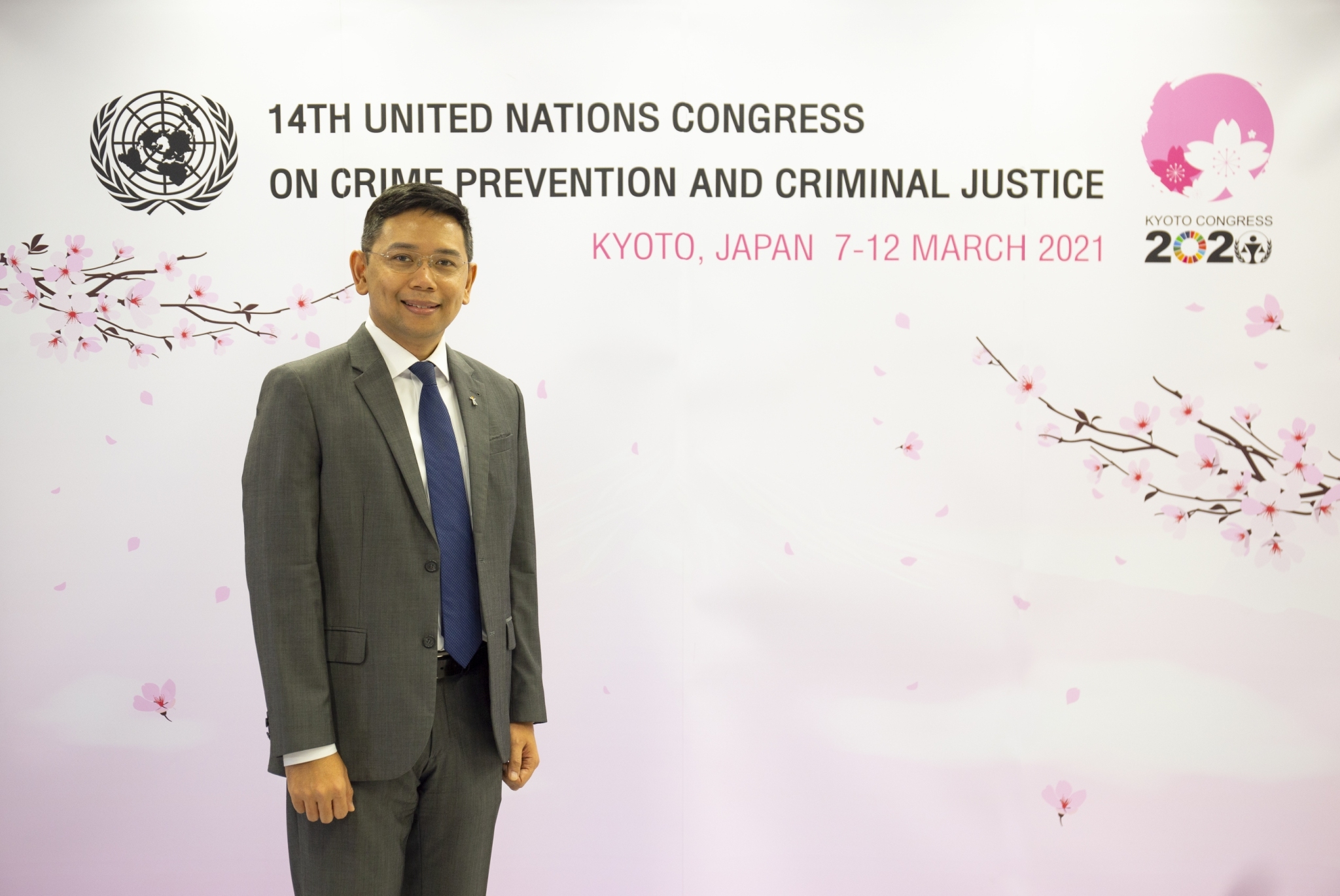 The united nations Office on Drugs and Crime holds the UN Crime Congress every five years in collaboration with host countries. This international forum presents opportunities for participants to exchange knowhow, discuss situations, and shape directions for policies on crime prevention

After World War II, the world became a melting pot and nationalism faded in the face of globalization. Influenced by economic, technological, cultural, and political cooperation, the globalized world also fostered international collaboration on the prevention of and the battle against “contemporary social problems”, including criminal activities.

The 14th UN Crime Congress was held in Kyoto, Japan, in early March 2021 for the purpose advancing crime prevention, criminal justice and the rule of law toward achieving the UNODC 2030 Agenda. The advancement is expected to not only deliver tangible results in fighting crime but also to encourage recovery from the COVID-19 crisis.

Dr. Phiset Sa-ardyen, executive director of the Thailand Institute of Justice (TIJ), summarised the crucial “Kyoto Declaration on Crime Prevention” at the forum, shedding light on the world’s criminal-justice situation and current trends. At the UN Crime Congress, the following four major components of the declaration were addressed:

1. Evidence-based crime prevention: Placing a firm focus on strategic operations that are rooted in indicators, statistics, as well as comprehensive and systematic evaluation of crime-prevention measures. Evidence-based crime prevention, for example, recommends that police performance be evaluated based on crime statistics and local people’s sense of safety with the help of effective mechanisms. Such monitoring and evaluation, however, have faced challenges in practice due to budget constraints.

2. Integrated Criminal Justice System: “Punishment” is meted out to hold wrongdoers responsible for their actions and can be in the form of a fine and/or imprisonment.

At the UN Crime Congress, participants from the judicial field raised questions about the “efficiency” of the current punishment system when considering key indicators such as “Recidivism Rates”. In several countries, including Thailand, there is a high rate of former inmates returning to crime. Therefore, it is necessary to review whether current punishments have effectively achieved their goals in building a peaceful society and respecting human rights in imposed freedom restrictions.

“Imprisonment may not be the best option in some cases. In Thailand, several convicts are given a jail term even though their offences are not serious. These convicts, in fact, could have led normal lives in society if probation had been used. It is also better to send drug abusers to rehabilitation programmes rather than send them to jail. When delinquents are imprisoned, they can get close to criminals and learn to do worse things. They also get few opportunities to make a living after being released from jail. Often, employers require that their employees never have any criminal record.

“Many former convicts may have learned bad things in prison and are often prone to reoffend and return to jail. As a result, a global trend of non-custodial, unharmful-to-society measures is growing.As an organisation that has studied international standards and conducted research on such alternatives, TIJ trusts that it can make contributions on this front,” Dr. Phiset said.

3. Promoting Rule of Law via Culture of Lawfulness: Considered the foundation of a peaceful society, the rule of law thrives where a “culture of lawfulness” is fostered. To win public trust in the judicial process or build public satisfaction with current regulations, a state must demonstrate that the “rule of law” is in place. It is impossible to merely strengthen the rule of law by giving more power to law enforcers because people’s access to the judicial process is also crucial. Educating youth about the rule of law is a good way of developing a strong society.

4. Enhancing Prevention and Suppression of Transnational Organized Crimes: In the face of increasingly advanced technologies, transnational organised crimes have become more severe and complex while the “cost of committing crimes” has lowered. With online platforms, committing crime has become easier. Cybercrimes are a new form of transnational organised crime and they are borderless. Instigators of such crimes and victims may live hundreds of kilometres apart or even in different countries. Laws in their areas may be different, hence international, cross-sectoral collaboration covering different government agencies, the private sector, civil society and academics is necessary.

Dr. Phiset said after attending the UN Crime Congress over several years, he has realised that significant progress is being made. For instance, compared to the two previous meetings – in Bangkok and in Doha, Qatar – the latest forum had a wider base of participants. Previously, attendees were mainly from state agencies such as police units, courts and the Corrections Department. This time, however, participants included members of the private sector, non-governmental organisations, civil society, and academics. This diverse base of participants is most likely a result of topics being discussed in a “wider context” that resonate with the global agenda of “sustainable development”.

“In the past, the criminal justice process was independent of one another though academic-driven collaboration existed in the form of extradition deals. However, several sessions of the UN Crime Congress show that the direction is now shifting to be more in line with the world’s key agendas. The rule of law has been highlighted as an element of sustainable development, and the UN Crime Congress has been realigning the criminal-justice paradigm,” Dr. Phiset said.

The TIJ executive director added that the “Use of Sports to Prevent Youth Crimes” has been added to the UN Crime Congress’s agenda for discussion. To advance crime prevention among youth, TIJ proposed “Integrating Sport into Youth Crime Prevention and Criminal Justice Strategies” at the Commission on Crime Prevention and Criminal Justice (CCPCJ) 2019 forum in Vienna, Austria and underlined the importance of sports in sustainable development.

“We believe sports will give youth both confidence and life skills, which will reduce the risk of them getting involved in crime. Sports can even drive former juvenile convicts in the right direction. Thailand’s Bounce Be Good Club, initiated by HRH Princess Bajrakitiyabha, is training youth in table-tennis and badminton at juvenile observation and protection centres. Professional coaches have been on hand to take care of the students. Continuous investment in the club has transformed former juvenile convicts into athletes, coaches and referees. This approach has delivered the most sustainable results,” Dr. Phiset said.

The UN Crime Congress is also placing more importance on producing outcomes of the meeting in the form of rules that are equivalent to “soft laws”. For instance, the Bangkok Rules now apply to both Thailand and several other countries to solve problems related to specific groups, such as the vulnerable, and to address issues such as violence against children and women. Since these soft laws complement one another, they achieve a synergy and facilitate the pursuits of Sustainable Development Goals (SDGs).

According to Dr. Phiset, Thailand’s state agencies are taking a more holistic approach to crimes by considering economic and social factors, as well as working with relevant organisations from various sectors in crime prevention and suppression. Thailand has been promoting participation in the criminal justice process through novel methods, and in the future, the country’s criminal-justice work could be as follows:

3. Greater awareness of gender equality guidelines: New paradigms will be created for the better treatment of women prisoners and their children, such as better prison environment. In case of minor crimes, support for non-custodial measures will grow stronger;

4. Increased integrated innovations to promote participation in the criminal justice process: Products from the "Wansook" brand from the Corrections Department are now available via Shopee platform;

5. Strengthened multilateral collaboration: The Kamlangjai Project and Street Food project are examples. The latter provides cooking training to inmates who will be released within three months; and

6. Enhanced public communications to reduce the stigmatisation of former inmates.

Thailand, however, needs to further develop its criminal justice system to overcome existing challenges to building a peaceful society. The government, for instance, could help by providing a sandbox experiment in the privatisation of some public services or utilise social-enterprise models.

“The criminal justice process both in Thailand and rest of the world will become more people-centric, increasingly connected to sustainable development, and cross-sectoral collaborations. All these are challenges that practitioners in Thailand must triumph,” Dr. Phiset concluded.