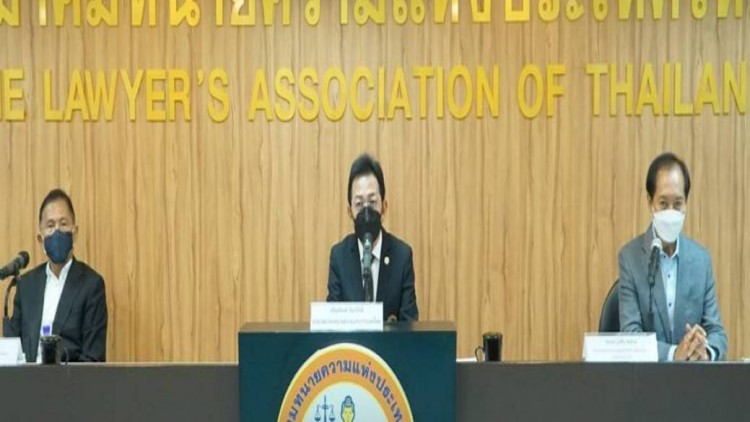 The Thai Sang Thai Party and the Lawyer’s Association of Thailand are preparing to sue Prime Minister Prayut Chan-o-cha for alleged failure to manage the Covid-19 situation.

Thai Sang Thai (National Building Party) executives Pokin Polakul and Watthana Muangsuk on Wednesday met with Narinphong Jinaphak, president of the Lawyer’s Association, to discuss filing a lawsuit against Prayut and his government over its management of the Covid-19 crisis, which has devastated the economy and overwhelmed the country’s public health system.

Pokin was House Speaker from 2005-2006 while Watthana was minister of Industry, Commerce and Social Development and Human Security from 2003 to 2006. In late 2020 they formed the Thai Sang Thai Party together with former Pheu Thai chief strategist Sudarat Keyuraphan.

“The government’s negligence and ineffective handling of the Covid-19 situation has resulted in four waves of outbreak throughout the country with over 800,000 patients and more than 6,000 deaths,” said Narinphong.

“The rising number of infections has exceeded the capacity of the public health system as can be seen from the many people who have died on the streets or in their homes while waiting to be treated at hospitals.”

He added that the state of emergency imposed by the government from March 26, 2020 and extended to September has not slowed the outbreak.

“The centralisation of administrative power to the prime minister and the government means that they must take sole responsibility for the outcome when they exercise power,” said Narinphong.

He said Thai Sang Thai Party’s public campaign to sue the government had attracted around 700,000 signatures from members of the public.

“We agreed that we will sue only Prime Minister Prayut as he is the head of government and the one who announced the state of emergency,” he said. “We have finished drafting the lawsuit document and will submit it to the Central Criminal Court for Corruption and Misconduct Cases on Friday (August 13) at 10.30am.”