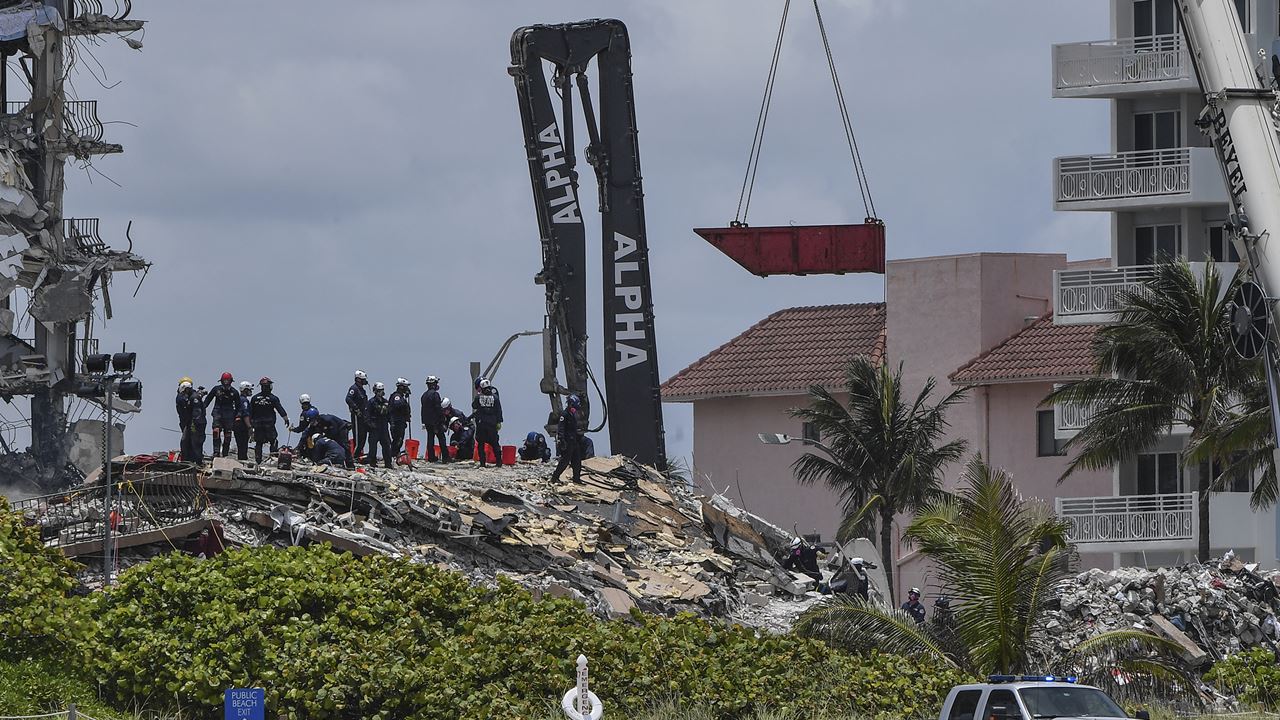 The search for survivors amid the rubble of a Surfside condominium building that partially collapsed entered a fourth day on Sunday.

She said four more bodies have been found in the rubble.

As of Sunday, she said one victim died after being transported to the hospital, and eight victims were recovered on the scene. Four victims have been identified.

"My deepest condolences to the families, the friends, the communities of those who have lost their lives, and my prayers with the family and the whole community as they mourn," she said. "We are making every effort to identify those others who have been recovered, and additionally contacting their family members as soon as we are able."

Surfside Mayor Charles Burkett said search-and-rescue teams had made "substantial" progress overnight and that the fire that had been burning deep within the rubble seemed to have lessened as of Sunday morning.

"I was there this morning and I took a walk around the site and I did see a substantial difference from when I left at about 11 o'clock. So there is progress being made," Burkett said on ABC's "This Week" on Sunday.

Burkett said the only thing he was telling families and loved ones of those still unaccounted for was that crews planned to keep working until everyone was pulled out.

"We are working 24 hours a day, nonstop, nothing else on our mind, with the only objective of pulling their family members out of that rubble safely," Burkett said. "We've got world-class search and rescue people. We've got the dogs, we've got the cranes. We are not resource poor. … We've had a luck problem. We just need to start to get a little more lucky right now."

The director of emergency management for Florida on Sunday welcomed a team from the Israel Defense Forces to help with search-and-rescue efforts.

The delegation includes about 10 reserve officers, "all top experts in engineering & social care efforts," according to IDF.

A separate group of Israeli rescuers was at the site of the condo building within hours of the collapse, according to Cadena International, a humanitarian organization based in Miami.

A difficult decision looms as crews continue to sift through the rubble in Surfside's condo collapse: when to shift the rescue effort to recovery.

Former Miami-Dade fire chief Dave Downey worked at the department for more than three decades and is helping the current chief make the call.

Downey said he has "held the weight" of two similar calls in Florida - one involving a collapsed parking garage, the other the 2018 Florida International University bridge collapse - and two during a mission to Haiti after the 2010 earthquake.

He said there are many elements beyond time to consider: Emergency teams must assess the effects of fire, smoke, rain and humidity and whether any gaps remain in the rubble where survivors could be waiting.

Downey said the final step of the decision-making process will be "de-layering" the collapsed floors using heavy cranes to uncover those possible gaps.

The main reason crews would switch from rescue to recovery is so they can employ new techniques to sort through the pile, he said. Any movements have to be precise at this point to avoid complicating rescue efforts or injuring someone. But in recovery mode, methods will focus on debris removal.

"Listen, we're never going to say there's never a chance for survivors," he said in an interview Sunday.

He said the rescue-to-recovery decision could also apply only to specific areas of the pile, so rescue efforts could continue in one zone but move to recovery in another.

Making the call will not be easy, Downey said.

"It's one of those things that weighs heavy," he said. "I've sat in that seat."

At St. Joseph, a Catholic church a block from the condo building, worshipers gathered Sunday for Mass - but some of the regulars were absent.

Congregation members who lived in at least eight units of Champlain Towers South that collapsed Thursday were missing, according to the church. In some cases, whole families were unaccounted for.

"We pray for those still in the rubble," deacon John Ermer said Saturday night. "We pray they survive."

Despite the loss felt, clergy members spoke about a glimmer of hope they felt. Two congregants, Cesar and Carla Guerrero, were not in the building that night.

Marian Lopez, along with husband Alfredo and son Michael, were among those who made it out alive.

On Sunday morning, Marian had returned to the parish, helping with the Mass.

"She was in good spirits," deacon Roberto Pineda said. "Because that's what faith is all about. It's about living."

Arnie and Myriam Notkin had been missing for almost a day when, late Thursday night, their family got an unnerving call.

"We all froze," said Jake Samuelson, the couple's grandson. It was the Notkins' landline phone in apartment 302 of the collapsed Champlain Towers South, he said. The one that sat next to their bed.

But only static came through when his sister picked up, he said. Two days later, that call and the slew that followed remain a mystery to them - one of many still hanging over the sudden destruction of the Surfside high-rise.

Scores of families like Samuleson's are waiting to learn if their missing loved ones are among the dead as the search for survivors stretches into its fourth day. Samuelson, 23, said he flew into Florida from Atlanta Thursday night to join loved ones, feeling a need to see the ruined condo in person.

"We just want answers," Samuelson said Saturday night. "If it is a sick prank we want to know if other people are experiencing this. Or if they are in the building we want to make everyone aware."

At first, Samuelson said, his family largely dismissed the unsettling call. "My parents went to the building Thursday and saw the damage and just didn't believe anyone could survive what had happened," he said.

But the calls kept coming.

They brought the matter to detectives, Samuelson said, and even their rabbi. Police confirmed that power to the condo was cut, he said, but did not address landlines, which can operate through an outage.

Eventually, they contacted local media. At 9:39 p.m. Saturday, Samuelson said, there was yet another call.

Arnie Notkin, 87, has served his community in all kinds of roles, his grandson said. He was a P.E. teacher in Miami and a Santa for the Surfside police holiday toy drive. "He made a lasting impact on all of his students who still talk about him today," Samuelson said.

Myriam Notkin, Samuelson's "abuela," fled the Castro regime in Cuba as a teenager, working her way up as a banker in the United States, her grandson said. She became a Realtor, too. The Notkins have retired now, he added, but Myriam is "a woman in constant motion."

When the coronavirus pandemic collided with Arnie's birthday, Samuelson said, local police and fire officials helped celebrate from afar. The Notkins looked down from their condo balcony at a giant sign, colorful sign that said "HAPPY BIRTHDAY ARNIE! WE LOVE YOU."

Samuelson said his family prays for a miracle and wants to cling to the calls as a hopeful sign rather than a fluke.

But still: "Even if they are real, do they have the capacity to save them? As of now it seems the answer would be no."