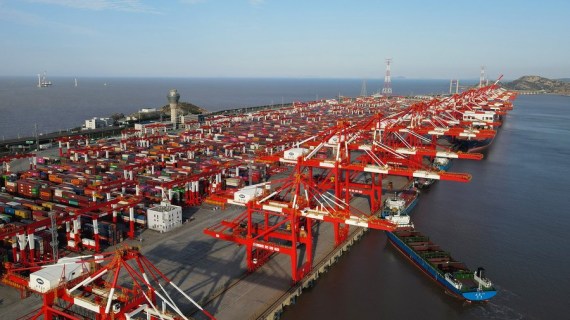 Over the past decades, mega-projects built across China and world-leading developments have propelled the countrys drive to strengthen its transportation network and key infrastructure for the economy.

The world's second-largest economy has its backbone on an "enormous, interconnected and comprehensive transportation system," according to Minister of Transport Li Xiaopeng.

China now leads the world in technology for railways at high altitudes and in extremely low temperatures and is a global player in high-speed and heavy-haul railways, said the white paper titled "Sustainable Development of Transport in China." The State Council Information Office released the report last December.

Boasting eight of the ten highest bridges and seven of the ten longest cable-stayed bridges worldwide, China also tops the world in the total length and number of highway bridges and tunnels in service and under construction, the document said.

The number of highway bridges in China reached around 912,800 by the end of 2020, and the total length surpassed 66.28 million linear meters.

China announced the opening of the Hong Kong-Zhuhai-Macao Bridge in October 2018, which is the world's longest cross-sea bridge. The 55-km-long bridge connects China's southern mainland province of Guangdong with the country's two special administrative regions of Hong Kong and Macao.

According to the white paper, China had 238 certified civil airports throughout the country.

Hailed as the "new gateway" to China, Beijing's new Daxing International Airport has seen its total passenger throughput exceed 10 million a year after it began functioning. The airport was built in less than five years and officially opened to flights on Sept. 25, 2019.

In addition to its capacity of building large airports, core technologies in improving massive estuaries and lengthy waterways have given China around 127,000 km of navigable inland waterways, sending it to the front ranks of the world, noted the white paper.

The large-scale transportation network has supported a leap in the composite national strength, Li said, noting that China is now "running at full steam" on the journey towards a country with a strong transportation system.

Giving priority to transport in its future plans, China will shift its focus from speed and scale to quality and efficiency, from independent initiatives to integrated multimodal development, and from traditional drivers to innovative forces, said the white paper.

Underlining the goal of building up significant strength in transport by 2035, "our country will build a modern comprehensive transport system that is safe, convenient, efficient, green and economical, equipped with world-class facilities, technology, management, and services," the white paper said.