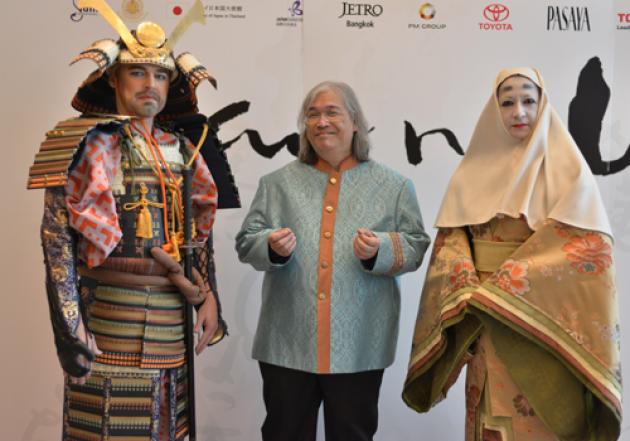 The Buddhist essence of 'Dan No Ura'

SOMTOW SUCHARITKUL’S new opera, “Dan no Ura”, took seven years to compose and will have its long-awaited world premiere next Monday evening, with a second performance set for Tuesday. Here the composer shares his thoughts about this work.
The sea battle known as Dan no Ura took place in 1185, the culmination of a fratricidal war for control of Japan by two great families, the Heike and the Genji. The battle ended with the mass suicide of all the royal women and shattered a way of life that modern Japanese refer to as an age of artistic flowering, elegance, and beauty.
It also established a system of military rule that marginalised the imperial family for 800 years.
The high drama of this tale, the splendour of the costumes of the day and the challenge of setting an opera completely at sea were reasons enough to write this opera. No one had ever attempted to turn this pivotal moment of history into an opera.
But, for me, the chief reason for doing so is that the story provides a clear and penetrating view of the unchanging nature of the human heart.
Like Homer’s “Iliad”, “The Tale of the Heike” – the book from which much of my source material was drawn – is a “national epic” set in a remote time, in which the heroes and heroines are larger than life and speak of big concepts like honour, loyalty, devotion and sacrifice.
But, also like “The Iliad”, yet unlike many other national epics, “The Tale of the Heike” shows us human beings that are completely recognisable in the contemporary world. In my opera I have tried to draw all of them as complex individuals that people today will recognise.
There is the strong matriarch who sees with crystal clarity what her sons are too blind to see, the bickering Heike generals with their individual agendas, and the powerful Genji warriors who know they are trapped in an escalating cycle of destruction. We have too the boy-emperor who is so close to death that he can already speak to the dead and to the gods themselves.
In fact, the idea of warring factions who shouldn’t be at war has a powerful resonance with where we are today in this country. The important lesson the epic teaches – that “the proud fall in the end ... like a dream in a spring night ... they are like dust in the wind” – is one that people today should take to heart.
At the very centre of the epic – and of Buddhism – is the concept of mujo – tran
sience. Musically I have represented the idea with a four-note theme whose harmonies are constantly shifting. The theme begins with a leap of a third, representing man’s attempts to break away from transience, and falls, step by step, to the original note, just as Buddhism teaches that all man’s endeavours inevitably succumb to the cycle of karma.
As the battle turns, via betrayal, in favour of the Genji, the Lady Tokiko, grandmother of the eight-year-old emperor, sings the words that will seal the family’s fate. They are so unforgettable that I took them verbatim from the original text. “I will serve my emperor one last time. I will accompany him to the next world.”
The aria that follows – in which she promises her grandson that there is another capital city beneath the waves, and then leads the women of the court in a mass suicide by jumping into the sea – becomes slowly dominated by the mujo motif. Finally those four notes become all the notes that can be played.
Deep philosophy, stirring emotions, and incredible costumes and spectacle – plus the challenge of doing a sort of cross between an opera and an Akira Kurosawa film – what composer could resist the temptation?
INESCAPABLE
MUJO
- “Dan no Ura” will be performed at 8pm on Monday and Tuesday at the Thailand Cultural Centre.
- Trisdee na Patalung conducts, with a large international cast on stage.
- Tickets are Bt500 to Bt3,000 at ThaiTicketMajor. For more details, e-mail [email protected]