England cruise 4-0 past Ukraine into the Euro 2020 semis

England came off with a perfect start and opened the scoring with only four minutes into the game as Raheem Sterling's fine through ball allowed Harry Kane to fire past Heorhiy Bushcan from very close range.

Ukraine needed some time to gain a foothold into the contest but had their first effort on target with 17 minutes played when Roman Yaremchuk unleashed a dangerous shot to test England goalkeeper Jordan Pickford.

However, it remained Ukraine's only chance on target in the first 45 minutes as England controlled possession without creating clear-cut opportunities.

After the restart, the Three Lions gave the Ukrainians a mountain to climb as Harry Maguire doubled the advantage after nodding home Luke Shaw's free kick into the box with two minutes into the second half.

Andriy Shevchenko's side was shocked and unable to respond whereas relentless Englishman made it three in the 50th minute when Shaw's second assist found Kane, who nutmegged Bushcan with a header from central position.

England controlled the proceedings for the remainder of the game as Ukraine lacked in ideas and penetration.

With the result, England advance into their first Euro semi since 1996 and will now return to Wembley to encounter in-form Denmark on home soil.

"It is a great feeling. Back-to-back semi-finals at a major tournament is a great achievement. I don't want to be a party pooper, but we don't stop here. We've got another big game coming up and we want to go further this time," England defender Harry Maguire said.

"It is a special night for England. All players have staged a great performance in this tournament, but we have to continue and stay focussed," England head coach Gareth Southgate said. 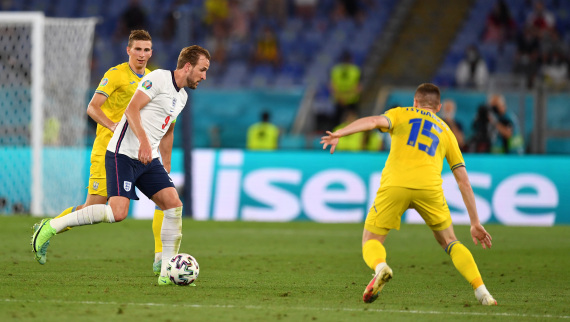