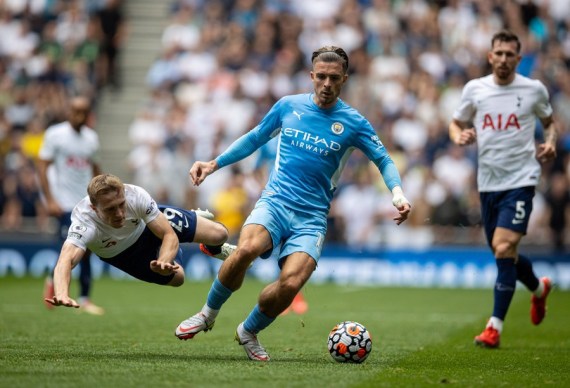 Manchester City's title defense got off to a false start as they lost 1-0 to Tottenham in their opening game of the season on Sunday afternoon.

Kane was not included in his side's squad with coach Nuno Espiritu Santo saying that the striker, who only returned to training a week ago, was not match fit.

Jack Grealish made his debut for Manchester City, but the game showed just why Pep Guardiola is looking to sign Kane as his side played some pretty football, but lacked bite in their rivals' area.

West Ham began where they left off last season with a 4-2 win away to Newcastle United after twice coming back from behind in Sunday's other game.

Callum Wilson put Newcastle ahead in the fifth minute only for Aaron Cresswell to level in the 18th minute and although Jacob Murphey put Newcastle back in front before halftime, a second-half blitz saw Said Benrahma, Tomas Soucek and Michail Antonio blitz Newcastle with three goals in 13 minutes, with Antonio also seeing a penalty saved in that spell.

Bruno Fernandes scored a hat-trick on Saturday as Manchester United beat Leeds United 5-1. Fernandes put his side ahead in the 30th minute and although Luke Ayling drew Leeds level three minutes after halftime, goals from Mason Greenwood and Fernandez in the 52nd and 54th minute decided the game before Fernandes completed his hat-trick on 60 minutes and Fred made it 5-1 eight minutes later.

Jadon Sancho made his debut as a late substitute to end a perfect start for Ole Gunnar Solskjaer's side.

Chelsea also got off to a confident start as they ruined Patrick Viera's debut as Crystal Palace coach with a 3-0 win at Stamford Bridge, with Marcos Alonso and Christian Pulisic putting them 2-0 up at the break before defender Trevor Chalobah scored his first Premier League goal just before the hour.

Virgil van Dijk was back in defense as Liverpool spoiled Norwich's return to the Premier League with a 3-0 win at Carrow Road with goals from strikers, Diogo Jota, Roberto Firmino and Mohamed Salah.

Jamie Vardy netted the only goal of the game as Leicester City kicked off their season with a 1-0 win at home to Wolves, who moved the ball around well, but looked blunt in attack.

Rafa Benitez may not have been a popular choice to replace Carlo Ancelotti, but the former Liverpool boss' stock will have risen after second-half goals from Richarlison, Abdoulaye Doucoure and Dominic Calvert-Lewin helped his side win after conceding an early Adam Armstrong goal against Southampton.

Watford had a winning return to the top flight with goals from Emmanuel Bonaventure, Ismaila Sarr and 'Cucho' Hernandez taking them to a 3-2 victory at home to Aston Villa.

Newly promoted Brentford kicked off the new season in winning style on Friday night as goals in each half from Sergi Canos and Christian Norgaard gave them a 2-0 win over a very disappointing Arsenal.