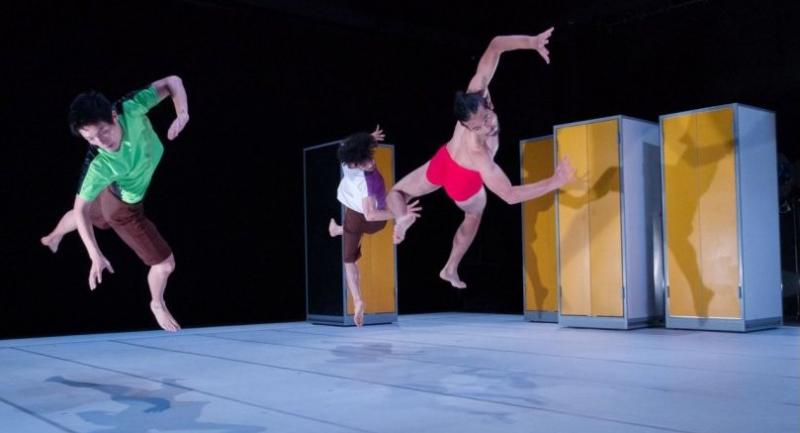 "One Piece", as part of "Hotpot: Japan" was originally for female dancer; now the opposite

By Pawit Mahasarinand
SPECIAL TO THE NATION
HONG KONG

PERFORMING ARTS festivals are going inter-disciplinary. They’re blurring genre boundaries by bridging their gaps and bringing in new groups of audiences. Some no longer put the category of each work in the brochure, as they choose works which fit the theme of each festival instead of what’s currently popular on the international tour. Opting for inclusivity instead of exclusivity, “There’s something for everyone” has now become the catchprase of many events. Despite this trend, it’s still a delight to attend a festival that not only focuses on a genre but also the region. Such is the case for the inaugural City Contemporary Dance Festival (CCDF) late November in Hong Kong. Living up to its name, the six-day festival only presented contemporary dance performances from East Asia – namely China, Hong Kong, Japan, Korea, Macau and Taiwan – at several venues in Kowloon, Hong Kong and the New Territories. It’s organised by the 38-year-old City Contemporary Dance Company (CCDC), under the artistic directorship of Willy Tsao, a pioneer of contemporary dance in Asia. “Ice Hot” organisers were also guests here in the SAR after giving useful suggestion in curating this East Asia counterpart.

In the evening, larger-scale works by more established companies, from Japan, South Korea, Beijing, Shanxi and of course Hong Kong, were presented in larger venues. This part of the programme was built on CCDC’s close relationship with their Japanese and Korean counterparts, respectively Noism and Daegu Contemporary Dance Company.

And while the audience for the afternoon programmes was mainly artists from other groups in the festival and international programmers, presenters and producers, who were part of DanceX International Dance Network, the evening counterpart was mainly the Hong Kong dance-going public. A discussion with the choreographers was also organised after every performance. On the second-to-last morning of the festival, a major issue was raised at a symposium titled “ChatBox: Re-Imagine Dance in Asia”, co-organised by the International Association of Theatre Critics (Hong Kong) [IATC-HK] and featuring Swedish critic Cecilia Djurberg, Taiwanese multi-disciplinary artist and critic Liu Chun-Liang and myself.

Having observed that tradition was somewhat missing from the works he had already watched at CCDF, a European producer, a member of DanceX International Dance Network, questioned the contemporaneity of East Asian dance and how it differs – or whether it should – from the European counterpart.

Many dance festivals in Europe have been performing the role of gatekeepers selecting certain works while ignoring others, rather than gateways through which works from other regions can naturally flow. This has been continuing for so many years that when it comes to contemporary Asian dance, many European audiences are expecting a certain amount of interaction between modernity and tradition. And without the latter, such as in CCDF, they may deem the work insignificant or old-fashioned. This is despite the fact that most contemporary Asian choreographers, giving their training background, are neither trained nor interested in traditional arts – and most contemporary dance works that Asian audiences are watching have little, or nothing, to do with tradition as well, as evidenced in CCDF. We cannot simply assume that all Asian choreographers think and work like Taiwan’s Lin Hwai Min, Indonesia’s Eko Supriyanto, or our Pichet Klunchun, can we? It is widely known, and generally agreed, that, as the amount of artistic possibility rises, the scope of contemporary dance, like that of contemporary arts in general, continues to expand – and my Swedish colleague also noted the lack of conceptual dance in CCDF, a comment with which I concurred. With this diversity and possibility in mind though, one has to wonder whether the restricted point of view towards contemporary Asian dance, in this day and age when many Asian countries’ technological advances far exceed those of their European counterparts, can be regarded as a kind of neo-colonialism. That’s not, however, a debate for this page, so back to CCDF.

One of my CCDF favourite works, the image of the opening scene of “Nina—materialize sacrifice”, which was presented at Sibiu Performing Arts Festival in Romania earlier last year, is still fresh in my mind. The discipline instilled in Noism 1’s female dancers’ bodies was so high that it took me many seconds before I realised that they were humans, not mannequins. As obvious as it might sound – and of course contemporary dance does not need to be abstract – the contrast between the manipulating male dancers’ movements and the manipulated female counterparts’ throughout this full-length work was proof of strong dramaturgy which also reflected the technologically advanced and highly patriarchal society. Works that premiered more than a decade ago like “Cold Arrow–Game of Go (Weiqi)” by China’s Beijing Dance/LDTX’s and “Moon-Looking Dog”, which was at Biennale de la danse a Lyon in 2000, by Korea’s Daegu Contemporary Dance Company did not look dated either. With their firm places in the history of contemporary dance in both countries, if not East Asia or Asia in general, the two works, respectively by choreographers Willy Tsao and Hong Seungyup serve as links, or references, to what and how the younger generations of artists are working today.

It’s also noteworthy that apart from the dancers’ technical prowess and the choreographers’ insights, music and production design play important roles in contemporary dance. Some choreographers take as their inspiration existing music scores, either famous or lesser-known ones, and, accompanied by one complete number after another, their works may sound and look familiar to some audiences, especially those with a European gaze. Meanwhile others, with more resources, have composers or sound designers create the soundscapes that are more specific to their works. Three noteworthy examples are France-born Vietnamese composer An Ton That’s for “Nina”, his Korean counterpart Kim Te-kn’s for “Moon-Looking Dog” and Japanese colleague Chihako Ezawa’s for Co. Un Yamada’s “One Piece”. The memorable CCDF experience made me look back. I have attended the Hong Kong Arts Festival (HKAF) on an annual basis since 2008 and yet scarcely watched contemporary dance and theatre works from Hong Kong and East Asia here. I can also think back to when I visited Hong Kong for the first time–also the first time I was in a foreign country–in the late 1970s when my enthusiasm was for Japanese toys and McDonald’s Fillet-o-Fish, which were not yet available here. Recently, that has changed to made-in-Hong Kong clothes and some new dim sum creations which are not available elsewhere. That is to say: this so-called “Asia’s World City” still has plenty more of the local contemporaneity for me, and any foreign visitor, to discover.

And taking further our inspiration from “Ice Hot” to “Hotpot”, I was talking to Kuik Swee Boon, the founder and artistic director of The Human Expression Dance Company and M1 Contact Contemporary Dance Festival in Singapore. We both agreed that our region still lacks a regional contemporary dance festival – and the existing two dance festivals namely the biannual Indonesia Dance Festival (IDF) and annual da:ns festival, by the Esplanade—Theatres on the Bay have a much wider scope. And so Kuik and I both proposed a name for a first Southeast Asian counterpart of “Hotpot”: his was chicken rice and mine curry. Does the fact we couldn’t reach an agreement mean that our region is too diverse for the contemporary dance platform to be held? Or, with the current traffic that most frequently passes through the island state, financially and artistically, in addition to all members of the AEC governments who seem to be interested more in tradition than contemporaneity, would our platform be possible only in Singapore?

The writer’s trip to CCDF was fully supported by CCDC and IATC-HK. Special thanks to Bernice Chan, Willy Tsao, Karen Cheung, Carrol Ho and Jacky Fung.

- Visit www.ccdc.com .hk to check the next programs by CCDC and www.IceHotNordicDance.com for the news about the upcoming dance platform in the Iceland capital this December.