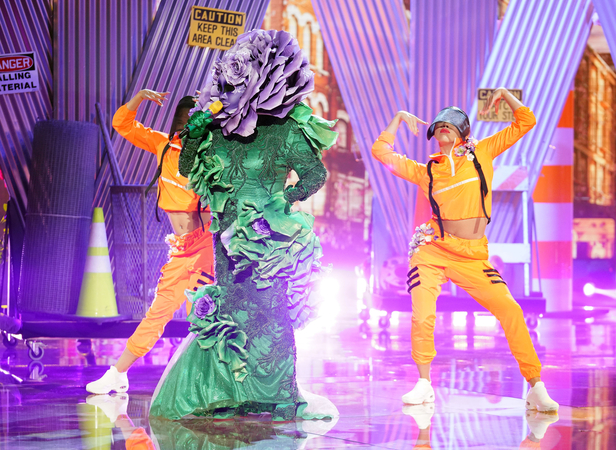 On a momentous Wednesday in March, the world changed. Within the span of a few hours, the NBA suspended its season, actor Tom Hanks revealed he had tested positive for the coronavirus and President Donald Trump gave a rare Oval Office address on the growing threat.

That same night, the Fox reality-show hit "The Masked Singer" attended to a different matter. The singing character of Bear was revealed to be one-time vice presidential candidate Sarah Palin, who commemorated her "unmasking" with a spirited performance of Sir Mix-a-Lot's "Baby Got Back."

Coronavirus-induced quarantines have led to vast sections of American entertainment being shut down or reined in. But "The Masked Singer" has powered along like it's any other spring. The show, which airs Wednesday nights, has garnered and even grown its audience while others have struggled.

And because it concluded taping in February, it has kept up a schedule of new performances that, with its raucous live crowds, seem to have been zapped in from a distant historical period.

"What we're finding is that viewers love a show that gives the feeling that this time, post-covid, is no different than the time pre-covid," said Peter Hamilton, a veteran consultant for unscripted television. "A show exactly like 'Masked Singer.' "

But nearly all have been thrown into disarray by the virus, which has halted the live spectacle on which these shows rely.

After suspending production for a month, ABC's "American Idol" has just picked it up again but with the top 20 contestants recording performances from their homes and panelists judging from theirs - a major switch from its live shows at a theater in Los Angeles.

NBC's "The Voice" has been forced to retool its un-shot final episodes, and no one quite knows what they will look like.

And producers of "America's Got Talent," NBC's summer juggernaut, haven't shot its final rounds, leaving the show in limbo; many of its performers need a full stage, something they're unlikely to find in their basements.

"The Masked Singer," though, will air all its competition episodes as planned all the way to the season finale on May 20, a fact that could well seem mystifying to viewers who have watched so many of its counterparts disrupted. The show will likely continue to draw high ratings throughout.

What makes "The Masked Singer's" success even more surprising is its noisy tone runs counter to television's current trend of intimate, stripped-down and Zoom-like musical performances.

"If you had to predict which show was going to do well when the Living Room concert and all that began, 'Masked Singer' would be one of the last you'd choose," said one executive at a rival network, referring to the group of benefit concerts from performers in their homes. The executive spoke on the condition of anonymity to be able to speak about a competitor.

Last month "The Masked Singer" even managed to launch "After the Mask," a postgame interview show of sorts, shot mostly remotely. The first two episodes saw a retention of about half the flagship's audience, a high number.

Adapted from a South Korean hit beginning early last year, "The Masked Singer" features a panel of regular and rotating judges in front of a boisterous studio audience. Each episode features several musical performances from a mystery character in elaborate disguise, usually as an animal or food; they sing in their own voice but speak through distortion technology.

After characters are eliminated, their identity is revealed; past personalities include Tony Hawk, Chaka Khan, Bret Michaels and, of course, Palin. The show has a circuslike atmosphere, with many costumed supporting characters, heavy doses of showmanship and a free-for-all bantering spirit between panelists and contestants.

The coronavirus has been one more challenge for a broadcast-television sector beset by them in recent years. Yet "The Masked Singer" is proving adept at avoiding virus problems, like it has many of the others.

About 9 million people per week watch "The Masked Singer." But the bigger story is the youth of those viewers: The show this spring has drawn more adults ages 18 to 49 than any other show in 2019-2020 by a margin nearly 50 percent greater than its nearest competitor. That competitor, "The Bachelor," wrapped its season March 9, just days before the coronavirus crisis exploded in the United States.

Part of "The Masked Singer's" corona-era success, experts say, is a function of schedule momentum. The show experienced no delays; it was able to wrap its entire season by the end of February, thanks to an accelerated schedule that has it shooting three episodes each week. (The presence of so many celebrities, in contrast to the ordinary-citizen contestants on other competition shows, places a time squeeze; it proved lucky here.) The show began taping in December to make a deadline for a post-Super Bowl slot Feb. 2 and barely slowed down until it wrapped by the end of that month, before states imposed stay-at-home rules.

During a recent episode, the only hint the world had changed came from a brief voice-over recorded later by host Nick Cannon. "While you're safer at home, our singers' secrets are safer with us," he said.

A Fox spokeswoman declined to make "The Masked Singer's" showrunner, Izzie Pick Ibarra, or the head of the network's reality division, Rob Wade, available for comment for this story.

The show also has the benefit of forgoing live episodes. While many reality-competition series opt for them, partly to tamp down on spoilers, "The Masked Singer" instead rolls the dice. It tapes the shows months in advance but enforces elaborate secrecy requirements for participants and limits in-studio audience during character reveals, making sure it doesn't need to still be going in April or May.

But experts say scheduling continuity is only one reason "The Masked Singer" is flourishing. Also important is the show's pre-covid vibe - far from seeming out of step, they note it's become a kind of counterprogramming advantage.

"One of the things that made 'The Masked Singer' appealing when it first came on was its ridiculousness, its ludicrous fun, its masterpiece stupidity," said Robert Thompson, a professor of popular culture and television historian at Syracuse University. "And I think one of the things that makes it appealing now is that it doesn't have any of the melancholy or sincere piano tinkling of so many other shows and every other commercial on TV. People watch all of those and can't wait to get back to the dancing llamas."

"The Masked Singer" has sometimes gone the extra step to preserve that anti-earnest quality. Even "After the Mask," which has been recorded during the time of quarantine, has featured a high level of cartoonishness and trash talk. Only occasionally do performers puncture that bubble.

When they do, though, they can inadvertently explain their show's success.

After Michaels, the former Poison frontman and reality-TV franchise, was eliminated (he played the character of Banana; fans showed their adulation by making peeling gestures) he came on "After the Mask" from his home.

Cannon asked how he felt about "The Masked Singer" now that he'd appeared on it.

"I want this to go on forever," he said. "It's such an upbeat positive party. The world needs it right now."