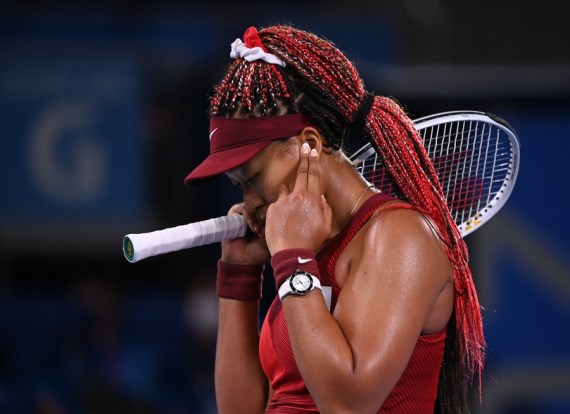 Japans tennis superstar Naomi Osaka crashed out of the womens singles third round at the hands of the Czech Republics Marketa Vondrousova in straight sets at Tokyo 2020 on Tuesday.

Osaka struggled against an opponent she had never faced before on the professional circuit, and the world No. 2 player suffered a 6-1, 6-4 defeat.

"I definitely feel like there was a lot of pressure for this," Osaka said of playing on home court.

Osaka, who lit the cauldron at the Olympics opening ceremony on July 23, said, "It's maybe because I haven't played in the Olympics before and for the first year [it] was a bit much."

Osaka had her serve broken in the first and third games, going 4-0 behind before pocketing her only game of the set. But Vondrousova broke the Japanese's serve again en route to a 6-1 first-set win.

Osaka started the second set in stronger fashion, breaking her Czech opponent once, but the 42nd-ranked Vondrousova fought back and took the second set and the match after breaking Osaka's serve in the final game.

Osaka said everything had gone wrong in her defeat. "If you watch the match then you would probably see. I feel like there's a lot of things that I counted on that I couldn't rely on today."

Said Vondrousova, "Of course it's one of the biggest wins of my career." The Czech player now heads into the tournament's quarterfinals.

Golden taekwondo coach Choi soon to be a Thai