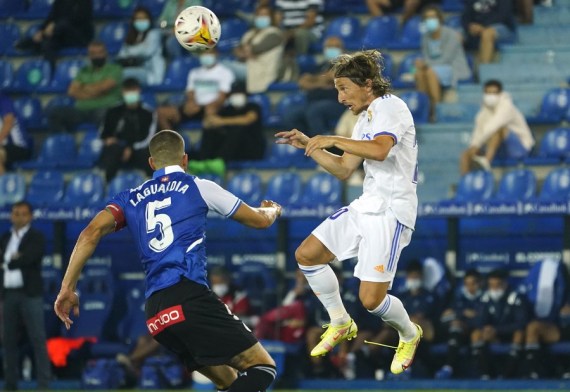 Real Madrid celebrate a 4-1 win away to Alaves in La Liga season opener, while Chinas Wu Lei played 63 minutes in Espanyols return to the top flight.

Real Madrid kicked off the new season Saturday with a 4-1 win away to Alaves thanks to two goals from Karim Benzema and a header from defender Nacho Fernandez.

Gareth Bale and Eden Hazard both started for Real Madrid, but the game was even in the first half and it wasn't until the 48th minute that Benzema opened the scoring after a move involving Bale and Hazard.

Nacho then doubled Real Madrid's lead following a smart free kick and good work from Rede Valverde allowed Benzema to net his second of the game.

Although Joselu got a goal back from the penalty spot, Vinicius Jr added Madrid's fourth in injury time to complete a satisfactory return for Carlo Ancelotti.

Saturday's three other games all ended in draws with Espanyol returning to La Liga with a 0-0 draw away to Osasuna. Wu Lei played 63 minutes for Espanyol on their return to the top flight.

Mallorca took a point on their return to La Liga with a 1-1 draw at home to Betis, after Betis striker Juanmi canceled out Brian Olivan's first half opener with the help of a big deflection off Mallorca keeper Manolo Reina.

A 96th minute equalizer from Cadiz forward Alfonso Espino rescued a point for his side at home Levante, who led though Jose Luis Morales' 50th top-flight goal in the 39th minute of the game.

Levante did enough to win the game, but Cadiz's pressure in the closing moments saw them rescue a point that looked to be lost.

On Friday night, Carlos Soler got Valencia and new boss Pepe Bordalas off to a winning start with a 1-0 win at home to Bordalas' former club Getafe. Valencia had defender Hugo Guillamon sent off in the second minute of the game, but Soler's first half penalty was enough to give them a win against a rival that had a lot of the ball, but looked light in attack.

La Liga Preview: The heat is on as new La Liga season kicks off in Spain