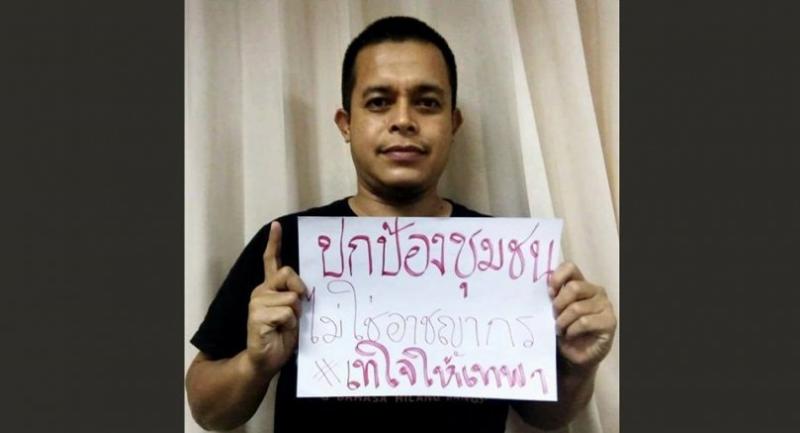 A prominent activist against the Thepa coal-fired power plant says he will sue government spokesman Lt Gen Sansern Kaewkamnerd for defamation over a sexual misconduct slur.

Mustarsheedeen Waba’s lawsuit stems from a remark made by Sansern on the TV programme “Thailand Moves Forward”, which promoted government policies.

Sansern speculated about Mustarsheedeen’s disappearance after the police crackdown on an anti-Thepa demonstration in Songkhla last November, suggesting the reason could have been due to him meeting with a secret lover.

Mustarsheedeen said such a remark was a very serious insult for a Muslim like him and while he had not originally intend to sue Sansern, his lawyer had suggested he file a defamation case against Sansern in order to clear his name and raise the issue publicly.

“I do not feel disgraced by his false claim, because Sansern spoke poorly about me without any proof, but this was not the first time that he had slandered other people – he has also wrongly accused people opposed to the government’s policy in order to create misunderstandings about them to the public,” he said.

“One of the most notable examples was when he presented a fake relationships chart of people involved in a mission to overthrow the monarchy, or his ‘dethrone chart’. The government spokesperson should not behave like that.”

He said his lawyer was now gathering evidence to sue Sansern. The exact date the complaint would be filed had not yet been determined, he said, but it would have to be done within 90 days of the offending statement.

Sansern has acknowledged the possible defamation lawsuit against him, said he was ready to defend himself in court and added that Mustarsheedeen was within his rights to file the lawsuit.

“I have already made it clear that my remark did not mean to say that Mustarsheedeen committed adultery,” he said, “but some people twisted my words and caused the misunderstanding.

“If anyone has any doubts about my statement, they can watch a recording of the programme and listen to what I actually said.”