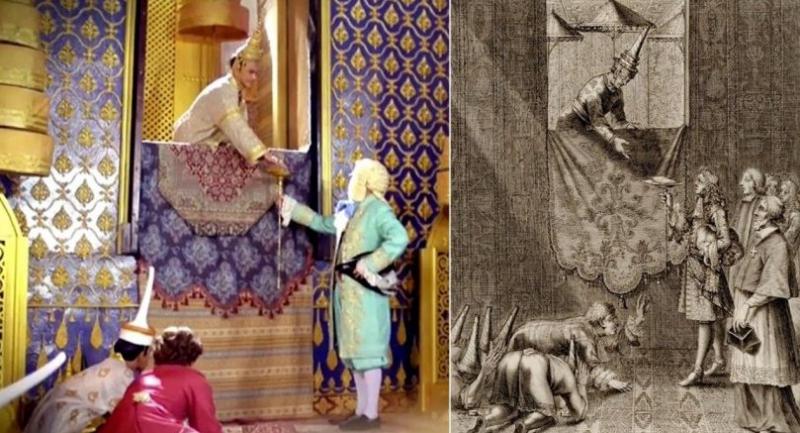 A MEGA-HIT historical TV soap opera not only transports viewers to the Siamese Kingdom of three centuries ago, but also re-enacts clever diplomatic moves by the most prominent king of the period.

In line with the best historical TV dramas, “BuppeSanNivas” (Love Destiny) is playing a vital role in bringing alive the nation’s history for people living in the present time. The soap opera’s backdrop is the Ayutthaya period during the reign of King Narai the Great, who ruled the kingdom over 300 years ago.

The series admittedly adds a flavour of “drama” to the history of the period, but has brought to life the brilliant diplomatic moves of King Narai.

“I’m not surprised why King Narai was bestowed with the title ‘the Great’,” said Adisak Panupong, former Thai ambassador to several countries.

“He was faced with internal and external battles. But with his wise vision, he succeeded in balancing the power between his noblemen and outsiders,” Adisak told a recent seminar entitled “A look back into Thai history with BuppeSanNivas”.

Adisak noted that the series focuses on an era when the Ayutthaya attracted the attention of numerous foreign countries, including Holland, France, Persia and China, who were eyeing to occupy the kingdom.

King Narai ruled from 1656 to 1688 and was arguably the most famous Ayutthaya king. His reign coincided with the most prosperous times of what we now call the “Ayutthaya Era” and saw great commercial and diplomatic relations with foreign states in the Middle East and the West.

Adisak pointed to a smart move by King Narai that attracted huge interest among viewers of the TV series and generated widespread debate.

In that scene, King Narai is seen bending down to Chevalier de Chaumont, the first French emissary of King Louis XIV to Siam, who stood in front of the Siamese king. De Chaumont wanted to hand a letter from Louis XIV directly over to the king in the western manner at the Hall of Sanphet in 1685.

But in the same scene, Greek adventurer Constantine Phaulkon was seen prostrating himself in the lower left corner, as he made a gesture in an attempt to get the French envoy to raise the letter up to the king to reflect his status.

“I give my vote to the king’s decision [to bend down]. That was very wise,” said Adisak. “His manner pleased all sides, except the king’s ‘khun nang’ [noblemen].”

In French diplomatic culture, ambassadors are seen as important persons because they represent their king. So de Chaumont wanted to hand the letter directly to King Narai – king to king – but Thai people at that time gave importance to the letter itself, rather than the ambassador who carried it, Adisak explained.

After the incident, King Narai sent the first mission to France, led by Kosa Pan and two other diplomats, he added. Thai ambassador Kosa Pan and two other diplomats have an audience with French King Louis XIV at Versailles Palace in 1686.  Photo Wikipedia

“King Narai was marvellous at moving diplomatic affairs. He knew how to seek mutual consent and how to forge a compromise between the two sides,” Adisak said.

During the later years of his reign, King Narai gave his “favourite” – Greek adventurer Phaulkon – so much power that the Greek man effectively became the chancellor of the state.

Through the arrangements made by Phaulkon, the Siamese kingdom forged close diplomatic relations with the court of Louis XIV and French soldiers and missionaries filled the Siamese aristocracy and defence forces to counter the influence of the Dutch at that time.

The French tried to convert King Narai to Christianity but the king again succeeded in neutralising the French attempt, according to the vice minister to the PM’s Office Minister ML Panadda Diskul.

Panadda said he was impressed by King Narai’s speech in which he rejected an invitation by the French king to convert to Catholicism.

“Wasn’t it God’s desire to create things and all living creatures that have different appearances and minds, as well as religions?” asked King Narai.

“It would be difficult for me [King Narai] to change my belief in a religion which has been believed by my people [the Siamese] for more than 2,000 years,” Panadda quoted from the king’s speech to the French ambassador.

The dominance of French officials at the king’s court caused friction between them and the native mandarins and led to the turbulent revolution of 1688 towards the end of King Narai’s reign.

“It was a turning point in Thai history regarding relationships with foreign countries,” noted Adisak. “We stopped contacting foreigners because of Phra Phetracha, who usurped the throne from King Narai.”

He added that a hateful sentiment towards foreigners spread at that time, and King Phetracha reversed the pro-Western policies of King Narai and ejected foreigners from the kingdom.

The Siamese had to wait until the era of King Rama II of the Rattanakosin Era to resume substantial contact with foreigners, the ex-ambassador said.

“With the king’s vision, Siam lost nothing while foreigners still love us,” said film director Viroj Srisitsereeamorn, who advised the TV series’ production team on history.

“Actually, the king also served as the kingdom’s public relations director as he helped promote several tourist attractions in Ayutthaya Kingdom to foreigners.”

First launched in mid-February, “BuppeSanNivas” has been a big hit in Thailand, also drawing audiences in Cambodia, Laos, Vietnam, Korea, China and Russia who watch a version with subtitles in their own language as well as in English.

The series, which will end later this month, is about a kind-hearted woman, “Kedsurang”, whose soul is transported back in time to the Ayutthaya period to live inside the body of a beautiful woman called “Karaked”.