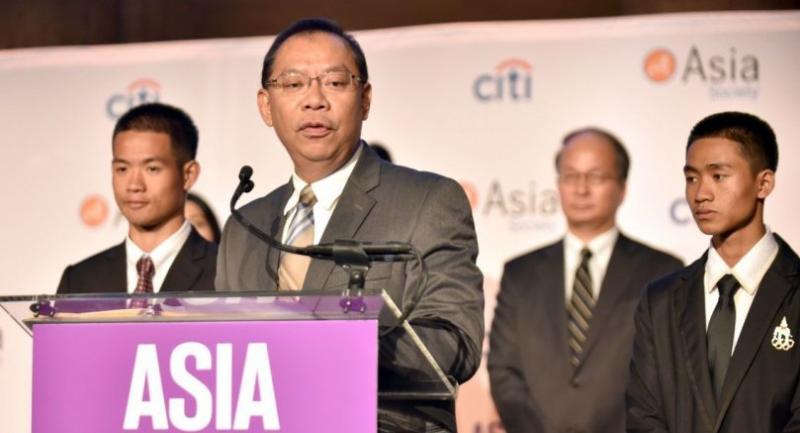 THE multinational rescue operation to free the Mu Pa football team members from Tham Luang cave in Chiang Rai province should be an inspiration for people around the globe to help one another, the mission’s chief, Narongsak Ostanakorn, said in New York.

“I hope this experience inspires people to start living for others,” Narongsak said. “That would be a game changer for the world.”

Narongsak was speaking after receiving the 2018 Game Changer of the Year award at a ceremony hosted by Asia Society.

Adul had earned international praise for his English-language skills during a conversation with two British divers who first found the group 10 days after they had gone missing, without food in the dark, cold and flooded cave. Ekkapon was also hailed for taking care of the boys and for his advice in helping them survive the ordeal.

The other Mu Pa members were attending the International Youth Games in Buenos Aires at the invitation of the International Olympic Committee. They will follow the three and take part in “Thanking the World” activities in New York.

In a panel talk hosted by Asia Society’s Tom Nagorski, Ekkapon told UPI news agency through an interpreter, “It is unbelievable that everybody, every person around the world, would come and rescue us. I would like to express my thanks and gratitude to everybody who helped us.”

Narongsak was quoted as saying that there was a lot of pressure on his shoulders. By the 10th day of the mission, people didn’t believe [the children] could be still alive.”

UPI reported that inside the cave, where the group may have been digging a tunnel to the outside world, Ekkapon began to meditate and taught the boys to do the same.

Ekkapon, a former Buddhist monk who guided the teens to stay calm, may have saved their lives, said the governor.

Adul, who has been the focus of media attention said on Tuesday, “I’m not special. I am just like anybody else.”

The same award was also presented to Indra Nooyi, the chairman and former CEO of PepsiCo, the heroes of Fukushima, and Dr Munjed al-Muderis, who has given injured men and women the gift of mobility.