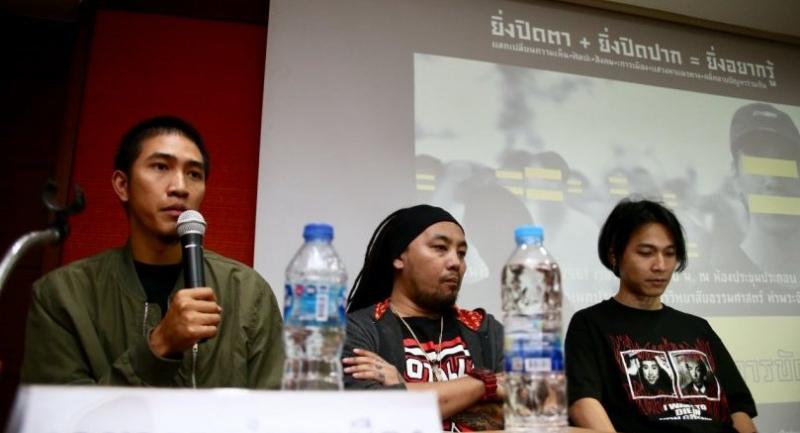 Thammasat lecturers say rappers are reflecting sentiments of the masses. THE DEFENCE Ministry yesterday called on relevant authorities to review the music video of the rap song, “Prathet Ku Mee” (My Country’s Got…), which has already garnered more than 23 million views on YouTube, particularly the scenes that refer to the 1976 massacre at Thammasat University.

Defence Ministry spokesman Lt-General Kongcheep Trantravanich said he wanted to ask why the producers had decided to refer to the October 6, 1976 massacre by depicting men taking turns hitting a corpse hanging from a tree.

“The scenes only depict their personal satisfaction from violence,” he said, adding that relevant authorities should examine the video to see if it reflects violence in society or if it intends to stir violence.

He said he was speaking on behalf of a government subcommittee on building reconciliation in the country.

Some professors, meanwhile, applauded the song, saying it was a challenge to the “dictatorial” junta government, which has for long stopped people from expressing their views. They were speaking at a seminar on “Art, Power and Disobedience” held by Thammasat University yesterday.

Visual Arts lecturer Thanom Chapakdee said the song was liberating for people affected by censorship and the limits put on their freedom of expression by the government via the use of laws such as Article 44.

“The people are starving and looking for someone to speak for them. Now people are brave enough to press ‘like’, but too afraid to sing along,” he said.

He pointed out that art was being screened and artists had to look for alternatives. This rap number, for instance, was released online using blockchain technology, which makes it impossible for the government to delete the file or block access.

Sawatree Suksri, Thammasat law lecturer, said dictators ban political art because it can have a very strong impact on people. It is easy to understand and makes convoluted political issues understandable, she said. Earlier, anti-government songs could easily be banned for reasons like being a threat to “national security” or “morality”. But “Prathet Ku Mee” is different. It was uploaded to YouTube on October 22 by the Rap Against Dictatorship group and had attracted 23.6 million views as of press time yesterday with tens of thousands of comments.

The number of views skyrocketed after some senior government officials, including Prime Minister Prayut Chan-o-cha, made harsh comments. Police threatened to take legal action against the band, but later changed their mind and chose to stay quiet.

Nutthapong Srimuong, who raps under the alias Liberate P, said he had rejected an offer from “somebody” to produce a rap song for the election campaign earlier.

“I don’t think rapping is okay in campaigning for votes. It’s more about saying what you think and what you feel,” he said.

Sawatree said the authorities have had to swallow their words because they realised that the more they tried to close people’s eyes and ears, the more people will want to hear it.

However, she does not believe this small victory would end censorship. “The rappers are lucky to get away this time, because it is in the public interest,” she said.

Earlier, the government had said that the group might be violating the Computer Crime Act, which prohibits information that is inconsistent with the truth and might undermine national security.

Personally, Sawatree said, she believes the song is telling the blatant truth: “This is a country where the government is untouchable and the police uses the law to threaten people.”

Meanwhile, Deputy Prime Minister Prawit Wongsuwan said yesterday that though he had not listened to the song yet, police would deal with it if there were anything wrong with it.

“I don’t know why I have to listen to the song. There can only be two reactions to it, you love it or you don’t,” he said.

The lyrics also mention Prawit’s controversial collection of luxury watches, which is still being investigated by the National Anti-Corruption Commission.

Meanwhile, National Police chief Pol General Chakthip Chaijinda said the band should consider coming up with a song about tourism and the conservation of Thai culture. “I want the band to write a song that shows all dimensions of the country, which has many aspects,” he said.