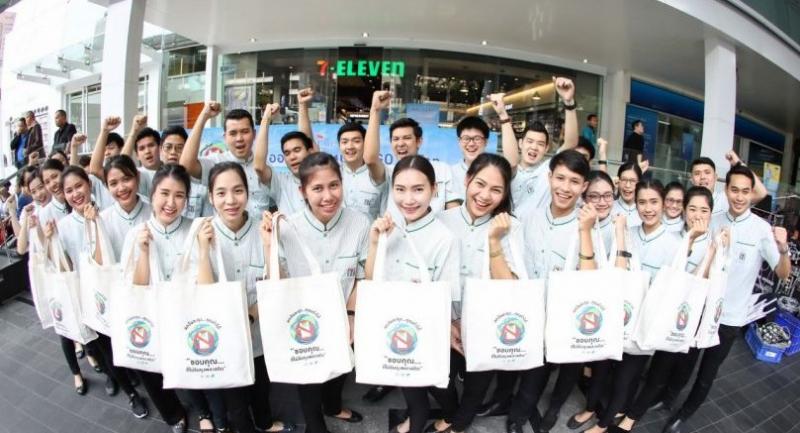 Following its “7 Go Green” policy, CP All, the founder of 7-Eleven in Thailand, has begun a campaign to “reduce and stop” plastic bags at its stores nationwide.

In a press release issued by the company on Thursday, Tanin Buranamanit Managing Director and Chief Executive Officer of CP All, the founder of 7-Eleven in Thailand, said that CP All has initiated the project to encourage the public to reduce and stop plastic bags since 2007.

The firm said it is determined to nourish sustainable environment via the company’s various programs, in accordance with CP ALL’s brand purpose “giving and sharing opportunities for all”.

Tanin said: “We use this month to announce our mission to reduce and stop plastic bags in 7-Eleven stores nationwide. We urge all Thais to simply stop using one plastic bag per day, everyday. Doing so would help mitigate global warming. CP All had received the cooperation from the consumers and tourists using 7-Eleven services in the efforts. They recognized the negative impacts of plastic bags on the globe.

The company recently extended the plastic bag reduction initiatives to universities, hospitals, and natural tourist attractions, deeming that these places are important to the push for Thailand’s tourism industry’s growth.

To achieve that goal while conserving the environment in these natural tourist attractions, the company had introduced the “preserving the Andaman Sea, reducing plastic bags” activity. The event was a joint effort among CP Group, the Department of Environmental Quality Promotion, the Tourism Authority of Thailand, the Green World Foundation, the Ministry of Natural Resources and Environment, the Department of Marine and Coastal Resources, national parks on several islands, various local communities, and the public.

These activities had been held in Lanta, Yao Noi-Yao Yai, Lipe, Phi Phi, Tao, and Samet islands. CP All and its alliances in each island have organised these campaigns to encourage youths, tourists and members of the public to reduce and abolish plastic bags. It is also one of the initiative’s objectives to instil the new behaviour that caters to the sustainable conservative tourism.

“The company invited all people to reduce and stop plastic bags through four campaigns in 7-Eleven stores in the participating islands. They are stopping the use of the small plastic bags except for hot food; abolishing plastic cap seals for water bottles; replacing plastic packs for straws with paper packs; and installing bins for waste separation in all 7-Eleven stores, in order to manage garbage from the upstream for the community. We have also established communication plans to promote the movement to reduce and abolish the use of plastic bags in all forms”, stated Tanin.

Tags:
7-Eleven Reduce and Stop Use of Plastic Bags CP All 7-Eleven launches reduce and stop