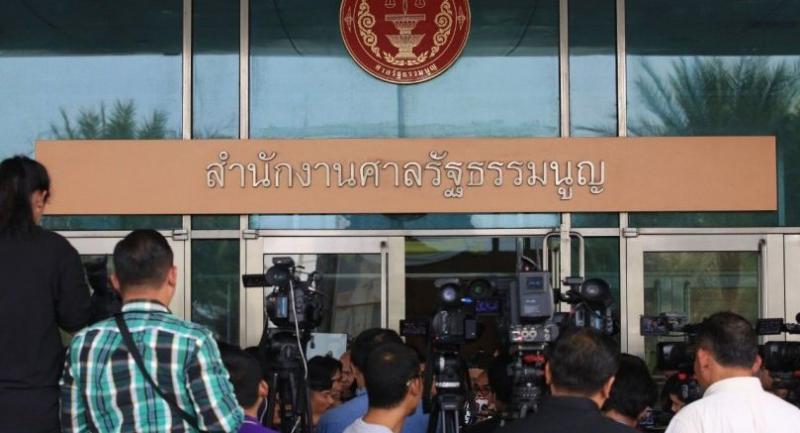 Judges allow them to function as lawmakers, saying media shareholding case against them different from that of suspended thanathorn

THE CONSTITUTIONAL Court yesterday agreed to accept a petition against 32 MPs from the military-aligned bloc over their alleged shareholdings in a media company, but allowed them to continue their parliamentary duties in an order that differed from that imposed on anti-junta politician Thanathorn Juangroongruangkit.

The court reasoned that the 32 MPs should not be suspended because it was still unclear if the businesses in which they had invested could in fact be considered media.

The court said this case was different from that of Thanathorn, in whose case the junta-appointed Election Commission had already conducted an initial investigation to confirm wrongdoing before the case was forwarded to the court.

There was also evidence to suspect that the suspended MP may have breached the law, the court said, explaining its decision to suspend Thanathorn from his MP duties.

There was no committee investigating the 32 new cases before they were submitted to the court, the judges said, adding since the matter was still unclear, the MPs should not be suspended from their parliamentary duties.

Nine other MPs who had also been subject to complaints for possibly breaching the Constitution by holding media shares were spared in yesterday’s decision. The court turned down the petition to scrutinise them.

The court said its examination of the documents presented by the plaintiff showed that the companies in which these nine MPs had invested did not have an objective to run a newspaper or any type of media business.

The 41 MPs, like Thanathorn, had been accused of holding shares in media companies. The petition had been filed by Future Forward MPs through the parliamentary mechanism and submitted to the Constitutional Court with endorsement by House Speaker Chuan Leekpai.

The 2017 Constitution prohibits shareholdings in media companies for MPs and MP candidates. Violation of the rule is punishable with disqualification of the MP, imprisonment and fine, as well as a 20-year ban from politics.

Prior to the court’s decision yesterday, there was lot of public interest in the cases.

Many had been waiting to see if the junta-aligned MPs would be suspended, following the same standards as those Thanathorn was subjected to earlier. Others had appeared concerned that additional problems would ensue if a such a big number of MPs were suspended from Parliament.

The court’s decision to allow the embattled MPs to continue their work in the lower house favours the pro-junta bloc, which has only a slim majority over its rival bloc.

In a move that further helped fortify the pro-junta bloc’s power in Parliament, the lower house yesterday declined a motion to scrutinise the selection of senators.