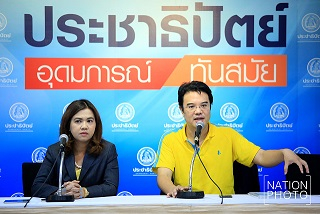 Prinn, also deputy party leader, told a press conference at the Democrats’ head office that his "modern economic team" had recently visited farmers in Khon Kaen, Roi Et and Maha Sarakham and found that both urgent and long-term action was needed to solve water shortages due to prolonged drought. Noting that recent rain-making operations had not covered drought-hit areas such as Thung Kula Ronghai in Roi Et's Kaset Wisai district, Prinn promised to coordinate with the Agriculture and Co-operatives Ministry permanent secretary on future efforts to seed clouds.

As a longer-term solution, he said a proposal for so-called “monkey cheeks” water-retention areas to supply rice-growing zones all year round would be sent to the incoming Agriculture Minister, a Democrat Party member.

Prinn said that, since the problem of overwhelming debt still afflicted nearly all farming communities, his team would push the Bank for Agriculture and Agricultural Cooperatives to restructure debts and offer repayment leniency, as well as promote good saving habits and spending discipline among farmers. He also said more ways must be found for farmers to boost their incomes and ease debt burdens, including by organising agricultural attractions in communities, processing farm produce into premium-quality organic products, and exploiting digital channels to sell products online, perhaps with the help of e-commerce training from the Commerce Ministry.

Noting ongoing attempts to develop new rice strains, Prinn said that people should instead focus on coaxing already-existing strains to yield better crops, adding that the related ministries of Agriculture and Co-operatives and of Commerce should discuss this together.

"The problem-solving attempts must aim to create sustainability in order to be effective in improving the economy and people's life quality," Prinn said, expressing confidence that Democrat ministers would be able to tackle the issues.