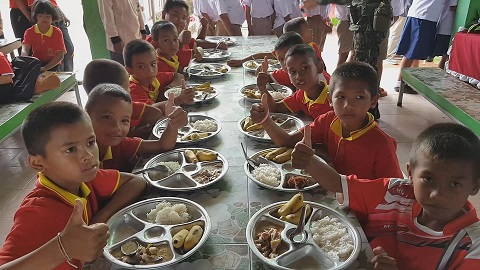 Anupong said the schools should add a condition to the contracts that allows for revocation or other measures in the event that pupils’ lunches are of insufficient quantity or quality.

As well, a district-level committee should be established to regularly conduct random and impromptu checks on school meals. Also, food caterers must make public the day’s menu list to ensure that everyone is aware, he said. Anupon urged parents to help keep an eye on the school-meal programmes.

If corruption occurred over school lunches, the culprits would face punishment under both criminal and civil codes, along with disciplinary punishment if a state official was involved, Anupon added.

A day earlier, Office of Basic Education Commission (OBEC) secretary-general Suthep Chittayawong revealed that he had ordered primary educational service area offices nationwide to check on the free lunch programmes for kindergarten and primary pupils in their jurisdictions. They must ensure the programmes were implemented with transparency and fairness and must report back to OBEC by July 22. If there were irregularity allegations, the school director and the respective primary educational service area office must launch a fact-finding probe and proceed with steps to punish the wrongdoers, he added.

At least four schools in the northeastern province of Nakhon Ratchasima had supplied students with substandard lunches due to possible irregularities, the National Anti-Corruption Commission (NACC)’s Region 3 office had discovered.

Suthep said that his office had already contacted the NACC for the information to take actions against the schools.

Suthep’s comment on Monday and Anupong’s comment on Tuesday responded to Prime Minister General Prayut Chan-o-cha’s order on Sunday for the Education Ministry, the Interior Ministry and the NACC to solve the issue of alleged corruption in free lunch programmes at schools nationwide.

NACC’s Region 3 office had randomly checked on schools in Nakhon Ratchasima’s 32 districts, said office executive Mongkol Sarisut. The four schools – whose names have not been released by the NACC –were now being probed after various irregularities were discovered. One issue involved less than half of the school lunch budget being spent to buy cooking ingredients, with the school unable to explain where the other half had gone. Other issue suggested that the school’s lunch budget was spent on other activities, while in another the budget intended for lunches for primary students was spread thinly to also cover lunches for secondary students and teachers, raising concerns about meal quantity and nutrition.

Mongkol said that with Bt20 per head devoted to lunch, Thai primary students should get a sufficiently large and nutritious meal.