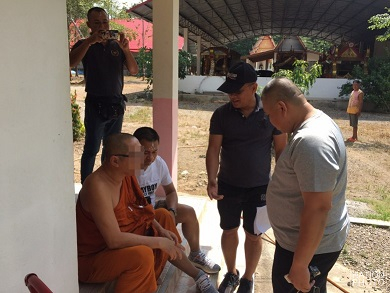 A 50-year-old monk at a temple in the southern province of Surat Thani’s Khian Sa district was arrested on Thursday over allegations of raping boys years ago while he served as an abbot in the northern province of Chiang Mai.

The suspect maintained he was innocent but officers of the Anti-Trafficking in Persons Division of the Royal Thai Police had him defrocked and sent to face legal action in Chiang Mai.

Inspector Pol Major Torsakul Saensurirangsikul led the team to arrest Phra Teeradech Khajornsuk under a warrant issued in 2016 by the Chiang Mai Court over charges of molesting and raping a minor under 15 and raping another minor aged over 15.

Torsakul told reporters that the arrest stemmed from a period when Phra Teeradech served as an abbot at Chiang Mai’s Mae Taeng district in 2013. Together with four other monks, he is alleged to have lured boys aged 14-16 to commit lewd acts and rape them. Previous cases had led to the defrocking, arrest and prosecution of Phra Teeradech and the four other monks.

After completing time behind bars, the former abbot again entered the monkshood at the southern temple, Torsakul said, but a police investigation found additional rape victims. Officers secured the arrest warrant for those alleged offences and searched for him until they were able to make the arrest on Thursday.