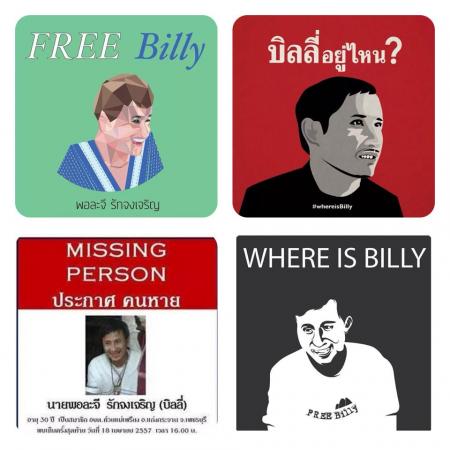 The disappearance of prominent Karen activist Porlajee “Billy” Rakchongcharoen has proved to be very difficult to investigate, the Department of Special Investigation (DSI) has admitted amid a conspicuous lack of progress in the case.

Pol Lt-Colonel Korrawat Panprapakorn, DSI deputy director-general, disclosed that his staff had been struggling to solve the mystery of “Billy’s disappearance ever since it stepped in and took over the investigation from the police one year ago. Part of the difficulty had been the length of time that had elapsed.

“We have not been idle. We are continuously trying to dig up more evidence but as this case is already five years old and most of the witnesses are too afraid to speak out, we are finding it very challenging to obtain new evidence,” Korrawat said.

“We are now pursuing a new lead, which could take us to important evidence, but we have to keep it confidential because if it is disclosed it could jeopardise the investigation.”

Billy was campaigning for the human rights of the indigenous Karen community in Phetchaburi’s Kaeng Krachan National Park when he became embroiled in a conflict with national park officers.

He was last seen on April 2014 being arrested by officers under the command of the-then Kaeng Krachan National Park chief Chaiwat Limlikhit-aksorn.

Leading human rights lawyer Surapong Kongchantuk has rejected Korrawat’s claims and insists that the lack of progress in the case cannot be simple blamed on “difficulties” in unearthing new evidence. Instead, he says, it reveals more about the officers’ failure to act to dig up the truth.

“It was very clear from the circumstances before the disappearance of Billy who could be the potential suspect,” Surapong claimed. “Moreover, the DSI also worked with the police from the outset, so it had plenty of opportunities to get hold of important evidence.”

He urged the DSI to be more proactive in furthering the investigation as “Billy”’s disappearance had been key to the failure of the Kaeng Krachan forest complex to be accepted as a UNESCO World Heritage Site. He said another reason for the department to do all it could to solve it was that the case had been in the global spotlight as had the alleged serious violations of human rights against the Karen community in Kaeng Krachan National Park.