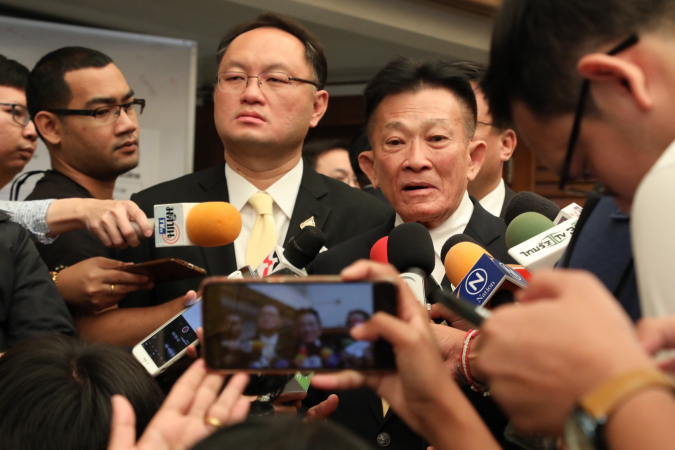 The Opposition plans a censure motion towards the end of the year against the new government led by General Prayut Chan-o-cha, newly-elected Pheu Thai Party leader Sompong Amornwiwat said on Friday.

Sompong will be effectively Opposition Leader since Pheu Thai is the largest party lined up against the government.

He said opposition MPs would start scrutinising the government during the House of Representatives debate in September on its Budget statement for the next fiscal year.

"We will look carefully at how the budget is spent," Sompong said. "Next, there will be a no-confidence debate around the end of the year," he added, without specifying precisely which aspects of government policy would be targeted.

Sompong questioned a remark by Prayut that he did not want his government to be "overthrown" by Parliament, saying Parliament was unlikely to bring any government down.

However, he added: "It all depends on the government. The people will see for themselves [how the government performs]. The PM should be hard-working.”

The 78-year-old was speaking shortly after being elected unopposed as the new Pheu Thai leader at the party's general meeting.

The veteran politician was asked to comment on media reports that Pheu Thai patriarch Thaksin Shinawatra was planning to wash his hands of Thai politics for good. He said he could not answer that because he had not been in touch with the former premier for some time.

"Admittedly, the party was created by Thaksin," Sompong said, “but people in the party can now work by themselves.”

Thaksin, who was ousted from power in the 2006 military coup, has lived in exile overseas.

He left the country in 2008, shortly before the Supreme Court's Criminal Division on Political Office Holders sentenced him to two years in jail for abusing his power while serving as prime minister.

Arrest warrants were later issued for him in connection with other criminal cases against him stemming from his time as head of government.