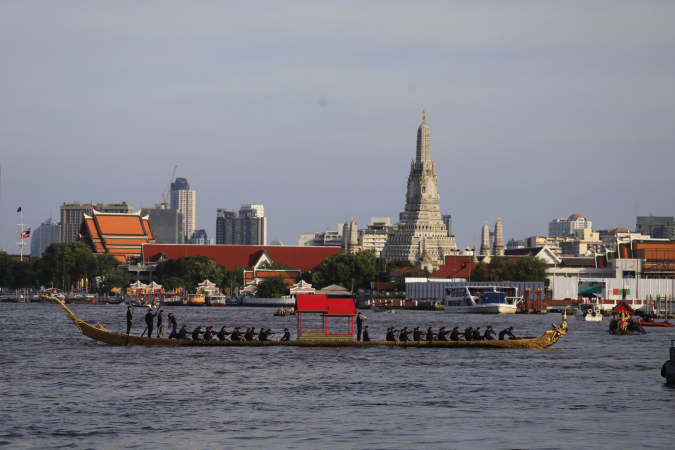 Preparations for the royal river procession of His Majesty the King got into full swing on Monday, when the man in charge of security, Deputy PM General Prawit Wongsuwan, appointed officials to oversee the 700-year-old ceremony.

The procession, which takes place on October 24 as part of ceremonies surrounding the coronation, is preceded by eight formal rehearsals beginning on August 22.

Gaiboon Suatsong, commander of Police Strategy, was invited to take charge of security and traffic management for the public spectating areas on both sides off the Chao Phraya River.

A shuttle bus service, royally sponsored kitchen, and toilets will be provided for the crowds witnessing the ceremony. All spectators will be screened on entry as part of security measures.

Officials have asked that riverside businesses refrain from reserving areas or raising food prices during the procession and rehearsals.

Captain Wasin Sasrida, director of the Naval Operations Department, said the river procession would feature 52 royal barges arranged in five rows. The four main royal barges – the Subhannahong, Anantanakkharat, Anekkachatphuchong, and Narai Song Suban HM Rama IX – would be propelled by some 2,000 oarsmen in a procession stretching 1.2 kilometres. The King will travel in the Subhannahong Royal Barge.

Teeraphat Prayusid, a representative of the inspector-general, said 904 volunteers had been assigned to help clean up the riverside area both before and after the ceremonies. Volunteers will also help manage traffic.

General Thani Chuichai, an adviser to the First Army, said the military would prepare six security and traffic management zones, three on either side of the river. Soldiers will also join forces with police to protect the estimated 40,000 people who will turn up to witness the historic occasion.