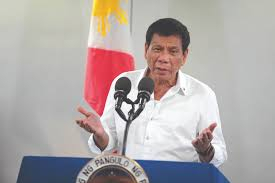 MANILA, Philippines – Cutting diplomatic ties with Iceland, which filed a UN resolution to look into human rights situation in the Philippines, may adversely affect the estimated 2,000 overseas Filipino workers in the European nation, President Duterte admitted on Wednesday.

“I’m seriously considering because it might affect the relations between our citizens and the host country,” Duterte said in an interview with Pastor Apollo Quiboloy’s Give Us This Day show.

“They might not like the way we behave towards them and so they will be prompted to take measures,” he added.

The Philippines and Iceland established diplomatic relations in February 1999.

Duterte’s show of disdain towards the Nordic island nation was triggered after the United Nations Human Rights Council (UNHRC) adopted the Iceland-led resolution to probe the supposed human rights abuses in the Philippines amid the war on drugs.

The President had earlier mocked Iceland as an “ice-eating” nation, and said critics of his brutal war on drugs as “fools.”

While Foreign Affairs Secretary Teodoro Locsin said the Philippine’s won’t cut ties with Iceland, Duterte said he has the sole prerogative to decide on the matter.

“In our dealings with other nations it is only the Office of the President of a country who has that prerogrative. Siya lang, ako lang,” he added.

“I hope they do not have to do it because I won’t take it sitting down,” he said.

He said he was surprised that Iceland “has always been a country complaining about extrajudicial killings.”

“Wait until the drug menace reaches their shore and I will answer,” he said.