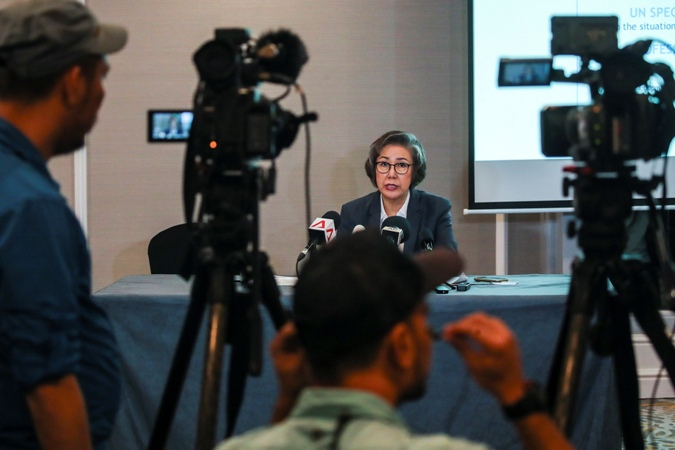 Prof. Yanghee Lee is at a press conference in Kuala Lumpur on Thursday -- EPA

The violation of human rights in Myanmar is giving rise to serious issues for countries in South and Southeast Asia, yet Nay Pyi Taw continues pressuring its neighbours to look away, a United Nations senior official said after completing her mission to Thailand and Malaysia.

The UN is urging Asean, whose foreign ministers will meet in Bangkok later this month, to prioritise human-rights issues and get fellow-Asean member Myanmar to fulfil its obligations.

UN Special Rapporteur on Myanmar, Prof Yanghee Lee, completed her 11-day fact-finding mission in Thailand and Malaysia on Thursday. As part of her mission, she met with interlocutors who provided her with information that she will include in her report to the UN Human Rights Council in September and the UN General Assembly in October.

She said Myanmar is grossly violating people’s rights and has blocked her access to the country since late 2017. So far, more than 1.5 million Rohingya have fled violence in Myanmar, and have been trying to seek shelter in Bangladesh, India, Indonesia, Malaysia and Thailand. Many of these refugees have also suffered from human trafficking and smuggling, she said at a press briefing in Malaysia.

“While in Thailand, I was extremely disturbed to hear about Singapore deporting six Myanmar nationals for allegedly supporting the Arakan Army [AA],” Prof Lee said.

“The six were then arrested upon returning to Myanmar and are now being detained incommunicado. I’m extremely concerned about their situation in view of the recent deaths of Rakhine men in custody, who were also detained on suspicion of being associated with the Arakan Army in the Rakhine State,” she said.

“I urge Singapore to uphold its customary obligation to international law and not return people to places where they may be tortured.”

More than 740,000 Muslim Rohingya have fled to Bangladesh since August 2017 after a spate of violence as part of Myanmar’s so-called “cleansing operation”.

Clashes have continued since then, and the conflict between the Tatmadaw (Myanmar military) and the AA is still raging, with reports indicating that human-rights violations and abuse against the civilian population is worsening, she said.

Prof Lee also confirmed what members of the Rohingya community had told The Nation last week, that the internet blackout is also preventing them from contacting her.

“It’s challenging to get information on what is happening on the ground under these circumstance, but I have been told that three villages in Rakhine have been burned down by the Tatmadaw in the past two weeks,” she said.

The UN Rapporteur also reported the spreading of hate speech and misinformation targeting ethnic minorities and LGBTQI. “I was told of large-scale, coordinated anti-democracy, anti-rights and anti-equality campaigns waging on in the social media with the aim of manipulating public opinion on a variety of issues,” she said.

“I’m distressed that on this mission, I have received reports of women and girls, some as young as nine, being trafficked from northern Myanmar to neighbouring countries for sex work. Years of conflict in northern Shan and Kachin states have left families in financial desperation, making women and girls vulnerable to human trafficking,” she said.

The peace process carried out by the government will not move forward if the Rakhine conflict continues, she said, adding that the unilateral ceasefire in the five northern and eastern regional commands may have been meant to persuade the northern ethnic armed organisations to sign the Nationwide Ceasefire Agreement.

“However, it is impossible for the Tatmadaw to build trust with them if it simultaneously continues trying to ‘crush’ the AA, which is allied to several of the organisations as part of the Northern Alliance,” she said.

Despite the ceasefire, there have been several clashes between the Tatmadaw and ethnic armed organisations in Shan State. The Tatmadaw even led an attack against the Shan State Progressive Party immediately after the Peace Commission held peace negotiations with the party. This two-faced behaviour is indicative of the Tatmadaw’s divide-and-rule policy, showing that it is not really interested in doing what is necessary to create lasting peace, she said.

The ongoing violation of human rights in Myanmar is also jeopardising the lives of people and having a relentless impact on its neighbours in such a way that it could threaten the peace and security of South and Southeast Asia. Hence, she said, this issue should firmly be on the agenda when regional states engage with Myanmar.

“I therefore most strongly urge Asean to prioritise human rights in Myanmar, and hold the Myanmar government to its obligation to respect, protect and fulfil human rights,” she said.