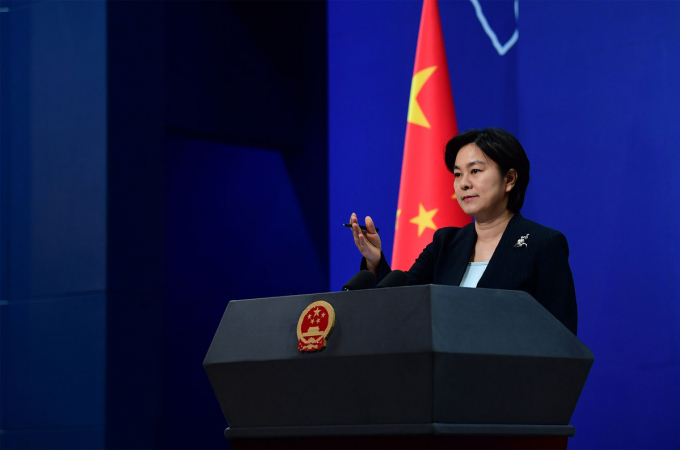 Hua Chunying, spokeswoman and director-general of the Foreign Ministry Information Department, speaks about Hong Kong at a news conference in Beijing on Tuesday. [Photo by XUE WEI/FOR CHINA DAILY]

The Foreign Ministry said on Tuesday the extreme, violent incidents that happened in the Hong Kong Special Administrative Region over the weekend had nothing to do with freedom of speech or assembly, but are unlawful acts that challenge the bottom line of the "one country, two systems" principle.

Hua Chunying, ministry spokeswoman and director-general of its Information Department, made the remark a day after the United States Department of State expressed concern over recent protests in Hong Kong and urged the SAR government to respect people's freedom of speech and assembly.

In the ministry's daily news conference in Beijing, Hua stressed that the unlawful acts in Hong Kong have undermined the city's rule of law and violated the SAR's Basic Law and other local laws.

She said that the central government supports the SAR government in exercising law-based governance and supports the police in bringing offenders to justice in accordance with the laws to safeguard Hong Kong's law and order.

Hua said that people from various sectors in Hong Kong have peacefully assembled to denounce violent acts. The central government believes most Hong Kong residents have a clear understanding of the nature of and hazards presented by radical protesters' violent and unlawful acts for the community.

She reiterated that the HKSAR is part of China, and the country firmly opposes any foreign intervention in the SAR's affairs, referring to foreign countries' false remarks and allegedly secret manipulation by the US behind the city's recent protests.

On Sunday, Hong Kong saw violent incidents in two separate locations following a peaceful protest against the now-suspended extradition law amendments. Radical protesters besieged the Liaison Office of the Central People's Government in the HKSAR. They defaced the national emblem mounted at the entrance and sprayed offensive graffiti on the outer wall.

Later that night, a group of men indiscriminately attacked protesters, journalists and passersby in Yuen Long, a densely populated area in the northwestern New Territories, leaving 45 people injured. At least six were arrested.

Also on Tuesday, a spokesman for the ministry's Office of the Commissioner in the HKSAR expressed firm opposition to "false remarks", urging the United States to immediately stop sending out wrong signals on violent and illegal acts in Hong Kong.

The spokesman stated that it is widely recognized that the "one country, two systems" principle has been faithfully implemented since the return of Hong Kong, and that people of Hong Kong enjoy unprecedentedly extensive democratic rights and freedoms in accordance with the law.

The US accusation of "erosion of Hong Kong's autonomy" is a biased and groundless smear attempt driven by political motives, the spokesman said.