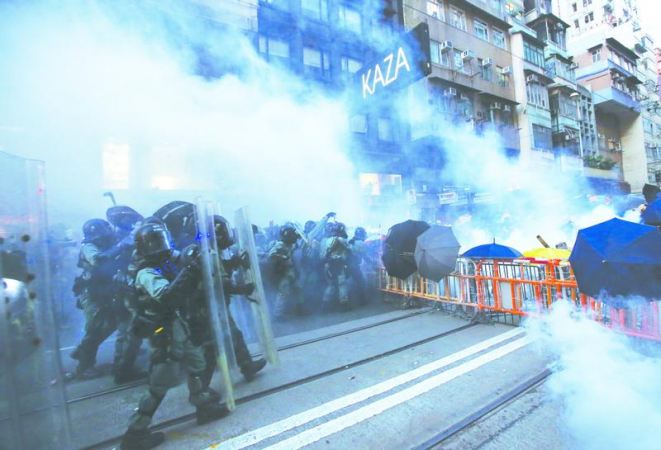 Clouds of tear gas waft down the street as police officers struggle to disperse protesters in an unauthorized rally in Sheung Wan on Sunday. (CHINA DAILY)

HONG KONG-Some of Hong Kong’s key business and shopping districts — from Causeway Bay to Sai Ying Pun in the western part of Hong Kong Island — were paralyzed on Sunday as police fought pitched battles with hundreds of anti-extradition bill protesters for the second day in a row.

The stand-off was particularly tense in the Western district and Sheung Wan, where police fired tear gas and rubber bullets to disperse demonstrators who charged police cordon lines by hurling bricks, umbrellas and bottles, and pushing burning trolleys at advancing officers.

Police managed to disperse the protesters around midnight after about five hours of clashes, with scores of people injured.

The special administrative region government denounced the violent behavior of radical protesters, who “flouted the rule of law” and “breached society’s peace and order”, and vowed full support for the police in rigorously enforcing laws.

The chaos erupted after thousands of protesters veered from a rally at Chater Garden in Central that had been earlier approved by the police, and marched in various directions, with one group heading to Western, while others proceeded to Wan Chai and Causeway Bay.

In Wan Chai, protesters swarmed the Golden Bauhinia Square and defaced the statue symbolizing Hong Kong’s return to the motherland in 1997, while others erected barricades in front of the Sogo Department Store in Causeway Bay.

By 8 pm, protesters had almost dispersed from the Sai Ying Pun area, with some still holding out in adjacent areas. MTR train services to Sai Ying Pun, HKU and Kennedy Town stations had to be temporarily suspended. 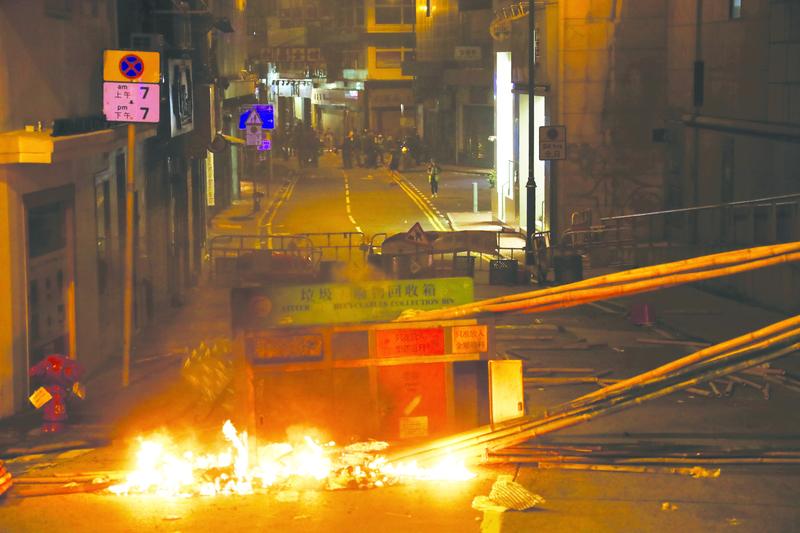 At around 8:30 pm, police issued a statement condemning protesters for escalating the violence by setting fire to trolleys carrying cardboards and pushing them at police officers. Arson was also committed at various locations. Protesters, wearing face masks, also defaced walls of buildings with graffiti and dismantled metal railings along pavements as they marched along streets in Central, Wan Chai and Causeway Bay despite repeated police warnings.

China Daily reporters, who were taking photos at the scene, were warned and trailed by masked protesters, who swore at them and used umbrellas to stop reporters from taking pictures.

In a standoff with police near the Liaison Office of the Central People’s Government in the HKSAR in Sai Wan, protesters repeatedly used metal rods and umbrellas to confront the police.

Sunday’s unauthorized protest started at around 4 pm after thousands of people had gathered at Chater Garden in Central, and occupied Hennessy Road as they marched toward Wan Chai and Causeway Bay, bringing traffic to a complete standstill, with more than 20 bus routes rerouted.

Another group of protesters headed toward Sheung Wan, declaring their target would be the liaison office, in defiance of police warnings that anyone joining the illegal procession would be prosecuted.

Senior superintendent of the police public relations branch, Yu Hoi-kwan, told a news briefing at police headquarters that the public had been urged to take part in the Chater Garden rally in a peaceful and lawful manner, but the appeal fell on deaf ears.

She warned that public safety would be endangered if violent clashes broke out again, as was the case in Yuen Long on Saturday, when hundreds of protesters again fought running battles with the police, leaving more than 20 people injured.