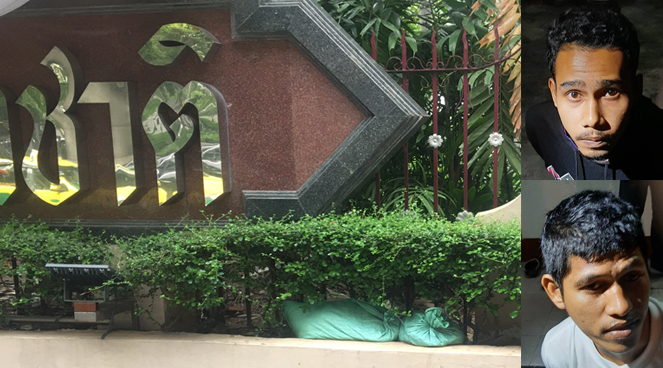 Two men were arrested early Friday aboard a south-bound bus in Chumphon province on suspicion of placing two fake homemade bombs in front of the Royal Thai Police headquarters on Thursday evening.

A police source said the two were arrested at the Pathom Phon police checkpoint on Phetkasem Road in Tambon Wang Phai of Chumphon’s Muang district and were taken to Bangkok for questioning. Senior police officers are expected to make an official announcement later today.

Police cordoned off the section of Rama I road in front of the Royal Thai police HQ on Thursday evening when two boxes with flashing LED lights were spotted under the headquarters’ sign.

A team of explosive ordnance disposal officers was sent in to check and found a potato chip box and a juice box made to look like homemade bombs. They contained a detonator circuit board and metal pellets but no explosives.

Police checked footage from security cameras and saw a slim man dressed in a yellow shirt and black trousers and wearing a hat and a face mask, walking to the spot before throwing down the two boxes and leaving.

After the incident, police tightened security around the police headquarters and sent officers to patrol Rama I Road from the Ratchaprasong to Chalermphao intersections and along Henri Dunant Road around the clock.

Inside the police headquarters’ compound, the Special Branch Police also assigned teams of policemen to patrol the area.

The source said the two suspects were arrested because they were caught on security cameras around the Royal Thai Police headquarters. One of the men was keeping watch while the other suspect walked to the spot to throw down the boxes.

The two were later seen walking to meet each other on the Skywalk of BTS Skytrain Siam station before entering Siam Paragon shopping mall.